The Takeaway: Is Erdogan wooing Biden by antagonizing Iran and Russia? 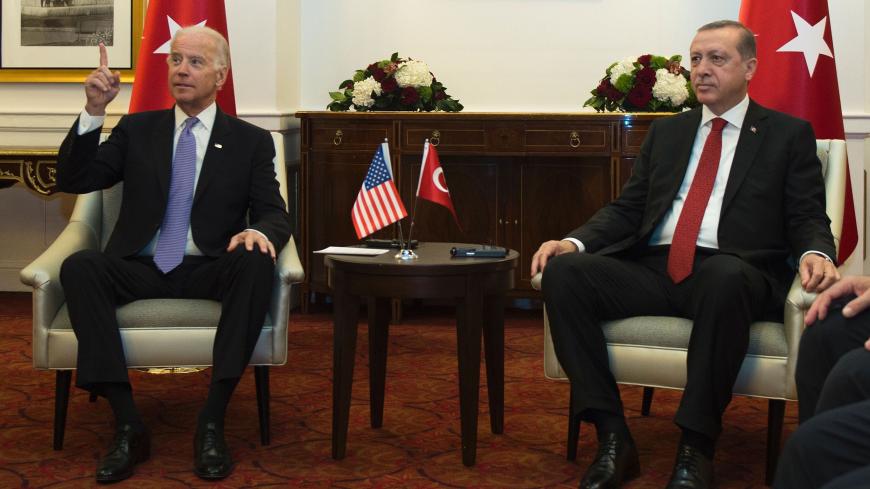 Then-US Vice President Joe Biden (L) gestures during a meeting with President Recep Tayyip Erdogan of Turkey on the sidelines of the nuclear summit in Washington, DC, on March 31, 2016. - ANDREW CABALLERO/AFP via Getty Images

Turkish friction with Russia and Iran: Tiff or rift, and does it even matter?

Turkish reset? Turkey, Russia and Iran have stayed somewhat unified in recent years, bound by the diplomacy of Russian President Vladimir Putin, shared opposition (if for different reasons) to US policy in Syria, and Ankara’s and Tehran’s mutual antagonism toward Israel, Saudi Arabia and the United Arab Emirates (again for different reasons). The magnetic pull of those common interests seems to be waning, though, and one reason may be that Turkish President Recep Tayyip Erdogan recognizes that his only protector in Washington, outgoing President Donald Trump, is leaving next month. A sign of more challenging days ahead is the Trump administration, on its way out, implementing congressional sanctions for Ankara’s purchase of the Russian S-400 missile defense system, as Jared Szuba reports.

Here are six signs of some possible changes in Turkish policy with regard to Iran, Russia and the United States, and what it might mean for a Biden administration:

In case you missed it: Daoud Kuttab says Mahmoud Abbas has ‘frozen’ the Palestinian movement

Al-Monitor columnist and media activist Daoud Kuttab breaks down the present and future of Palestinian politics, assesses the impact of Israel’s normalization agreements and the prospects for a renewed Israeli-Palestinian peace track, and explains why he is optimistic, and relieved, about a Joe Biden Administration … as well as my comment on the signals from Tehran on the pathways to a US-Iran nuclear deal. … The link to  the latest ‘On the Middle East’ podcast is here.