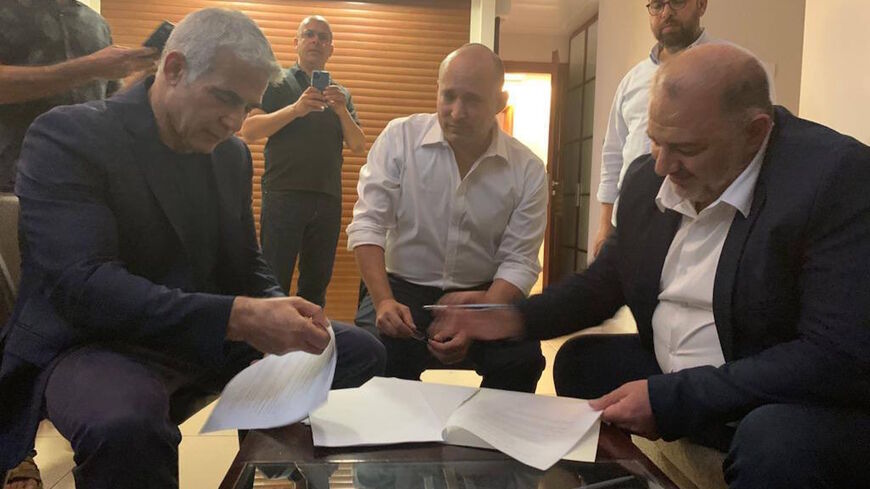 There was barely an hour to spare before the midnight deadline, but “There is a Future” (Yesh Atid) party leader Yair Lapid appears to have done the unthinkable by assembling a "change" coalition that removes Israel’s longest-serving prime minister, Benjamin Netanyahu, from power. Rina Bassist has the latest here on the politicking in the final hours.

Here are three quick takes on the new coalition, and what comes next:

A fragile coalition: The change coalition led by the centrist Lapid required all sorts of deal-cutting with New Right (Yamina) party leader Naftali Bennett, who will serve as prime minister first in a rotation with Lapid. The right-wing New Hope party, led by Gideon Saar, also signed on. These key pieces — which all need to hang together with no defection — agree on almost nothing except their commitment to oust Netanyahu.

Barrier broken: In the final hours, Raam (United Arab List) leader Mansour Abbas negotiated eye to eye, and in the open, with Israel’s power brokers. "For the first time in decades an Arab party is fully and openly participating in the political game," writes Afif Abu Much. Abbas used his newfound leverage to secure benefits for Israel’s Arab citizens, which make up 20% of the country’s population. As Abbas negotiated with the change coalition, Netanyahu was working the phones frantically with Abbas, offering more than what was promised from Lapid and Bennett, to no avail.

Israel, the US and Iran: The most divisive issue in otherwise rock-solid US-Israel relations remains Iran. Bennett is no less a hawk than Bibi on Iran. Expect this issue to remain an irritant in US-Israel relations as the United States and Iran proceed with a new nuclear agreement.

What’s next: The new government requires a vote by the parliament, or Knesset, on June 14. Netanyahu has less than two weeks to try to break off one or two Knesset members to stymie the Lapid-Bennett-Abbas change alliance. He will not give up until the final vote. If he succeeds, there will be a fifth election. If he fails, his next act will be far less to his linking: Likud party leader in the opposition. And meanwhile, his trial on allegations of deception, breach of trust, and receiving bribes continues.

1. Bibi’s betrayals came back to bite

Netanyahu lost this round not because of a verdict of Israel’s voters clamoring for a centrist pivot away from his right-wing politics, but was instead done in by his former allies on the right: Bennett, Saar and Yisrael Beitenu leader Avigdor Liberman.

In the final days, Netanyahu has tried to offer the position of “alternative prime minister” to a slew of rivals, each of whom has rejected his overture, because of yet another betrayal. They saw what happened to Blue and White leader Benny Gantz, who last year entered into a unity government with Netanyahu only for the embattled prime minister to break his word.

Ben Caspit puts it this way, “After [Netanyahu] reneged on his deal with Gantz, no one is willing to trust the offers he is now making left and right promising his rivals first shot at the premiership in a new power-sharing government.”

2. Will Hamas and Assad make nice?

According to recent reports, Syrian President Bashar al-Assad praised Hamas during a meeting of Palestinian factions last month. That led to renewed talk of rapprochement, and one Hamas leader telling Al-Monitor, “We are not closing any door that serves our cause,” including Syria.

The Gaza Strip's Sunni rulers backed the Syrian opposition seeking to topple Assad, and their leaders left the country in 2012. Rumors over a possible reconciliation between Hamas and Syria haven’t gone over well with many Palestinians. As Adnan Abu Amer writes, “The possible return of Hamas to Syria could burden the movement as it would have to convince its popular bases and supporters who reject any normalization with the Assad regime.”

Officially, the Sudanese army says its joint war games last week with Egypt had nothing to do with the Grand Ethiopian Renaissance Dam.

But as Mohamed Sabry writes, the show of strength comes as Ethiopia gears up to add 13.5 billion cubic meters of water to the dam reservoir in July. The country’s downstream neighbors fear the $4 billion megadam’s filling will harm their water supply, and talks aimed at resolving the yearslong dispute have ended in deadlock.

Ethiopia’s construction of the contentious dam has brought its rivals closer, and as Rasha Mahmoud writes, Cairo sees its own stability and security linked to Khartoum's. That’s partly why Egyptian President Abdel Fattah al-Sisi announced last month that his government will use Egypt’s share in the International Monetary Fund to help settle Sudan’s outstanding debts.

After six years in political exile, President Abed Rabbo Mansour Hadi has lost legitimacy in the eyes of many Yemenis. Hadi leads the internationally recognized Yemeni government but does so from Saudi Arabia, where he fled as the Iran-aligned Houthis advanced in 2015. Given the security risks, it’s not clear when, or even if, Hadi could make his promised return to war-torn Yemen.

“Hadi's six-year exile in Riyadh is not only a demerit to his political legacy but also a reflection of the Saudi-led coalition's failure to date in Yemen,” our correspondent in Yemen writes. The United Nations has since 2014 tried to broker a political solution, but to no avail. More recently, the Houthis rejected a US-backed cease-fire plan proposed by Saudi Arabia.

Israel is the latest country to explore launching its own digital currency. According to a model drawn up by the Bank of Israel, the worth of the digital shekel would be that of the regular Israeli shekel. Banks, credit cards and other payment service providers would transfer the digital coins to the public.

As Danny Zaken explains, Israel has no immediate plans to issue a cryptocurrency, but officials “acknowledge the need to prepare for international competition” as central banks around the world plan for government-backed digital versions of their currencies.

Impunity for the killing of Iraqi protesters is emboldening perpetrators and fueling a cycle of the violence, a new report from the UN Assistance Mission for Iraq (UNAMI) finds. Since Iraq’s anti-government demonstrations erupted in October 2019, UNAMI has documented “48 incidents of attempted or completed targeted killings of protestors and critics,” mostly by militia. At least 20 protesters abducted in the unrest remain missing.

Although the government of Iraq has taken steps to provide accountability, including making several arrests, not a single case has moved past the investigative phase. Read the full report here.

UNAMI sent the following update to Joe Snell: “The lack of accountability for the violations and abuses by unidentified armed elements highlighted in the report, contributes to the recurrence of these crimes and risks perpetuating an environment of fear and intimidation. This is amplified by the perception that such actors can act with impunity, shrinking space for public criticism and freedom of expression.”

What we’re listening to: Trauma in Israel’s mixed cities

Former Blue and White Knesset member Ruth Wasserman Lande says last month’s unrest was particularly traumatic for Jews living in Israel’s ethnically mixed cities, which were convulsed by riots during the latest conflict with Hamas. Lande blames Arab members of the Knesset for fueling the deadly protests and failing to “quiet the winds of violence.” Listen to her interview with Ben Caspit here.