Even if the two sides eventually normalize ties, Damascus faces an uphill struggle to return to the Arab League. 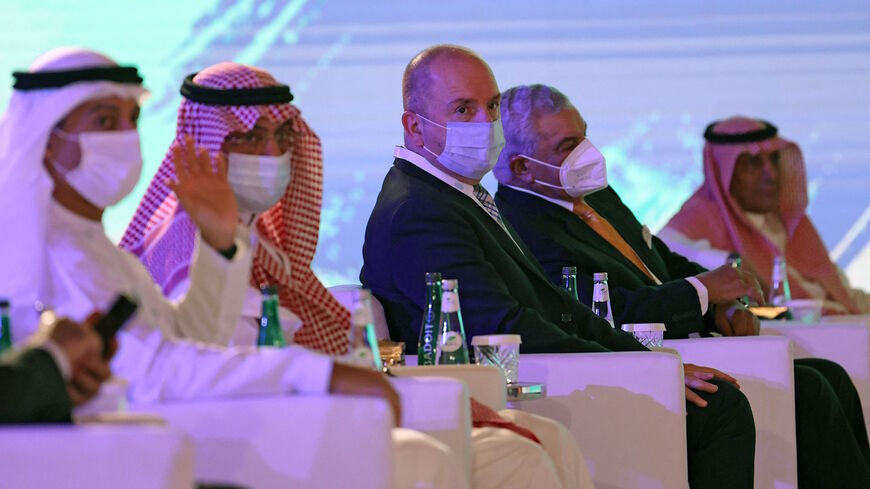 Syrian Tourism Minister Mohammed Rami Martini (C) attends a tourism conference in the Saudi capital, Riyadh, on May 26, 2021, despite tense relations between the two countries. - FAYEZ NURELDINE/AFP via Getty Images

On May 26, Syrian Tourism Minister Mohammed Rami Martini became the first Syrian government official to visit Saudi Arabia since the civil war began in 2011. Martini’s trip fueled speculation about a normalization between Riyadh and Damascus, as it coincided with a series of positive developments in Syrian-Saudi relations. On May 3, Saudi intelligence chief Lt. Gen. Khaled Humaidan met his Syrian counterpart Ali Mamlouk in Damascus. Hours after Martini’s arrival in Riyadh, Bouthaina Shabaan, a prominent adviser to Syrian President Bashar al-Assad, expressed optimism about a swift breakthrough in Syrian-Saudi normalization talks.

Despite these developments, there are grounds for skepticism about a swift revival of relations. Since Saudi Crown Prince Mohammed bin Salman acknowledged that “Bashar is staying” in a March 2018 interview, there have been repeated failed attempts to facilitate a normalization between Syria and Saudi Arabia. One such attempt in 2018 saw Saudi Arabia offer reconstruction investments to Syria if Assad broke with Iran and Hezbollah. Saudi Arabia’s unwillingness to emulate the United Arab Emirates and Bahrain, which reopened their embassies in Damascus in December 2018, further underscores the arduous path towards a Riyadh-Damascus rapprochement.

While recent events might be more than a false dawn, the most likely scenario is a gradual reestablishment of bilateral relations between Saudi Arabia and Syria. A Saudi commentator with close ties to the ruling family told Al-Monitor that a swift normalization between Saudi Arabia and Syria is unlikely due to anti-Assad sentiments in the kingdom. The commentator noted that these sentiments date back to Lebanese Prime Minister Rafiq Hariri’s assassination in 2005 and intensified due to Saudi media coverage of the Syrian conflict, “which extensively covered Assad’s atrocities and framed the Alawite regime as apostates.” The commentator argued that the UAE could disregard anti-Assad sentiments more easily than Saudi Arabia, as the UAE's population mostly consists of non-Arab foreign nationals, and Riyadh will incrementally engage with Assad to mitigate public backlash.

Harun al-Aswad, a Syrian journalist based in Turkey, echoed these views in an interview with Al-Monitor. Aswad predicted that “relations between Riyadh and Damascus will not return suddenly” but argued that a series of rumors and leaks will “pave the way for the gradual return of relations between the two countries without causing a shock in public opinion.” Aswad is confident that Saudi Arabia’s normalization with Syria will ultimately go ahead because “the Syrian opposition has proven its failure” and Riyadh cannot “invest in rebels who work as mercenaries in Libya and Azerbaijan instead of facing Iranian expansion in Syria.”

Even if Riyadh and Damascus eventually normalize relations, Syria faces an uphill struggle to return to the Arab League and is unlikely to receive Saudi reconstruction investments.

Egypt and the UAE have repeatedly argued that Syria’s suspension from the Arab League has done more harm than good. Arab countries that have consistently engaged with Damascus, such as Iraq, Algeria and Oman, concur with this view. Saudi Arabia’s entry into the pro-engagement bloc could bolster Assad’s acceptability in the region but is unlikely to change the positions of Qatar and Kuwait.

On March 12, Qatari Foreign Minister Mohammed bin Abdul Rahman Al Thani said the reasons for Assad’s expulsion from the Arab League remained valid, and on May 30 confirmed that Qatar had no plans to normalize with Syria. Kuwait insisted in 2018 that it would not reopen its embassy in Damascus unless the Arab League gave it a green light. Kuwait’s fundraising efforts for humanitarian aid to Syria further complicate its ability to embrace Assad’s regime.

Bashar al-Assad’s reelection for another seven-year term could soften Qatar and Kuwait’s positions over time, but there is no guarantee that the Arab League’s members will unite around reinstating Assad.

Saudi Arabia’s prospects of investing in Syria are equally slim. The Caesar Civilian Protection Act sanctions are a major obstacle to Saudi investment in Syria. UAE Foreign Minister Abdullah bin Zayed openly criticized these sanctions as they restrict private sector participation in Syria’s reconstruction. However, the United States has dismissed Abu Dhabi’s criticisms and insisted that the Caesar Act sanctions should remain in effect until there is an inclusive political settlement in Syria. Due to Mohammed bin Salman’s unpopularity in the US Congress and frosty relationship with the Biden administration, Saudi Arabia is unlikely to be more successful than the UAE in changing US opinion on the Caesar Act.

Even if an unlikely breakthrough in Syria’s constitutional negotiations causes the United States to revisit its sanctions on Damascus, Saudi Arabia and Syria are both wary of the consequences of economic cooperation. Saudi Arabia is also concerned that investments in the Syrian economy will unintentionally provide material benefits to Iran. Bassam Barabandi, a former Syrian diplomat, told Al-Monitor that Saudi Arabia had previously tried to counter Iranian influence in Lebanon and Iraq “by supporting moderate Shiite and Sunni political leaders and it failed.” Barabandi said he believes Saudi support for Assad would “empower Iran for free.”

Syrian officials view Saudi Arabia with grave mistrust and are unlikely accept Saudi investments if they dilute the Syria-Iran alliance. A former Russian ambassador to Saudi Arabia, Andrei Baklanov, who engaged with Assad during the early stages of the civil war, told Al-Monitor, “Many people in Syria feel offended by the treacherous position of Riyadh,” adding, “It will not be easy for Saudi Arabia to regain its credibility in Syria.” Baklanov recalls that Assad views Saudi support for the Syrian opposition as an ungrateful action, as Syria aligned with Saudi Arabia against Iraq during the 1990-91 Gulf War.

If Saudi Arabia does not overhaul its restrictive policies on umrah hajj visas and work visas for Syrian nationals, Damascus’ mistrust of Riyadh will likely persist.

A decade into the Syrian conflict, Assad has a broader array of partners in the Arab world than at any time since 2011. A normalization of Saudi-Syrian relations would reinforce Assad’s claims that he is no longer isolated from the international community but would do little to improve Syria’s increasingly dire economic outlook or encourage the international community to support an Assad-led Syrian reconstruction process.