Entering his new office, newly appointed Foreign Minister Yair Lapid told Israeli diplomats that he is there by choice and not by default, and that he is eager to start working with them. 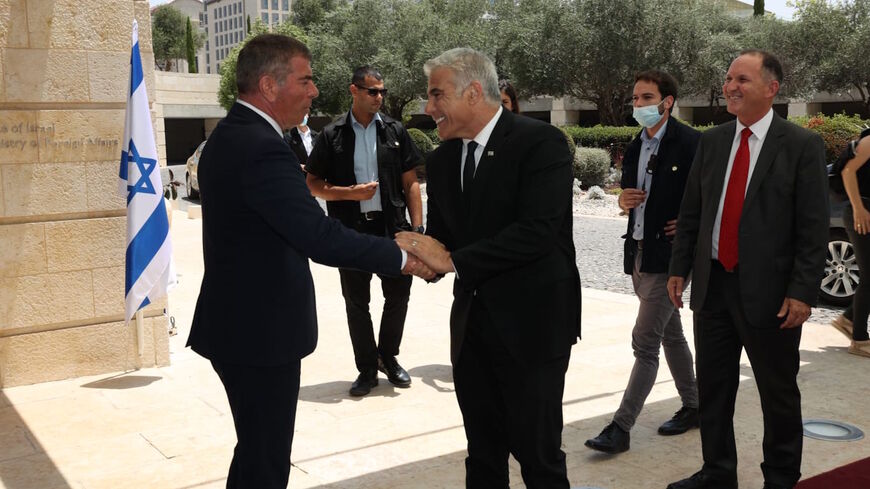 Israel’s new Foreign Minister (and alternate Prime Minister) Yair Lapid arrived this afternoon on June 14 to his ministry in Jerusalem for a changing-of-the-guard ceremony with outgoing Minister Gabi Ashkenazi. Earlier in the day, the ministry’s staff bid goodbye to Ashkenazi. The morning farewell ceremony from Ashkenazi was quite emotional, with seniors at the ministry acknowledging his commitment over the past year to restore its status and to restore the image of Israeli diplomats. Ashkenazi himself confessed how he enjoyed working with the professional Israeli diplomats, whom he qualified as “soldiers without uniforms.”

Indeed, Ashkenazi is credited with bringing positive change to a ministry long sidelined by Prime Minister Benjamin Netanyahu and his associates. In the short time he served, Ashkenazi concluded a series of cooperation agreements with Arab and other countries. The alignment of several European states by Israel’s side during Operation Guardian of the Wall in Gaza was also a refreshing change for the ministry compared with past years. Ashkenazi was the first Israeli foreign minister to visit Cairo in many years, and he put much effort into nurturing ties with Jordan. Clearly, Ashkenazi took his job seriously. More than anything, Ashkenazi won the trust and appreciation of Israeli diplomats when he launched an operation for vaccinating all those serving outside of Israel, either by bringing them and their families to Israel twice for both doses of vaccination or sending vaccination doses abroad, as was the case with Israeli diplomats serving in the United States.

That being said, Ashkenazi was confronted throughout his term in office with one big problem. Netanyahu continued managing Israel’s foreign relations on several levels, especially vis-a-vis the Americans, but also very much on the Arab, European and African fronts. The Abraham Accords were negotiated behind the backs of Ashkenazi and alternate Prime Minister Benny Gantz. In fact, Netanyahu notified the two men about the upcoming accords only minutes before then-President Donald Trump made his public announcement.

More so, Netanyahu used then-Mossad head Yossi Cohen and also head of the National Security Council Meir Ben Shabbat as his personal emissaries for diplomatic missions, leaving the Foreign Ministry outside sensitive issues. Netanyahu even blocked the appointment of 35 ambassadors and heads of missions abroad, an issue Lapid would have to attend to rapidly.

Lapid arrives to the ministry in a very different context. True, the government he is part of is not expected to advance on the conflict with the Palestinians. Newly appointed Prime Minister Naftali Bennett from the pro-settler Yamina party is unlikely to champion any such initiative. On the other hand, as leader of the largest party within the new coalition, Lapid is expected to have a free hand on many foreign relations files. As long as the Palestinian file is on a slow burner, Bennett is set to focus on internal affairs, leaving the foreign affairs arena for Lapid to handle.

Already at his welcoming ceremony, Lapid made his intentions clear, pledging to repair ties between Israel and the Democrats in the United States. “In the past years, Israel has abandoned its foreign service, abandoned the international arena. And then we woke up one morning to find that our international standing has been weakened. … The management of the relationship with the Democratic Party in the United States was careless and dangerous. The Republicans are important to us, their friendship is important to us, but not only the friendship of the Republican Party. We find ourselves with a Democratic White House, Senate and House, and they are angry. We need to change the way we work with them,” said Lapid.

Referring to ties with the Arab world, Lapid said “great things have happened this past year. We need to continue the development that started with the Abraham Accords, to work to strengthen the peace with the Gulf States, with Egypt and with Jordan. We will work to sign agreements with more countries in the region and beyond. It's a process; it won't happen in a day. But the Foreign Ministry will coordinate those efforts.”

He also pledged to repair the damage caused by Netanyahu to Jerusalem’s ties with Amman, emphasizing that “Jordan is an important strategic ally. King Abdullah is an important regional leader and a strategic ally; we will work with him and strengthen the relationship between our countries.”

Over the past few years, as a self-appointed campaigner for Israeli public diplomacy, Lapid had visited many capitals around the world and made himself a name as a statesman. These efforts should now serve him well in his new job. Yesterday, shortly after the swearing-in of the new government, Secretary of State Anthony Blinken called Lapid to congratulate him. A statement issued by Washington said, “Minister Lapid and Secretary Blinken acknowledged the strong partnership between the United States and Israel, and the Secretary noted that he looked forward to welcoming the Minister to Washington soon as the two governments work to build an even stronger relationship between our countries and our peoples.”

With this warm message, Lapid has already been invited to Washington, and unlike Ashkenazi, he won’t have to wait for Bennett to go anywhere first before he is allowed to travel.