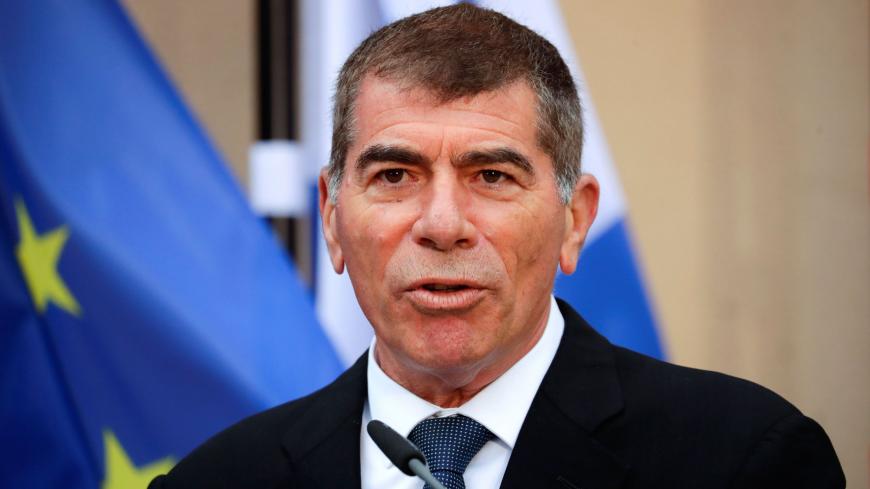 The International Criminal Court (ICC) in The Hague  ruled Feb. 5 that despite Israeli objection it can investigate alleged war crimes perpetrated in the West Bank and the Gaza Strip. Since then, Foreign Minister Gabi Ashkenazi has been busy calling his counterparts across the globe. He is campaigning relentlessly against the ruling.

Shortly after the decision, Ashkenazi published a harsh reaction, stating that it turns the ICC into a political tool of anti-Israeli propaganda. "We call upon all nations that value the international legal system, and object to its political exploitation, to respect the sovereign rights of states not to be subjected to the Court’s jurisdiction. The State of Israel will take every necessary measure to protect its citizens," he added.

A first public opportunity came on Feb. 8, when Greek Foreign Minister Nikos Dendias arrived in Jerusalem, to conclude an agreement with Israel over mutually opening frontiers for people vaccinated against the coronavirus. Diplomatic sources confirmed that the issue of the ICC was discussed at length in the private meeting between the two ministers.

The same evening, Ashkenazi spoke over the phone with Secretary of State Anthony Blinken. Ashkenazi did not need to convince Blinken. Shortly after the ruling, State Department spokesman Ned Price made it clear that the United States objects to it, reminding everyone that Israel is not a state party to the Rome Statute. "We will continue to uphold President Biden's strong commitment to Israel and its security, including opposing actions that seek to target Israel unfairly," tweeted Price.

After the phone call with Blinken, Ashkenazi tweeted, "I thanked him [Blinken] for the administration’s public support of Israel in the face of the outrageous decision by judges of the ICC. I emphasized to the Secretary of State that the tribunal's decision is fundamentally wrong, discriminatory, and that it jeopardizes the rare opportunity to promote peace in our region."

Later that day, Ashkenazi spoke with German Foreign Minister Heiko Maas. "I emphasized the severity with which Israel views the decision of the judges of the International Criminal Court. I made it clear that the decision damages the prospects for promoting peace, and strengthens extremists in the region," tweeted Ashkenazi.

The next day, Ashkenazi continued hammering his anti-ICC message. On his list were Canada, Hungary and Cyprus. Ashkenazi congratulated newly appointed Canadian Foreign Minister Marc Garneau for taking up office, and thanked him for his country’s support on the ICC issue. He then spoke with Hungarian Minister of Foreign Affairs and Trade Peter Szijjarto. "I thanked him [Szijjarto] for Hungary’s position regarding the wrong decision of the judges of the ICC," he tweeted. Last but not least, Ashkenazi spoke with Cypriot Minister of Foreign Affairs Nikos Christodoulides, who is set to travel to Israel on Feb. 14. Ashkenazi will then get yet another public opportunity to bring up the issue.

The phone calls to Haas and Szijjarto paid off. "Our legal view on jurisdiction of the International Criminal Court regarding alleged crimes committed in the Palestine territories remains unchanged: The court has no jurisdiction because of the absence of the element of Palestinian statehood required by international law," said Haas. The Hungarian minister reacted in the same way. “Similar to Israel, Hungary does not agree with this decision. During the legal procedure we already signaled that, according to our position, Palestine does not have criminal jurisdiction over Israeli citizens. We have always supported Israel’s right to defend itself. We believe that peace in the region can only be achieved through negotiations based on mutual respect. The decision of the ICC does not take us closer to this," said Szijjarto.

Feb. 10 was the tour of Australia and the United Kingdom. Ashkenazi thanked Australian Minister of Foreign Affrairs Marise Payne for "Australia's clear and decisive stance that the decision of the ICC is fundamentally wrong." With British Secretary of State for Foreign, Commonwealth and Development Affairs Dominique Raab Ashkenazi "made clear Israel’s total opposition to the decision of the ICC."

Clearly, Ashkenazi started his diplomatic campaign the easy way, by calling Israel’s traditional allies. Germany and Hungary had already expressed last year their objection to the ICC judging Israel. Ashkenazi’s test will be when he contacts those who support the ICC stance. Still, Ashkenazi’s engagement in this campaign is to his credit. The foreign minister had already announced he will not run in the March 23 elections, so he could have taken a more relaxed course of action. Clearly, even on his way out, Ashkenazi does not want an investigation by the ICC opening on his watch.