Visiting Israel despite the coronavirus spike, Hungarian Foreign Minister Peter Szijjarto discussed with his counterpart Gabi Ashkenazi not only bilateral cooperation, but also the Iranian file. 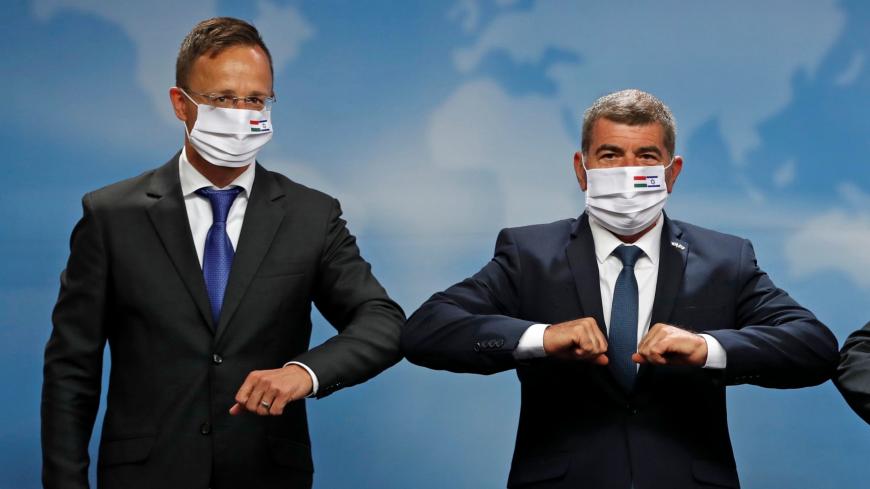 Hungarian Foreign Minister Peter Szijjarto (L) and his Israeli counterpart Gabi Ashkenazi greet each other with an elbow bump during their meeting in Jerusalem, on July 20, 2020. - Photo by RONEN ZVULUN/POOL/AFP via Getty Images

“I am very happy to host my colleague and close friend of Israel, Hungarian Foreign Minister Peter Szijjarto,’’ was how Foreign Minister Gabi Ashkenazi greeted his Hungarian counterpart after he arrived July 20 for a half-day visit to Israel. Szijjarto met both Ashkenazi and Prime Minister Benjamin Netanyahu.

Over the past few years, Netanyahu has nurtured a strong diplomatic alliance with Hungarian Prime Minister Viktor Orban. Netanyahu seems to embrace the nationalist and Euroskeptic approaches openly espoused by Orban. For Israel’s prime minister, the European Union is divided into two camps: those supporting his annexation policies and those who reject them. Orban belongs to the first group, together with some other EU members, mostly from central Europe.

Indeed, upon arrival to Jerusalem, the minister made a point of stating that his country was the one to veto European Union condemnation of President Donald Trump’s peace plan. Szijjarto said that from his point of view, it was worth trying Trump’s plan, rather than doing nothing at all.

“All of the plans put forward so far have failed. If you look at the Trump plan, we do believe it has the most hope to be a basis of successful negotiations. That’s why we have vetoed the EU statement condemning the plan when it was published,” said Szijjarto.

Over the past few months, Hungary, together with the Czech Republic and Austria, consistently blocked attempts by other EU members (mostly France, Sweden and Ireland) to consider or plan sanctions against Israel if and when it adopts Netanyahu’s annexation plan. Szijjarto has been personally engaged in these efforts, earning him the gratitude of Netanyahu and his associates.

Asked about the annexation plan on July 20, the minister said, “Let’s wait until Israel makes a decision. Judging Israel on something that has not been done yet, on which there has been no decision made yet, doesn’t make sense. It’s very counterproductive.”

The most intriguing part of Szijjarto’s visit was the talks he had with both Netanyahu and Ashkenazi over the Iranian file — an issue on which the Israeli prime minister and his foreign minister actually see eye to eye. Ashkenazi’s military background as chief of the Israeli army is an important part of this. Hungary serves as a board member of the International Atomic Energy Agency, and Israeli officials have hopes that Hungary could act on their behalf.

‘’I expressed our concern to the Hungarian Foreign Minister about Iran's incessant violations of its nuclear commitments. In our view, the solution to these violations is complete renunciation of the nuclear agreement, and it is our expectation that the Hungarian government will support this policy,” Ashkenazi said. A statement published by Netanyahu’s office right after their meeting said simply that the two men “discussed regional issues, including the threat Iran poses to the Middle East and the entire world.’’