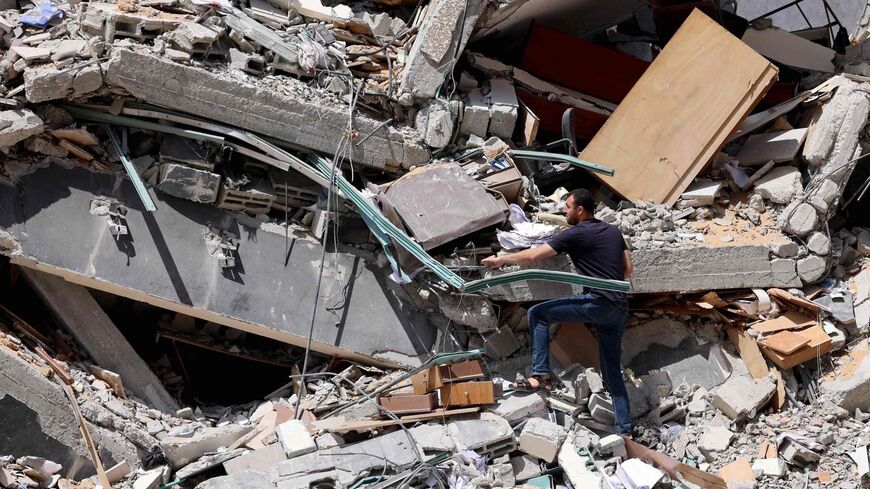 A Palestinian man sifts through the ruins of the al-Jalaa tower, which housed the offices of the news agency the Associated Press and the Aljazeera English channel, destroyed by Israeli strikes during the recent military confrontations between Hamas and Israel, in Gaza City, on May 23, 2021. - EMMANUEL DUNAND/AFP via Getty Images

Israel’s Ambassador to the United Nations Gilad Erdan visited the Associated Press’ headquarters in New York on Monday night and claimed that Hamas was using the al-Jalaa tower in Gaza for electronic warfare to interfere with Israel’s Iron Dome missile defenses.

Israel’s air force bombed the tower, which also housed the local bureaus of AP and Al Jazeera in addition to residential properties, during last month’s conflict with Palestinian militants in the Gaza Strip.

The bombing drew a storm of international criticism, but Israeli officials have insisted Hamas operatives were using the tower for military operations. The Israel Defense Forces warned occupants of the tower, including journalists, to evacuate one hour prior to the strike on May 15.

The AP issued a statement on Tuesday calling the discussions with Erdan “positive and constructive,” but said the agency has not seen any evidence to support the allegation.

“Israeli authorities maintain that the building housing our bureau was destroyed because of a Hamas presence that posed an urgent threat. We have yet to receive evidence to support these claims,” the statement read.

Israeli intelligence on Hamas’ activities in the building was shared with top Pentagon officials, Israeli officials say, but the Defense Department has refused to comment on the intelligence or even confirm having received it.

Erdan also toned down the rhetoric on Monday, saying the Israeli government does not think AP personnel “were aware of the Hamas activities in the building because it was a secret Hamas unit.”

Erdan also said his government will assist in rebuilding AP offices in Gaza.

No one was killed in the airstrike, but more than 250 Palestinians died in the 11-day conflict that began when Hamas and the Palestinian Islamic Jihad launched rockets into Israel in response to clashes in Jerusalem related to an attempt by Israelis to evict Palestinian families from their homes.

At least 12 Israelis were killed as a result of the thousands of rockets launched by the Palestinian militants. Some 90% of the projectiles that reached Israeli skies were shot down by the Iron Dome system, the IDF has said.

The US government is working to replenish munitions supplies for the Iron Dome.

On Tuesday Pentagon Press Secretary John Kirby said the Defense Department is still determining how to fund a requested $1 billion arms transfer presented by Gantz during his visit to Washington last week.

The Israeli bombings have left some 72,000 Gazans displaced, according to the United Nations. The United States has pledged to help lead an international effort to rebuild Gaza and plans to reestablish ties with the Palestinian Authority and direct Gaza aid through the body so as to marginalize the Hamas militant group.