During the 11-day conflict with Hamas, Israeli airstrikes destroyed five high-rise towers in Gaza City that the Israeli military said were used by the militants. 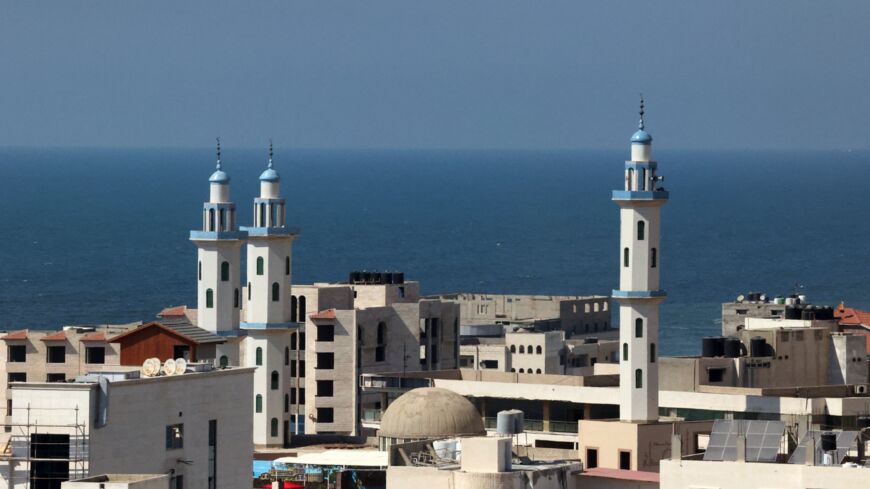 A picture shows Gaza City and its Mediterranean Sea coastline, on July 27, 2021. Human Rights Watch said today that both Israel and Gaza's Islamist rulers, Hamas, probably committed war crimes during their latest war in May. The 11-day conflict saw Hamas and other Palestinian armed groups in Gaza fire thousands of rockets at Israel, which retaliated with hundreds of deadly airstrikes. - SAID KHATIB/AFP via Getty Images

Between May 11-15, strikes hit the Hanadi, al-Jawhara, al-Shorouk and al-Jalaa towers in Gaza City’s densely populated neighborhood of al-Rimal. The Israeli military issued warnings beforehand, giving each of the buildings’ tenants time to evacuate.

There were no casualties from the air raids, but the bombing flattened three of the towers and severely damaged the fourth, which is slated to be demolished. The buildings housed a number of local and international media outlets, including the newsrooms of Al Jazeera and The Associated Press.

“The apparently unlawful Israeli strikes on four high-rise towers in Gaza City caused serious, lasting harm for countless Palestinians who lived, worked, shopped, or benefitted from businesses based there,” said Richard Weir, a crisis and conflict researcher at HRW.

“The Israeli military should publicly produce the evidence that it says it relied on to carry out these attacks,” Weir said.

Israel said the buildings were being used by the militant group Hamas, which governs the coastal Palestinian enclave. In a report published Monday, HRW found no evidence that militants “had a current or long-term presence” in any of the four buildings when Israel attacked them. The New York-based organization conducted interviews with 18 witnesses and victims of the airstrikes, as well as reviewed photos and video footage of the attacks.

“Even if there were such a presence, the attacks appeared to cause foreseeably disproportionate harm to civilian property,” the report said.

The fighting between the two sides —  the worst since the 50-day war in 2014 — killed more than 260 people in Gaza, including 66 children, and 12 civilians in Israel, the report said.

According to authorities in Gaza, Israel's aerial attacks left 2,400 housing units uninhabitable and damaged a further 50,000 units. Some 2,000 industrial, trade, and service facilities were destroyed or partially damaged, officials said.

An HRW report earlier this month also said rocket and mortar attacks from Hamas and other Palestinian armed groups during the May fighting violated the laws of war and amount to war crimes. In addition to causing 12 deaths in Israel, some of the 4,360 rockets indiscriminately launched toward Israel fell short and killed and injured Gazans.