Israeli airstrikes have reportedly destroyed the offices of more than a dozen news outlets in Gaza. 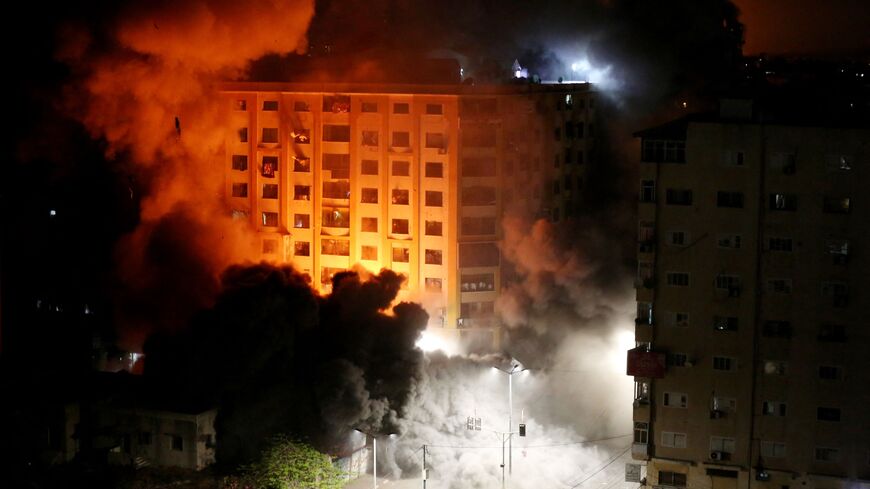 Smoke billows on early May 12, 2021, from the Al-Jawhara Tower in Gaza City, which was targeted by Israeli airstrikes. The tower housed a number of news organizations. Israel said the building was targeted because it housed Hamas offices, including “the military wing’s Public Relations department.” - ASHRAF AMRA/AFP via Getty Images

The Committee to Protect Journalists, a global press freedom watchdog, has called on Israel to protect reporters covering the unrest across Israel and the Palestinian territories, as well as refrain from targeting buildings that house media outlets.

In the West Bank on Wednesday, Israeli forces arrested Hazem Naser, a Palestinian cameraman for Al-Ghad, according to a report by the Amman-based broadcaster. On Thursday, Turkish state-owned Anadolu Agency reported that two of its Palestinian journalists were injured in an Israeli strike in Gaza.

Israel is continuing its aerial attacks targeting the militant group Hamas, which governs the Gaza Strip and has launched volleys of rockets into Israel. The fighting between the two sides is the worst since the 50-day war in 2014.

At least 122 people in Gaza, including 31 children, have died in Israel’s five-day operation, Palestinian officials said. The death toll on the Israeli side has risen to nine, including a 6-year-old boy who was killed when a rocket struck a residential building in the southern Israeli city of Sderot.

On Tuesday, Israeli strikes destroyed the 12-story Al-Jawhara building in Gaza that housed nine newsrooms, including that of the London-based Qatari channel Al-Araby TV, the news site Al-Bawaba 24, the pro-Hamas outlet Sabq24 News Agency and the pro-Fatah broadcaster Al-Kofiya TV. The Qatari television channel Al Jazeera also reported that its nearby office was damaged in the bombing.

The next day, a strike flattened the 14-story Al-Shorouk tower, which the Committee to Protest Journalists said housed several Hamas-linked outlets and the Palestinian Authority-affiliated newspaper Al-Hayat al-Jadida.

“It is utterly unacceptable for Israel to bomb and destroy the offices of media outlets and endanger the lives of journalists, especially since Israeli authorities know where those media outlets are housed,” Delgado said.

In a statement provided to the committee, the Israeli military said it struck the Al-Jawhara building because it housed Hamas offices, including “the military wing’s Public Relations department.” The Al-Shorouk building was bombed because it contained Hamas military intelligence offices and “infrastructure used by the terror organizations to communicate tactical-military information,” the military said.

According to news reports, residents were warned to evacuate the Al-Jawhara building, and Israeli planes fired two warning shots before leveling the Al-Shorouk building.