Journalists in Gaza, including many women reporters, remained dedicated to their work documenting violations against civilians despite the dangers and difficulties they faced. 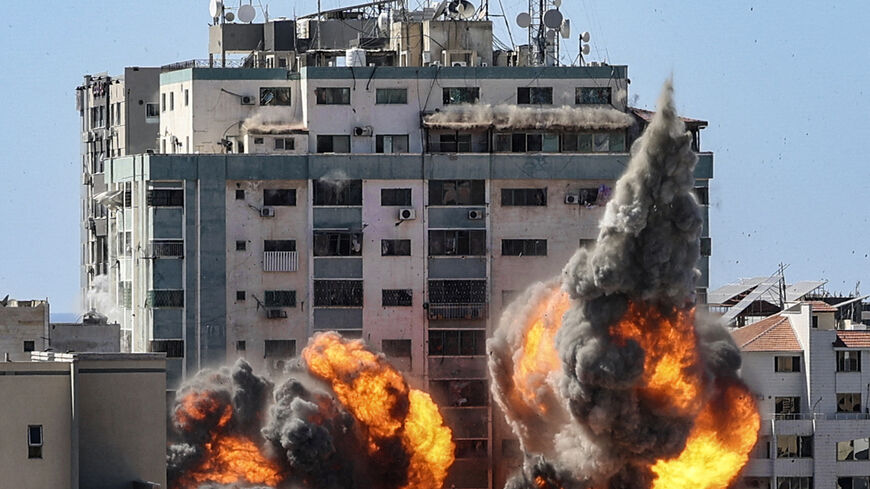 A ball of fire erupts from the Jala Tower as it is destroyed in an Israeli airstrike in Gaza City on May 15, 2021. The 13-floor Jala Tower housed the Qatar-based Al-Jazeera news and the Associated Press news agency. - MAHMUD HAMS/AFP via Getty Images

During the fourth war on Gaza, female Palestinian journalists left their mark on the images and reports from the field. The Israeli shelling threatened both their homes and the media institutions they worked for.

After Israeli struck the offices of about 20 media organizations in the Gaza Strip, Reporters Without Borders called on the International Criminal Court to investigate the destruction of press offices and determine whether the shelling amounted to a war crime.

Amid the destruction of media institutions in Gaza, some Israeli news outlets admitted that the recent Gaza escalation tarnished Israel's image.

Samar Abu el-Ouf, a New York Times photographer based in Gaza, described to Al-Monitor her toughest moments during the latest round of fighting. “I froze when I received a call from my youngest daughter, who told me that the upper floor of our house was being roof-knocked as I was photographing the morgue full of victims at al-Shifa Hospital in Gaza City. I did not know what to do. Journalists gathered around me and brought a car to take me home.”

“I was afraid for a moment that I would find my children under the rubble in a recurrence of the massacre of my relatives on the next street in Al-Wehda neighborhood in Gaza City. But luck was on my side, as I found my kids in the street. But I had to evacuate the house for several days until the cease-fire was announced,” she added.

Regarding the dangers she faces working in a war zone, Ouf said that she has always taken safety measures like wearing a helmet and flak jacket and exercising extreme caution when approaching bombing sites. She said the fighting, however, “impeded my access to the border areas that were subject to intense bombing and my ability to document the violations against civilians,” she said.

She said that the bombing of the journalism centers, especially Al-Galaa Tower, where the Associated Press and Al-Jazeera offices are located, proves that Israel has no red lines or consideration for safety. But the destruction led journalists to cooperate and share work spaces, she added.

Ouf believes that war coverage needs an army of photographers to show the realities of Gaza and document violations against civilians.

Kahil added to Al-Monitor, “I established the website with my colleague, Umniah Abu Al-Khair, after I was fired from my previous job where I had worked for 16 years due to the COVID-19 pandemic. Now the tower bombing has made us feel unsafe again.”

Kahil said that she and her team had to work from cafes due to the bombing of the agency’s headquarters and damage to the electricity grid that left their homes without power.

She added in an interview with Al-Monitor, “On one occasion, while I was writing a story about the killing of 42 people, including 10 children and 12 women, in a single Israeli raid on al-Wehda Street in central Gaza City on May 16, I burst into tears that soaked my keyboard. The stories of three children and girls — Reham Al-Kulk, Suzy Ashkantana and Shaima Abu Al-Auf — are still stuck in my mind and I'm still thinking, ‘None of this had to happen.’”

Nour Harazin, a correspondent for the CGTN network, said of her experience, “Many times I felt insecure, especially after the targeting of many press institutions.”

Asked about juggling her journalistic duties and her duties as a mother, she told Al-Monitor, “I have been in a constant struggle to balance between my work and my home. I am the mother of two three-year-olds and my father’s only daughter. Therefore, it is my responsibility to take care of the children as well as my father.”

Harazin concluded, “What motivated me to move forward and accept the dangerous work conditions was my sense of journalistic responsibility toward what was happening on the ground, and also because of the lack of English news coverage in the Gaza Strip. It was my duty to convey the picture to the non-Arabic-speaking international community about what is happening in the Gaza Strip.”