The Israeli shelling of the Gaza Strip has destroyed hundreds of houses and buildings, leaving many to stuck under rubble that rescuers are ill-equipped to move. 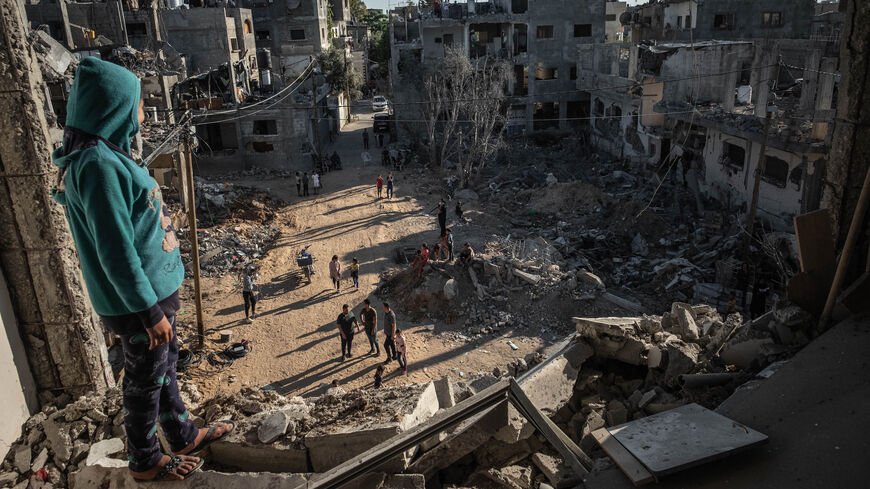 Palestinians return to the rubble of their destroyed homes on May 24, 2021, in Beit Hanoun, Gaza. - Fatima Shbair/Getty Images

GAZA CITY, Gaza Strip — Riad Eshkuntana, 42, recalled exactly where he was at 1 a.m. May 15 in his rented apartment on the third floor in the Abu al-Auf building on Al-Wehda Street in central Gaza City.

He was standing on the new red rug he'd bought along with other Ramadan ornaments to make the apartment festive for his children, three girls and two boys, as well as his wife during the Muslim holy month.

At that moment, Israeli jets bombed Eshkuntana’s residential building without notifying civilians to clear the area. The jets pounded the coastal enclave with shells for 11 days as part of the Israeli military campaign against the Gaza Strip called Guardians of the Walls.

In a blink of an eye, the father of five found himself trapped under a cement wall. He laid there in the rubble, with his right hand stuck in the wreckage. The pain was so excruciating that he thought his hand was severed.

At first, Eshkuntana heard his two sons calling for him, but they soon fell silent. His two sons, one of his daughters and his wife were all dead.

“I felt dead and buried,” Eshkuntana told Al-Monitor. As he laid stuck in the wreckage, he said he “came to terms with the idea that I was going to die. That’s it.”

Six hours later he heard paramedics and other volunteers searching the area. As he was removed from the rubble, Eshkuntana managed to give the two-finger victory sign. He was rushed to the Dar al-Shifa Hospital for treatment.

Four hours after he got to the hospital, his six-year-old daughter, the only other family member to survive, arrived there too after having spent 10 hours under the rubble. “She was in shock, especially when she saw my face covered in blood,” he said.

Israel's relentless bombing finally came to a halt on May 21 as part of an Egyptian-sponsored cease-fire agreement. It had killed 232 Palestinians, including 65 children, 39 women and 17 elderly people.

According to the United Nations estimates, the Israeli bombing campaign has destroyed 260 buildings, and damaged 53 schools, six hospitals and 11 other health care facilities. Gazans whose houses were destroyed are now catching their breath and seeking shelter as they wait for the aid need to reconstruct the enclave.

Khamis Abu al-Kheir, a 20-year-old volunteer with the Palestinian Civil Defense, related his harrowing experience in rescuing a man from the rubble of al-Wehda Street.

On the evening of May 15, Abu al-Kheir's team received a distress call from Gaza City and went to the Abu al-Auf building. As he searched for survivors in the rubble, he kept hearing a man moaning. He followed the voice despite his colleagues warnings that it was too dangerous to enter the wreckage.

“I spent seven hours removing debris to get to the trapped man. There was barely enough air in this small opening in the wreckage. But I refused to let this man die. He was stuck between two cement ceilings that could crumble over him at any moment,” Abu al-Kheir told Al-Monitor.

According to the Gaza government's statistics, some 1,447 housing units were completely demolished in the Israeli shelling and 13,000 more were damaged. The bombing also damaged press and charity offices.

Raed al-Dahshan, the director of the Civil Defense in Gaza, told Al-Monitor that his teams of approximately 800 men are working around the clock in the besieged enclaves’ five governorates. They sometimes have use hammers to break the wreckage up by hand to get to survivors. “We have even slept under fire trucks,” he said.

Dahshan laments the Civil Defense's lack of supplies and other challenges that stem from the Israeli blockade in place for the last 15 years.

He explained that his teams are in dire need of excavators, concrete crushers, cranes and other heavy machinery.

“We do not have the heavy equipment we need nor transportation, which delayed us getting to those trapped under rubble, leaving many to die. Sometimes we can hear the survivors but we can’t get to them,” Dahshan said.

“According to international law and the Fourth Geneva Convention, the Civil Defense, which is a humanitarian service apparatus, has the right to be adequately equipped and to work in safety. Israel prevents that,” he said.