An Egyptian archaeological mission is preparing to launch an excavation project in Saudi Arabia after several discoveries showed that ancient Egyptian King Ramses III had a presence in the Arabian Peninsula. 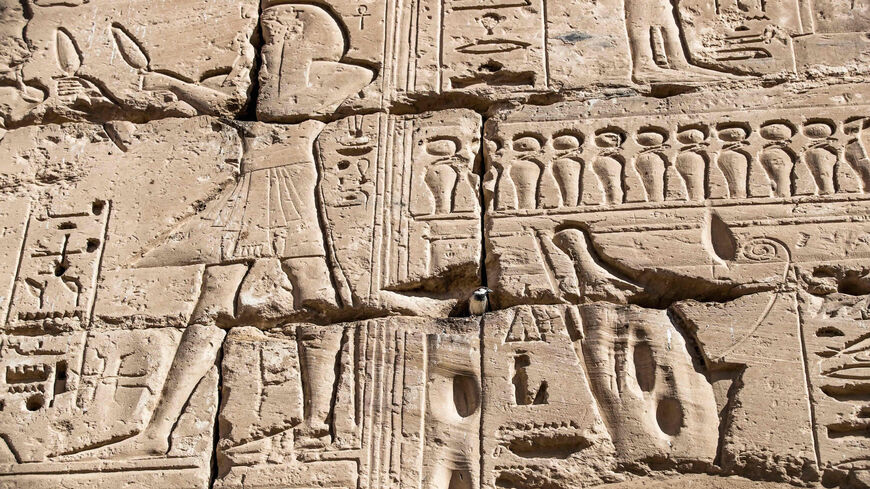 A sparrow perches in a recess along a wall adorned with reliefs at the Mortuary Temple of the 20th dynasty Pharaoh Ramses III at Medinet Habu, on the west bank of the Nile outside Luxor, Egypt, April 10, 2021. - Khaled Desouki/AFP via Getty Images

CAIRO — Egypt's former Minister of State for Antiquities Affairs and prominent Egyptologist Zahi Hawass said in a press statement May 27 that he discussed in a meeting with the CEO of the Heritage Commission of the Saudi Ministry of Culture, Jasir al-Harbash, the mechanisms needed to kickstart the excavation project at the site of King Ramses III, one of the kings of the 20th Dynasty of ancient Egypt, in Saudi Arabia in November.

Once the trade route is unveiled, he continued, a lot of information regarding its use during historical eras will be coming our way.

He pointed out that there are many other regions found on the trade route that linked the two countries, and excavations will be carried out in these regions to find new evidence of Egyptian kings who sent missions to Saudi Arabia more than 3,000 years ago.

An important group of scarabs found in Saudi Arabia came from Egypt, he said.

On Nov. 7, 2010, the Saudi Supreme Commission for Tourism and Antiquities (SCTA) announced the discovery of what it described as the first hieroglyphic inscription in the Arabian Peninsula dating back to the 12th century B.C., an inscription found on a rock in the Tayma region of northern Saudi Arabia. The inscription includes a cartouche (royal signature) of King Ramses III, the last king of Ramesses (the kings of that period were all called Ramses), who ruled Egypt between 1192 and 1160 B.C., which confirms the existence of a commercial relationship between the two countries at that time.

The commission said that Saudi archaeologists conducted a field and desk research that led them to conclude that there is a direct trade route linking the Nile Valley with Tayma in northwestern Saudi Arabia that was used during the reign of Pharaoh Ramses III. Egyptian convoys would travel by this road to buy valuable goods in Tayma, which was famous for its incense, copper, gold and silver.

Ali bin Ibrahim al-Ghabban, vice president for Antiquities and Museums at the SCTA, said back then that the discovery of this road will be a turning point as far as studies about the roots of civilizational relations between Egypt and the Arabian Peninsula are concerned.

He expected more cartouches of Ramses III to be found on the trade route, or cartouches of other kings of Egypt in Hasma — a sand desert in the Tabuk region of northern Saudi Arabia, stretching over 400 kilometers (248 miles) between Tayma and the Aqaba Gulf on the Red Sea. The area is characterized by rocky facades suitable for writing and engraving.

Saudi Arabia, one of the countries of the Arabian Peninsula, is located in Asia to the east of the Arab Republic of Egypt, and the two countries are separated by the Red Sea.

Asked about the details of the excavation project in Saudi Arabia, Hawass told Al-Monitor over the phone that this is the first time that an Egyptian mission digs for Pharaonic antiquities in Saudi Arabia, as the missions that were previously deployed there were mainly foreign. He pointed out that the excavations will take place at two sites, one of them near the coast and another near the area where the cartouche belonging to Ramses III was found — the Tayma region.

Asked about his expectations of what the excavation will lead to, Hawass said that there will be no expectations regarding the shape or nature of the antiquities that the mission is looking for before the excavation begins, but the mission is trying to find out more about the existence of a commercial relationship between Egypt and Saudi Arabia in the era of the modern Egyptian state dating back 3,000 years.

The mission, he added, set a period of three months for the excavations before the announcement of any discoveries.

Tayma is considered one of the most important archaeological sites in Saudi Arabia and the Arabian Peninsula in general, and includes antiquities dating back more than 85,000 years. It was traditionally a commercial and economic hub and a melting pot for the ancient trade routes.

According to a report published by the Saudi Press Agency on Oct. 7, 2018, many civilizations settled in the Tayma region.

Hussein Abdel Basir, director of the Antiquities Museum at Bibliotheca Alexandrina, told Al-Monitor over the phone that the Arabian Peninsula, including Saudi Arabia, has a rich civilization, and there were lines of communication between this region and Egypt in the past, as evidenced by the inscriptions that belonged to King Ramses III. Also, there was a relationship between Egypt and the Qataban region in Yemen (in the Arabian Peninsula) during the reign of King Thutmose III, who belonged to the 18th Dynasty, he said.

Asked about Tayma particularly, Abdel Basir said that it served as the seat of the last Babylonian king, Nabonidus, who ruled during the period 556-539 B.C., as mentioned by the Arabs in the Assyrian texts in the seventh century B.C.

He noted that the presence of an Egyptian mission excavating antiquities there is pivotal, as it enhances cooperation between Egypt and Saudi Arabia in the archaeological field.

“I believe that the mission’s goal is not to prove the existence of a relationship between the two countries per se but to focus on the value of what will result from this drilling irrespective of its nature,” he concluded.