The Egyptian Ministry of Tourism and Antiquities recently announced the discovery of five water wells, a storehouse and a copper smelting workshop dating back to the Pharaonic era in the Tel el-Kidwa area, north of Sinai. 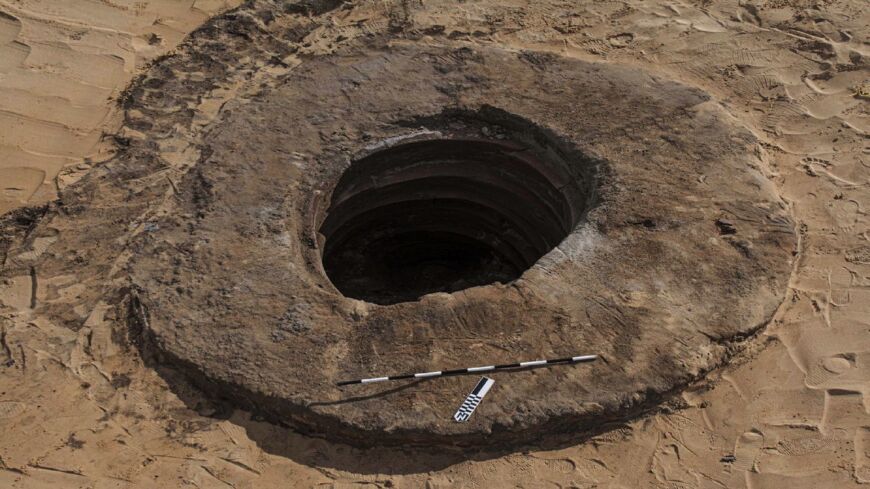 CAIRO — The Egyptian Ministry of Tourism and Antiquities announced Feb. 28 the discovery of five ancient water wells, a workshop for smelting copper and a storage center, all of which date back to the Pharaonic era. The discoveries were made on the ancient Horus Military Road in the Tel el-Kidwa area in the north of the Sinai Peninsula.

On the same day, Secretary-General of the Supreme Council of Antiquities Mostafa Waziri said in a statement, “This is the first time that water wells from Pharaonic times have been discovered in that area. Scientific evidence affirms that these wells first appeared in the inscriptions engraved on the walls of the Karnak Temple (in Luxor governorate in the south of Egypt) during the era of King Seti I.”

According to Waziri, “The inscriptions of King Seti I at the Karnak Temple are the main sources that indicate the presence of a series of military fortresses and water wells along the road (the ancient Horus Military Road). One of the inscriptions depicted a water well in front of each fortress of the Horus Road. During the era of the New Kingdom, the ancient Egyptians gave specific names to each of these fortresses and water wells of the ancient Horus Road.”

Waziri added that “there are five discovered wells located outside the walls of the Tel el-Kidwa fortress, in an area characterized by yellow sand.”

The Horus Military Road is one of the oldest roads in Sinai, linking Egypt and Palestine, and stretching over a length of 220 kilometers (136 miles). It was known in Egyptian Pharaonic texts since the era of the Old Kingdom as the “Horus Road,” the statement said.

Director-General of Sinai Antiquities and member of the archaeological mission that made the discovery Hisham Hussein told Al-Monitor, “The evidence we have indicates that four out of the five wells discovered were destroyed and filled with sand so that invaders would not use them during the Persian conquest of ancient Egypt.”

“The reason behind the destruction was clear as there is a similar case in the San el-Hagar area in western Egypt, where the English mission that worked there discovered destroyed wells dating back to the end of the 26th Dynasty and the beginning of the 27th Dynasty (the date of the discovery is not mentioned), during the Persian invasion of Egypt,” he said.

“During that era, Persians also invaded Tel el-Kidwa area in Sinai located on the eastern borders of Egypt. The military fortress there was destroyed. We believe the ancient Egyptians were aware of the invasion before it took place and thus destroyed the wells so that the invaders would not benefit from them and to cut off their water supply,” Hussein explained.

He continued, “Those who dug these wells in the Pharaonic era put 13 pottery rings on top of each other inside to ensure the cohesion of the well and prevent its collapse. Each of the wells has three side openings that help in descending and ascending from the well.”

He said that “Tel el-Kidwa was one of the most important Egyptian military sites during the 26th Dynasty, and the archaeological mission discovered the remains of two castles at the site, one of which dates back to the era of King Psamtik I.”

Asked why the fifth well was not destroyed, Hussein said, “We don't know why, and the Egyptian archaeological mission is working to solve this mystery.”

Regarding the discovery, Nadia Khader, head of the Central Department of Antiquities of Lower Egypt, said in a statement on Feb. 28, “The excavations resulted in the discovery of a warehouse about 12 meters long and four meters wide, where several pots lay on top of each other for use as water drains.”

The mission, Khader continued, also unearthed “remains of kilns from the middle of the Saite period, likely to have been used for smelting copper ore, as parts of copper alloy parts on circular shapes were found, in addition to parts of pottery bellows used in the smelting process.”

Asked about the presence of copper smelting caves in this area, Hussein said, “Copper was used in the manufacture of weapons at the time, as Egypt was subjected (at the end of the 26th Dynasty) to threats of invasion and wars (on the part of the Persians) amid turmoil in the Near East region. A lot of preparations were made at this place, which was used in the manufacture of war tools.”

He explained that the latest discovery “proves several things, including that pottery manufacturing in wells are ancient Egyptian ideas, not ideas from the Near East. Such discoveries also prove that Sinai is an Egyptian land and the first bulwark against any Egyptian invasion.”

Hussein Abdel Basir, director of the Antiquities Museum at Bibliotheca Alexandrina, pointed to “the importance of the archaeological area of ​​Sinai, which is home to many antiquities in the south and north and is considered the eastern gate of Egypt. It is also a very strategic part that is inseparable from Egyptian lands.”

Abdel Basir told Al-Monitor, “The recent discoveries (the five wells) confirm the importance of the Horus Military Road for archaeologists, as it was the path taken by the Egyptian forces fighting in the ancient Near East, especially during the era of the modern state, which started with King Ahmose I, continued with Thutmose I and III, until the great military conquests under Seti I and Ramses II.”

Hussein said, “The land of Sinai has not revealed all of its archaeological secrets yet, and there are new discoveries in Sinai that will be shortly announced.”

He did not give further details.