Cairo has launched an initiative to rebuild Gaza, coinciding with cease-fire efforts, through which Egypt seeks to extend its influence over the region and achieve political and economic gains. 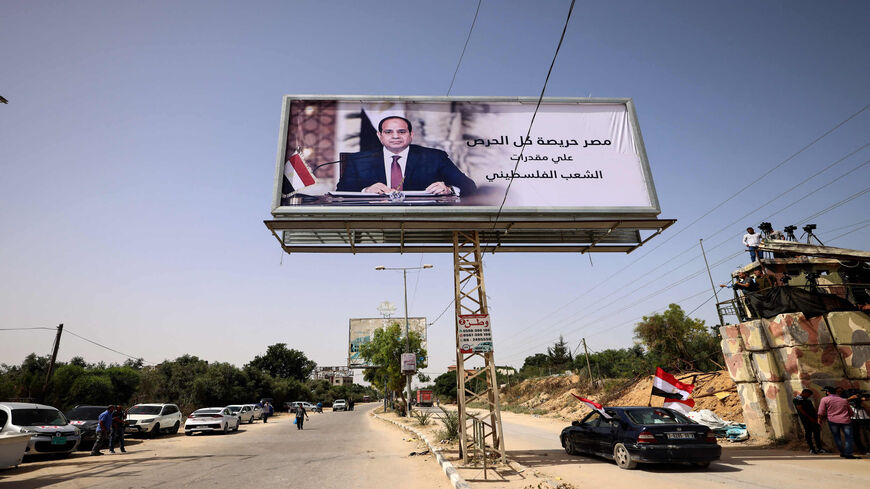 Palestinians wave Egyptian flags while sitting in a vehicle parked beneath a giant billboard depicting Egyptian President Abdel Fattah al-Sisi with a quote from him reading in Arabic "Egypt is extremely keen for all the rights of the Palestinian people," as they wait to receive the incoming Egyptian intelligence convoy entering the Gaza Strip on the Palestinian side of Erez border crossing with Israel near Beit Hanoun, May 31, 2021. - Mohammed Abed/AFP via Getty Images

During a tripartite summit with the French president and the Jordanian king in Paris May 18, Egyptian President Abdel Fattah al-Sisi announced the allocation of $500 million, through specialized Egyptian companies, for the reconstruction of the Gaza Strip following an 11-day Israeli aggression.

The Egyptian initiative coincided with the success of the Egyptian efforts in brokering a cease-fire between the Palestinian factions and Israel in the Gaza Strip, which was welcomed by many world leaders. During a phone call with his Egyptian counterpart May 24, US President Joe Biden stressed the US support for the Egyptian mediation to achieve the truce and support the reconstruction of Gaza, noting his desire to continue consultations and coordination with Sisi regarding the Palestinian cause.

Speaking to Al-Monitor, Egyptian member of parliament Mustafa Bakri praised the Egyptian efforts to reach a cease-fire and achieve truce between Israel and the Palestinian factions, stressing that Egypt's position on the situation in Gaza and the Israeli aggression against it reflects the reality of its pivotal role in the region, which is keen to achieve stability and maintain Arab and Egyptian national security.

Bakri said that Sisi's initiative to contribute to the reconstruction of Gaza aims to support the cease-fire decision and mobilize the international community to find a comprehensive and just peace in the region leading to the establishment of a Palestinian state with Jerusalem as its capital, in addition to stopping Israeli settlement expansion.

He noted that Egypt is a fundamental party in the equation of peace and stability in the region, as it is keen to protect national security in the region in general, and in Egypt in particular, stressing that Sisi's belief in Egypt's national and Arab role is the engine to end any crisis.

Bakri pointed out that Egypt's role will develop in the coming period, especially in light of Sisi’s contacts with world leaders to end the conflict and solve the Palestinian issue, stressing that Egypt has vigorously returned to assume its role in the region.

Salah Halima, deputy chairman of the Egyptian Council for African Affairs, told Al-Monitor that the Egyptian initiative related to the Gaza reconstruction process achieved positive results, as some world leaders accepted it and expressed their desire to participate in the reconstruction process, which confirms Egypt's role in the region and the world.

He stressed that the Egyptian initiative for the reconstruction of Gaza will attract the international community, whether to participate in the peace process or development and construction in the Gaza Strip. He added that the contacts between the Egyptian and US presidents and the subsequent visit of US Secretary of State Antony Blinken to Cairo is proof that the relations between the two countries are improving, and is evidence of the extent of cooperation and joint coordination between them on regional issues.

Speaking about the economic gains of the reconstruction initiative, Yaman al-Hamaki, an economics professor at Ain Shams University in Cairo, told Al-Monitor that the Egyptian economy was heavily affected by the coronavirus pandemic, just as much as any other country.

She said that Egypt achieved a growth rate of about 2% in the current fiscal year (July 1, 2020, to June 30, 2021), compared to a 5.6% growth in the previous fiscal year. She added that Egypt's opportunities for development have been negatively affected, which threatens to increase the unemployment rate.

Hamaki stressed that reviving the Egyptian economy has become a priority at present, noting that Egypt's participation in the reconstruction of Gaza will positively affect the Egyptian economy, be it with its contracting companies that have gained sufficient experience in development projects in Egypt or with its companies that specialize in building materials, such as iron and cement, which will have an opportunity to increase their exports.

She noted that the Gaza reconstruction will help provide job opportunities for Egyptian workers alongside the Palestinians, not to mention the chance to exchange professional experiences.

On May 21, Alaa al-Zuhairi, head of the Egyptian Insurance Federation, told the press that the federation was ready to provide the necessary insurance coverage to contracting companies that will participate in the reconstruction of the Gaza Strip for the success of the reconstruction initiative.