President Abdel Fattah al-Sisi attended China's second forum on its Belt and Road Initiative with the aim of boosting trade and promoting investments. 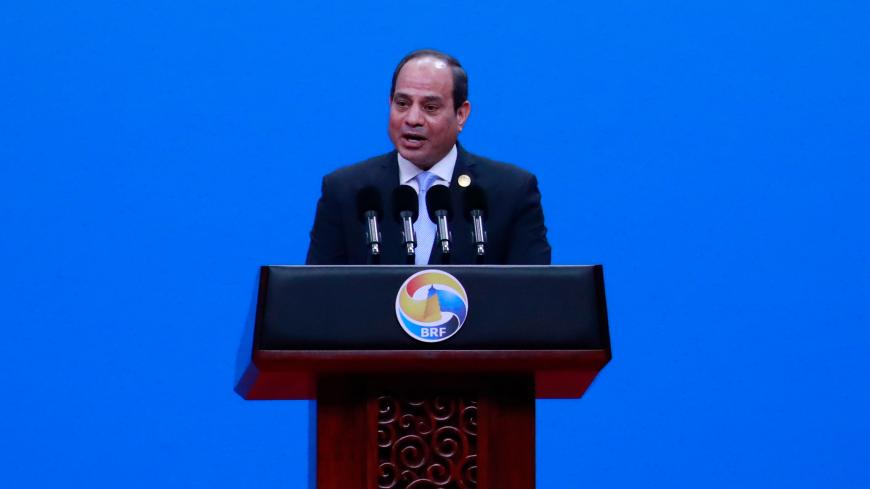 Egyptian President Abdel Fattah al-Sisi delivers his speech for the opening ceremony of the Belt and Road Forum for International Cooperation, April 26, 2019 in Beijing, China. - How Hwee Young-Pool/Getty Images

CAIRO — Egyptian President Abdel Fattah al-Sisi wrapped up his visit to Beijing this week, returning home with new partnership agreements that include a contract to jointly manufacture electric cars.

Sisi attended China's second Belt and Road Forum for International Cooperation, along with 5,000 delegates and 37 other heads of state. Before his visit ended April 28, he met with several top leaders, including his host President Xi Jinping and Russian President Vladimir Putin.

China launched the ambitious Belt and Road Initiative (BRI) in 2013 to establish a road network connecting Asia, Africa and Europe, based on the 19th century Silk Road concept that linked China to the world. BRI aims to expand world trade by building roads, ports and other facilities in several countries in Asia, Africa and Europe.

At the opening session of the forum April 26, Sisi delivered a speech stressing Egypt’s strategic partnership with China.

“The [BRI] initiative covers vital sectors and areas of priority for us, in light of Egypt Vision 2030, such as comprehensive development, mainly in energy, infrastructure, information technology and transportation," Sisi said. “Egypt’s current leadership of the African Union [AU] has an important dimension for the BRI,” given “China’s keenness on coordinating with African states on various issues.”

Sisi's spokesman, Bassam Radi, said in an April 25 statement that Jinping praised Egypt's achievements in the fields of economic development and reform, as well as its accomplishments in security, stability and several major national projects that encouraged Chinese companies to work in Egypt.

The statement followed Sisi and Jinping’s meeting at the Great Hall of the People. Radi noted that the Chinese president expressed his government's support for the development process in Egypt.

On the sidelines of the BRI forum April 27, Egyptian Minister of State for Military Production Mohammed Saeed al-Asar and Minister of Trade and Industry Amro Nassar attended the signing ceremony of an agreement between Egypt's M1A1 Tank Factory (Military Factory 200) and Chinese automaker Foton Motor. The agreement covers joint manufacturing of electric vehicles in Egypt. The agreement also includes joint manufacturing of 2,000 buses in four years, with Egyptian companies providing 45% of the components.

Yemen al-Hamaki, an economics professor at Ain Shams University in Cairo, told Al-Monitor, “Sisi’s visit to China is [significant], given the importance of the BRI for the African continent, especially in light of Egypt’s policy as head of the AU." Sisi aims to "change Africa’s integration into the global economy, by presenting it as a manufacturing continent rather than a source of raw material. This will help to reduce unemployment and poverty rates. The agreement for the joint manufacturing of electric vehicles signed during the forum falls within this scope.”

She went on, “Through the BRI, China is trying to reap the benefits of globalization, which plays a key role in China's prosperity and growth, by injecting huge investments into a number of countries, including in Africa. This would reduce China’s trade costs and boost its [international] trade sector. This would consequently help China regain its international status. Although China’s investments in Africa mainly fall in the former’s best interest, they also benefit the latter, including Egypt, which must tap this opportunity.”

Egypt and China have strong economic relations. A report issued April 25 by Egypt's State Information Service indicated “trade between Egypt and China increased to $13.87 billion in 2018, an increase of 29.3% over the same period of 2017, keeping Beijing the largest trade partner of Egypt and the [top] exporter to Cairo.” The report added, “Chinese imports to Egypt reached $8.7 billion in 2018, an increase of 28%, while Egyptian exports to China reached $1.8 billion for the first time in the history of trade exchange between the two countries.”

Tarek Fahmi, a political science professor at American University in Cairo, told Al-Monitor the political gains from Sisi's participation in the BRI forum are more important than the economic ones.

“Economic gains are fixed and stable, represented in the BRI, which will benefit Egypt, Arab and African countries. They fall within China's activity as an investor toward the countries of the region as a whole, including Egypt," Fahmi said.

“Sisi is strengthening Egypt’s international standing by holding talks with several heads of state on regional issues and conveying Egypt's message on these issues. During the BRI forum, he was speaking in his capacity as head of an Arab country and head of the AU. Sisi is opening up Egypt to countries such as China, Korea, Malaysia and India through a well-studied presidential diplomacy, part of which promotes the Egyptian economy through the promising investment opportunities.”

China is implementing several projects in Egypt, including the construction of a "clean-coal" power plant on the Red Sea coast as well as the construction of the tallest skyscraper in Africa. This is in addition to the Comprehensive Strategic Partnership Agreement signed by Egypt and China in December 2014.

Ghada Ajami, a member of Egypt's parliament and undersecretary of the Foreign Relations Committee, told Al-Monitor that Sisi expressed willingness to overcome any obstacles that might face Chinese companies in Egypt. Sisi's government is keen to boost bilateral economic and trade cooperation, and joint investments, she said.

“By heading the AU, Egypt will reap more benefits from the BRI, by strengthening partnerships with other BRI parties," she said, citing the example of the Cairo-Cape Town road linking North Africa to South Africa with the aim of bolstering trade and investment flows.

China in the Mideast
Infrastructure