Egyptian President Abdel Fattah al-Sisi returned a few days ago from a visit to China during which he participated in the Forum on China-Africa Cooperation in what raised questions about the gains that Egypt will achieve from the visit. 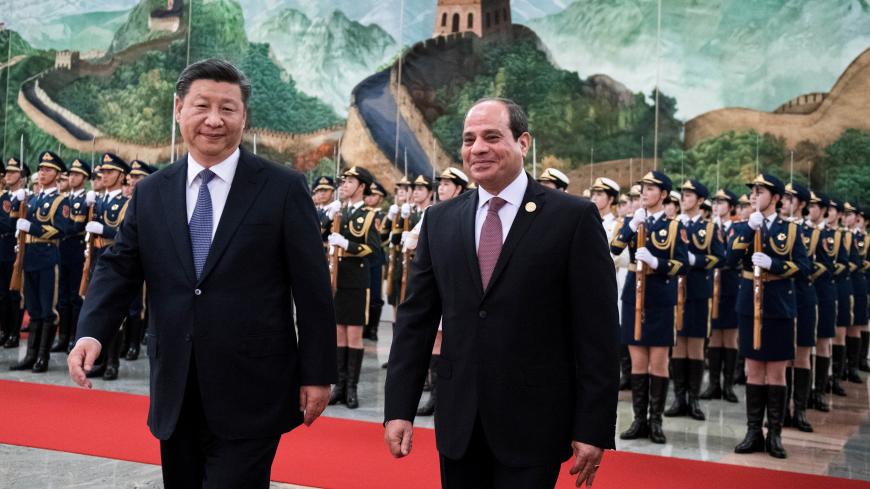 CAIRO — Egyptian President Abdel Fattah al-Sisi returned Sept. 5 from an Asian tour that included China, Uzbekistan and Bahrain and held talks with his Chinese counterpart Xi Jinping, the Chinese prime minister, a number of representatives of Chinese companies and President of Uzbekistan Shavkat Mirziyoyev. On Sept. 3-4, Sisi also participated in the Forum on China-Africa Cooperation.

This is the fifth visit that the Egyptian president pays to China. His first visit was in December 2014, and he then visited China in September 2015, September 2016 and September 2017.

Egypt has a strong relationship with China, as the country turned into Egypt's biggest trade partner in 2014 with a commercial trade value of about $12 billion. In addition, the number of Chinese tourists doubled in one year to more than 120,000 in 2015 and 180,000 in 2016, according to the website of the Egyptian Ministry of Foreign Affairs.

This increase is due to the efforts exerted by Egypt, which include the facilitation of Chinese tourist visas to Egypt and direct flights between a number of Chinese cities and Egypt, according to a statement issued by the Egyptian Embassy in Beijing on June 10, 2015.

Egypt imports cellphones, wireless devices, footwear and ready-made garments from China, while it supplies it with crude oil, marble and fruits.

During his visit Sept. 2 to the headquarters of the Central Party School of the Communist Party of China, Sisi said, “My fifth visit to China reflects the enhanced relations between the two countries. It also comes to confirm the need to ensure greater prospects of cooperation.” Sisi added that the visit aims at enhancing “our bilateral relations in various fields. We need to benefit from the Chinese experience in the fields of technology and industrial development all the while promoting trade and cultural relations.”

In this regard, Medhat El-Sherif, a member of parliament’s Economic Affairs Committee, told Al-Monitor that China is pursuing an unconventional method of managing its international economic and political relations. This method has been pursued in the context of a trade war between China and the United States and is based on the diversification of economic relations to include Africa and Egypt, among others.

Sherif pointed out that the discussions and agreements that took place between Egypt and a number of Chinese companies during the visit will have a significant impact on the Egyptian economy, because these companies will provide funds for the implementation of several projects in Egypt. These projects include the logistics hub project in the Suez Canal, a good point of convergence for imports and exports to and from China. This, he said, will turn Egypt into a gateway to the African continent.

On the second day of his visit, Sisi signed several agreements and contracts with a number of Chinese companies. These agreements aim at implementing various projects in Egypt with an investment value of about $18.3 billion, including the establishment of phase two of the Central Business District in Egypt’s new administrative capital, the pumping and storage station project at Mount Ataqa and the Hamrawein coal-fired power plant.

Also, Mohab Mamish, the chairman of the Suez Canal Authority, signed three agreements with Chinese companies with total investments exceeding $1 billion. These agreements focus on textile, gypsum board, non-woven products and modern raw materials, as per a statement issued by the authority Sept. 4.

Sherif noted that China is also seeking to establish a Silk Road to find alternative trade routes. Egypt can play a significant role in this project given its location, but this will ultimately depend on the agreements signed between the two countries.

On Jan. 21, 2016, Sisi agreed to Egypt's accession to the Silk Road network, which China plans to build. This route will interconnect the Asian, African and European continents at a cost of $47 billion and will go through 56 countries.

Tariq Radwan, the head of parliament’s Foreign Relations Committee, told Al-Monitor, “The Sino-African trade relations — which amount to $170 billion — will have a positive economic impact on Egypt, especially considering that Egypt is an important African trading partner for China and that there are joint projects between the two countries.”

Radwan said that among the projects that will be of great benefit to Egypt is the logistics hub of the Suez Canal, which will serve as a commercial and economic connecting point between Asia, Africa and Europe along with the Silk Road, which will contribute to opening new investments and boosting the international trade movement.

Motaz al-Daremli, a leader in the Nation’s Future Party, told Sada Elbalad website Sept. 1 that the economic and political gains achieved by Sisi's visit to China will be felt over the next 30 years. China has become one of the most important trade and industrial partners for Egypt in light of its growing role in the global economy. He pointed out that the volume of Sino-Egyptian investments is on the rise.

According to a report issued by the State Information Service Sept. 1 on the occasion of the Forum on China-Africa Cooperation, China's direct investment in Egypt jumped by $106 million in the first half of 2017, an increase of 75% year on year. This led China to rank sixth in the list of countries investing in Egypt after it was ranked 15th in 2016.

Meanwhile, Yomn al-Hamaki, a professor of economics at Ain Shams University in Cairo, told Al-Monitor that the relations between Egypt and China are good, as evidenced by the recent increase in the Chinese investments in Egypt. However, he added, these relations are yet to be optimally exploited by the state administrative apparatus, especially considering that China is the one benefitting the most from trade between the two countries.

Hamaki said that the projects to be implemented between the two sides need greater attention from the Egyptian state administrative apparatus in order for the apparatus to develop clear plans aimed at hastily implementing the projects.

Egypt also needs to provide incentives and sufficient information that would encourage Chinese investors to invest in other untapped areas such as mining. Egypt has significant mineral wealth and should open new avenues of investment to grease the Egyptian economic wheels and add new areas of investment to the ones that China is already investing in.

In an interview with the Chinese Xinhua News Agency Aug. 27, China's ambassador to Cairo Song Aiguo praised China's close relations with Egypt as a model for Sino-African cooperation. He noted that in 2017, China maintained its position as the largest trade partner and import source for Egypt.