The Monetary Policy Committee of the Central Bank of Egypt decided to hold key interest rates for the fifth consecutive quarter, which raised questions about the government's ability to lower the high inflation rate. 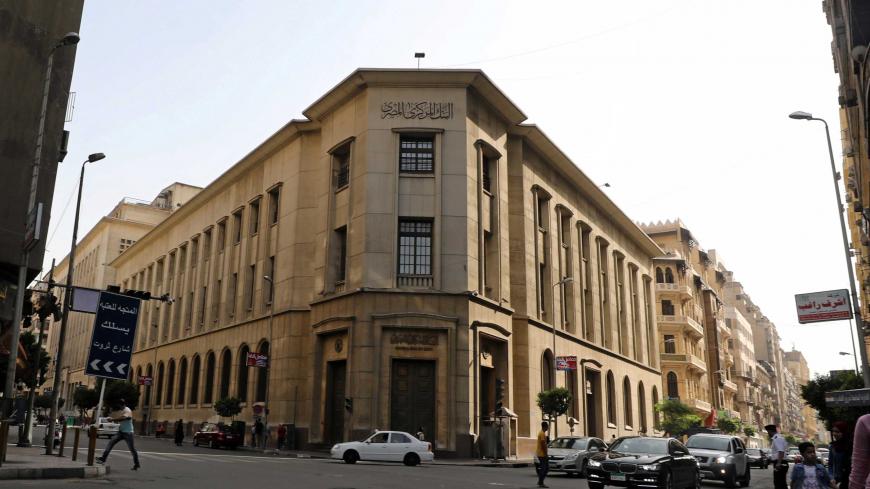 CAIRO — The Monetary Policy Committee of the Central Bank of Egypt (CBE) decided Nov. 15 to leave key interest rates steady, keeping the deposit rate at 16.75% and the lending rate at 17.75% for the fifth consecutive quarter amid a rising inflation rate that stood at 17.7% in October, compared to 16% in September.

This raised questions about the bank’s ability to reach the target inflation rate of 13% (± 3%) during the fourth quarter of 2018.

The CBE acknowledged the increasing risks resulting from a higher-than-forecast increase in the prices of some fresh commodities such as potatoes and tomatoes. However, it said that its restrictive monetary policy has managed to contain core inflationary pressures, allowing the annual core inflation rate to continue to fall to an average of 8.7% between July and October 2018.

The CBE said that “current policy rates remain in line with achieving single-digit inflation as soon as the effects of fiscal consolidation measures dissipate.”

Mohamed Abu Basha, a macroeconomic analyst at Cairo-based investment bank EFG Hermes, told Al-Monitor that the CBE’s decision to hold interest rates until the end of this year was “expected.”

He added, “There was no need to raise interest rates this year, but there is a need to contain inflationary pressures and monitor the global deflationary trend."

Global markets have recently witnessed confusion due to the trade war between the United States and China, the performance of eurozone countries, Japan and the United Kingdom, and the increasing interest rates, which have been putting emerging markets under further stress. This has been evident after the International Monetary Fund (IMF) cut its global growth forecasts for 2018 and 2019 to 3.7%, down from its July estimate of 3.9%.

Abu Basha noted that the increasing inflation rate witnessed in recent months was the result of an increase in the prices of some agricultural commodities, such as potatoes and tomatoes, by more than 90%. However, the CBE Monetary Policy Committee, according to him, saw that the rise in the prices of those goods is a seasonal trend that would eventually come to an end, thus placing downward pressure on inflation.

Tomatoes in Egypt caught a virus that destroyed most crops. Also, there was a shortage in the supply of potatoes because they were out of season and because some traders decided to monopolize the stored harvest, which led to an increase in the prices.

Potato and tomato prices rose by 146.7% and 43.9%, respectively, in October year over year, thus spiraling out of government control.

According to Abu Basha, there is another reason behind the CBE's decision not to cut interest rates, namely preserving foreign investments in debt instruments. Egypt lost about $8.4 billion in foreign investments between April and September in the wake of the crisis that hit emerging markets such as Turkey and Argentina and the unprecedentedly high US interest rates.

Ahmed Badra, a member of the board of the Egyptian Arab Land Bank, concurred with Abu Basha, telling Al-Monitor that the CBE is trying to preserve Egypt’s attractiveness amid the fluctuations plaguing emerging markets.

Inflation is one of the main challenges facing the government amid its attempt to implement the economic reform program it launched after it signed an agreement on Nov. 3, 2016, with the IMF in return for a $12 billion loan. Inflation reached 34.2% in July 2017, a level unseen in the past three decades.

Yaman al-Hamaki, an economics professor at Ain Shams University, told Al-Monitor that the government’s economic policy has cast a shadow over the Central Bank's decision and forced it to hold interest rates.

“It had no other option,” she said.

Hamaki noted that the increase in the prices of vegetables — which placed upward pressure on inflation — was the result of the monopoly and corruption plaguing Egyptian markets amid the absence of government control.

She pointed out that the Egyptian government is carrying out its economic reform program in the absence of serious plans. This is evidenced by the stagnant markets, the high inflation rates and low productivity. Hamaki added that the government is implementing austerity measures without undertaking concrete reforms within the industrial and agricultural sectors, which undermines the economic reform process adopted by the state.

On Oct. 31, the IMF agreed to release the fourth tranche of the $12 billion loan following a fourth review of the loan program. The IMF called on Egypt to continue to implement reforms, encourage private sector investments, improve transparency in state-owned enterprises and fight corruption.

Egypt is awaiting the approval of the IMF Executive Board to get $2 billion in December, the fifth tranche of the loan. It has thus far received $8 billion, and is expecting one final payment in June or July 2019.

The Egyptian Initiative for Personal Rights, a civil society organization, said in a report commenting on the third review of the IMF (November 2017-May 2018) that the Egyptian government has only implemented four out of the 14 procedures stipulated by the IMF to receive the third batch of the loan.

Salma Hussein, who drafted the report, told Al-Monitor that the IMF still agreed to proceed with the loan because Egypt implemented the basic measures it had required, such as raising interest rates and lifting fuel subsidies.

Asked about the effect of holding interest rates, she said that the current interest rates are still high and the government is widely required to decrease them because high interest rates deepen the public budget deficit and lead to higher inflation rates.

Hussein warned that keeping interest rates at this level poses a threat to the Egyptian economy as it could lead to a further decline in the value of the pound during the remainder of the 2019 fiscal year, thus sending inflation above 20%.

Abu Basha expects the CBE to reach the target rate by the end of the year. He said that during its meeting scheduled for December, the CBE will once again hold interest rates.