The central bank may raise rates further by 100 to 200 basis points in 2022 to be in line with tightening global monetary policies. Yields on T-bills are set to rise. 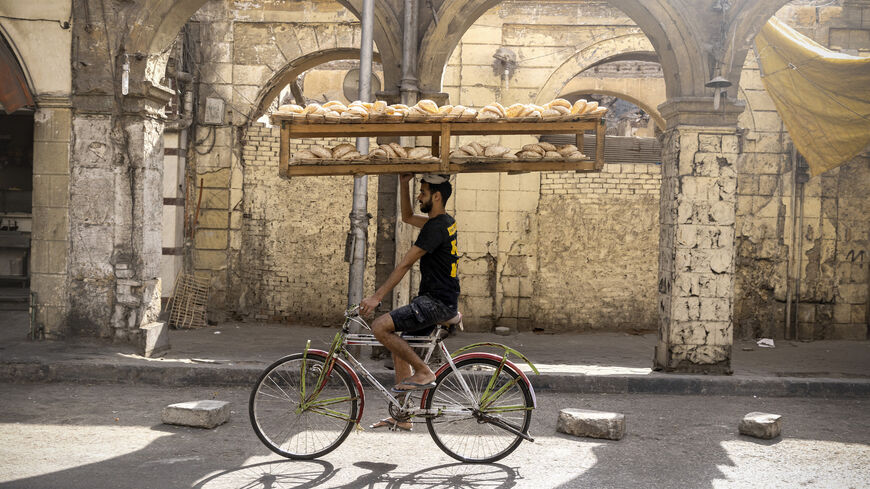 Workers on bikes deliver Egyptian traditional Baladi bread from a bakery in Al-Azhar neighborhood to bread stands on May 9, 2022, in Cairo, Egypt. Last month, Egypt introduced price controls on commercially sold bread in response to the rising price of wheat. Egypt imports 80% of its wheat supply from Russia and Ukraine, whose production and export have been disrupted by the invasion. - Roger Anis/Getty Images

Egypt’s authorities are drawing on a gradual tightening of monetary policy in a bid to contain inflation and sustain economic growth. The Central Bank of Egypt (CBE) has raised overnight interest rates by 3% since March 21, seeking measures to ease the repercussions of the Russia-Ukraine war, which has rattled the global economy since February.

The CBE’s Monetary Policy Committee (MPC) increased overnight rates by 2% on May 19 to 11.25% for deposits and 12.25% for lending. Earlier this month, the US Federal Reserve raised its policy rate by 0.50%.

“The recent rate hike comes in line with tightening global monetary policies in a bid to curb high inflation. In our opinion, the recent hike from CBE aims to serve two purposes: First, to maintain the attractiveness of the Egyptian pound by keeping up a spread in interest rates between the pound and international currencies, mainly the US dollar; second, to assist in curbing inflation,” Dina Ennab, sovereign analyst at Capital Intelligence Ratings, told Al-Monitor.

Ennab said that high levels of inflation could have a detrimental impact on any economy, as it partially erodes purchasing power and hence reduces private consumption, which is a major component of gross domestic product (GDP).

“In this regard, it is essential for the central bank to use all available tools to maintain price and exchange rate stability in order to preserve a good level of economic performance,” she noted.

Inflation in the most populous Arab country rose to 13.1% in April, up from 10.5% a month earlier, data from the state-run Central Agency for Public Mobilization and Statistics (CAPMAS) showed.

“Higher interest rates may help encourage saving rather than spending and should also help to reduce the pace of bank lending, thereby dampening domestic demand. Another point I would like to mention is that we also perceive the recent rate hike from CBE as a bid to maintain the stability of the exchange rate, as another bout of currency weakening similar to the one witnessed in the last couple of months would aggravate inflation by increasing the cost of imports,” she explained.

Asked whether she sees any impact on the state's domestic debt in terms of higher yields on T-bills and bonds, Ennab said, “Definitely.”

“The rate hike will lead to higher coupon rates for local treasury bills and bonds; however, keep in mind that the magnitude of the impact depends on numerous factors such as the amount of new borrowings and inflation/ interest rate expectations in the short to medium term,” she said.

The country’s foreign reserves rose by $41.5 million to $37.12 billion in April, according to CBE data.

As for the outlook of Egypt’s monetary policy, Ennab expects the CBE to raise rates as necessary to maintain price and exchange rate stability.

“As long as inflation is above the targets of the CBE, we could fairly assume more rate hikes in the pipeline. With regards to future rate hikes in the US and its impact on the Egyptian monetary policy, as mentioned above, the CBE will aim to maintain exchange rate stability by preserving the attractiveness of the Egyptian pound with higher rates,” she said.

“The sharp rise in global commodity prices, especially wheat and fuel, coupled with the 17% pound devaluation will continue to keep yearly inflation rates high for some time, although we expect inflation to eventually moderate in the fiscal year (FY) 2023 to an average of 12%, year-on-year,” Fitch Ratings told Al-Monitor in an emailed statement.

“We believe CBE has tried to preempt the expected rise in inflation in Egypt and hikes in US Fed policy rates, but further inflation surprises and an even more hawkish Fed would lead the CBE to tighten monetary policy further to support the attractiveness of the carry trade. Egypt has frequently used nonresident portfolio inflows to finance the current account deficit,” Fitch Ratings said.

Egypt is betting on a tightened monetary policy to ease inflationary pressures on economic growth. Minister of Planning and Economic Development Hala Elsaid told CNBC Arabia on May 23 that Egypt's economy would grow by 6% in the fiscal year 2021/22 ending on June 30.

Fitch Ratings said tighter monetary conditions could drag on growth in the fiscal year 2022/23, especially if the government sticks to its primary balance target. “Aside from higher rates, rising inflation is itself a key downside risk to our real GDP growth forecasts given the contribution of domestic demand, especially households’ consumption, to Egypt’s GDP,” Fitch said, noting that growth may accelerate to 6% in FY22 and 4.5% in FY23 from 3.3% in FY21.

As for the impact on issuances of T-bills, Fitch Ratings forecast yields to increase to maintain the attractiveness of the carry trade amid higher policy rates and higher inflation.

“The last time inflation reached 13%, it was in April 2019 and yields on 6-month T-bills were about 17% (with the headline policy rate at 15.75%). Yields on three-month and six-month Treasury bills have been up c.170bp and c.160 basis points year to date, respectively, as inflation has been trending upwards and the CBE hiked benchmark rates by 300 basis points,” Fitch added.