Egypt signed an agreement worth 145 million euros ($177 million) with the African Development Bank as part of its recent plan to improve its railway system to prevent crashes. 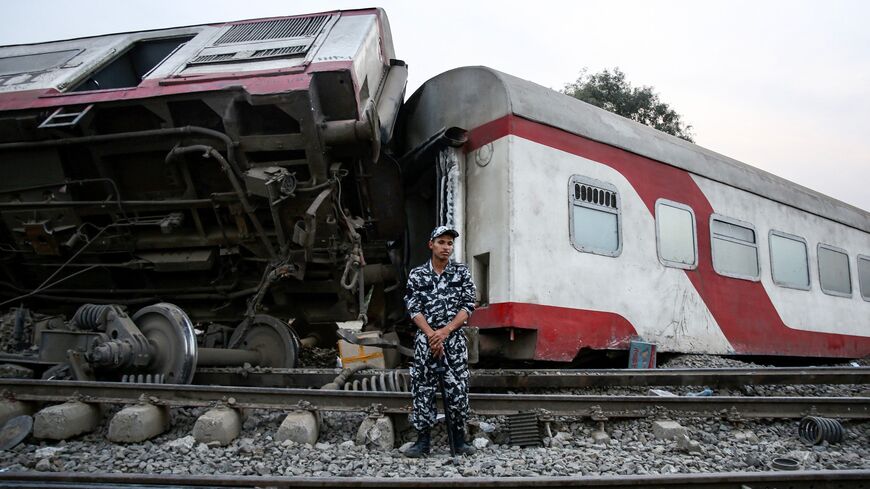 A member of the Egyptian security forces stands guard in front of an overturned passenger carriage at the scene of a railway accident in the city of Toukh in Egypt's central Nile Delta province of Qalyubiya on April 18, 2021. The train accident left 23 people dead and 139 injured, after it derailed while headed from Cairo to Mansoura, about 130 kilometers north. - AYMAN AREF/AFP via Getty Images

According to a ministry statement, the agreement aims to boost the railway’s efficiency and safety by supplying the Egyptian Railway Authority with the European Train Control System Level 1 for 953 kilometers of main railway lines, including those connecting with Alexandria, Cairo, Assiut, Naj Hammadi, Banha and Port Said. The system will use sensors placed on engines, wagons and along rail lines.

This establishment of the high-speed electronic network linked to existing tracks is part of an effort to reduce the frequency of train crashes.

In the span of less than a month, Egypt witnessed five train accidents.

The agreement with the African Development Bank comes in the wake of the Transport Ministry’s announcement April 26 of its plan to develop the railway sector. The project to further develop the nation's railways is estimated at 225 billion Egyptian pounds (around $14 billion) and is slated to be completed by 2024.

Hassan Mahdi, a professor of roads engineering and transportation at Ain Shams University in Cairo, told Al-Monitor via phone, “The funding clause in the railway system development project is not a problem, because the amendments of the railways law allow the private sector to be involved in investment in the transport sector. But it is important to set programs that would contribute to a real development of this sector,” stressing that this does not mean privatizing the transportation sector.

“Involving the private sector in this plan would have benefits for the population and the state,” he said.

On March 4, the Egyptian parliament approved a draft law submitted by the Cabinet to amend provisions of Law No. 152 of 1980 regarding the establishment of the Egyptian Railway Authority, providing for allowing the private sector to participate in the management, operation and maintenance of the railroad networks across the country in cooperation with the railway authority.

“We need to develop the railway system’s infrastructure. The problem is not technical as much as it is related to the human factor, which is behind all the train accidents. The state is trying to develop the railway in such a way to decrease dependence on employees and focus on electronic signals, and also work on retraining the railway cadres and assessing their skills to integrate them in other sectors,” Mahdi said.

Egyptian Transport Minister Kamel al-Wazir said during a meeting April 26 with several new engineers who joined the Egyptian Railway Authority that the ministry’s main focus is to train and educate workers to deal with new equipment. This is in addition to behavioral and psychological courses to better handle passengers and team members, he added.

Mohammed al-Zain, a member of parliament’s Transport Committee, told Al-Monitor, “This agreement [with the African Development Bank] would contribute to the implementation of the plan devised to revamp the railroad, which hasn’t seen much in the way of improvements since the early 1990s. This is particularly true in relation to the signaling system and dilapidated infrastructure, which caused many train crashes to occur.”

“The government has recently started taking steps to develop the railway facility, and has made relative improvements so far. But the errors [accidents] that occurred are the result of mistakes in relation to the human factor, which impedes further improvements of the railway,” Zain said.

The Egyptian railway is the oldest in Africa. It was established in the 1850s and includes 705 stations, 1,330 crossings, 35,000 passenger cars, 10,000 cargo cars, and 800 locomotives. Some 500 million passengers and 6 tons of products travel annually on the rail system, according to the State Information Service data.

According to a 2020 World Bank report, Egypt has about 5,000 kilometers of rail lines, a third of them double tracked.

Some 75,000 employees work at the railway, Abdel Fattah Fekri, the head of the Railway Workers Syndicate, told Al-Monitor in July 2018.