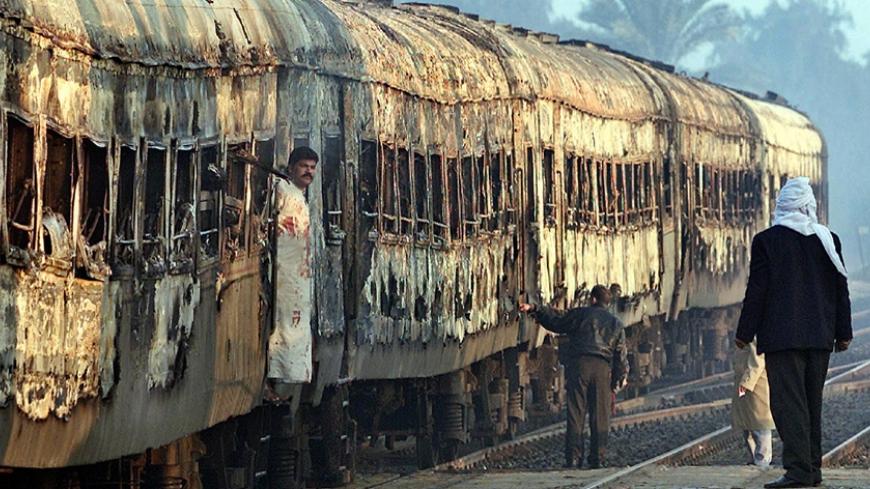 Egyptian railroad workers stand beside a train that caught fire about 50 miles south of Cairo, Feb. 20, 2002. It is described as one of the deadliest accidents in the history of railroads, killing 383. - REUTERS/Aladin Abdel Naby

CAIRO — Two horrific accidents on the same day in Egypt earlier this month have brought transportation safety into question as authorities examine numerous flaws in the system. Officials claim those problems range from poor maintenance to drug-addicted drivers to unqualified employees hired through nepotism.

A bus and a truck collided Sept. 7 south of Cairo, leaving 22 people dead. Just a few hours later, train No. 80 from Cairo to Aswan derailed and three cars overturned, leaving five passengers dead and 31 injured, according to a statement from the Ministry of Health.

The train derailment took place at Al-Ayat, Giza, which is known as the “level crossing of death,” as the number of accidents there is high. The most famous crash was that of the “Upper Egypt train” in February 2002. Fire broke out on board train No. 832 from Cairo to Aswan, leaving 361 dead. It was described as one of the deadliest accidents in the history of railroads. Mohamed Ibrahim El Demery, the transportation minister at the time, was forced to resign as a result.

“I boarded the train because the ticket was cheap. Before Al-Ayat station, we felt a strong shock, then the vehicles overturned,” Fathy Mahmoud, one of the 2002 crash survivors, recalled in a recent phone interview on a TV show.

After the recent accidents, some officials made statements that angered Egyptians.

Gen. Medhat Shousha, the head of the Egyptian Railway Authority (ERA), said the day after the derailment, “Accidents in Al-Ayat have nothing to do with flaws in the railways, but they rather happen as a result of chance circumstances. The authority conducts studies after every accident to know the reason and help solve the problem so that it does not happen again.”

Earlier in the year, Gen. Adel Turk, the head of the General Authority for Roads, Bridges and Land Transport, had told daily Youm7, “Broken roads force drivers to slow down, which helps reduce accidents.”

According to the World Health Organization, Egypt ranks No. 10 among the countries with the most road accidents. And according to an ERA report, the total number of train accidents in the past five years was 4,777.

The August report by the Central Agency for Public Mobilization and Statistics (CAPMAS) said there were 14,500 road accidents in 2015, causing 25,500 deaths. Human error represents 64% of the causes of road accidents, followed by the technical condition of vehicles (21.9%) and road conditions (2.4%). The minimum economic cost for accidents totals 30.2 billion pounds ($3.4 billion); that figure is expected to reach 31 billion pounds ($3.5 billion) in 2020, CAPMAS reported.

However, Gen. Magdy El Shahed, the former head of the Central Traffic Department, disputed some of those figures, which he said are based on incorrect statistics from misleading official reports.

“Egypt ranks first among all countries of the world in the number of casualties and injuries of road accidents. The official numbers announced about accidents are not correct, as the real numbers could be double those made public. Official reports are based on accidents reported to the police, which only represent about 20% of accidents, as most victims only file a report to receive compensation,” Shahed told Al-Monitor.

“One catastrophic flaw in the traffic law is that it allows [for resolutions] when drivers do not have licenses, without the need to file reports, and the administrative measures are canceled once the party that is at fault pays half the minimum fee,” Shahed said.

Another flaw that could be considered catastrophic is that some train conductors use narcotics, endangering their passengers’ lives. Conductors should be subject to random, unannounced drug tests, Gamal Oqba, the deputy head of the Manpower Committee of the House of Representatives, told the Parlmany news website Sept. 7.

Sometimes, neglected routes and equipment are to blame, according to Hassan Abdelzaher Mahdy, a road and traffic expert at the Egyptian Authority for Roads.

“The system suffers from negligence and lack of periodic maintenance for main roads and trains. The flawed system of transportation requires rehabilitation of the roads and railways and holding those responsible for the negligence accountable,” Mahdy said.

“Al-Ayat level-crossing [sees] many violations by the families who reside there, as they build houses near the rails, which must be completely clear so as not to cause any malfunction to the movement of trains,” Mahdy added. “ERA safety measures are lacking, and the signaling system requires improvement so that we can reduce the human element and replace the workers at train switches with automated signaling systems.”

Mahdy called for reducing the number of train runs, which range from 600 to 936 every day.

He added this startling estimation, “The ERA operates with about 80,000 employees who are not qualified to work and who were hired through nepotism and cronyism, while it could be operated with only 6,000 employees.”

For his part, Gen. Sayyed Teeama, a lawmaker and the head of the Transportation Committee in the House of Representatives, told Al-Monitor, “The system of transportation suffers from severe negligence and statements by its administration are contradictory. They claim that the systems of switching have become automatic, while they are still done manually.”

Teeama said, “We discussed the problems with the heads of the ERA to find solutions. However, they always demand an increase in the price of tickets and claim that their problems are only financial, without proposing any ideas regarding safety measures or developing and maintaining the rail lines and trains.”

He added, “If the situation continues this way without a specific vision to enhance the roads and railways, officials should be dismissed and the ERA should be sold to investors who could work on developing it.” He said the device that controls the rail crossing at Al-Ayat has not been functioning for years.

Shahed said in this regard, “Accidents … will increase, given the negligence from which the Road Authority and the Railway Authority suffer — and given the catastrophic flaws in the traffic law, especially since both agencies only think about money.”

He added, “The minister of transportation knows very well that the trains are not safe. Still, he only calls for raising ticket prices and ensuring maintenance of rest stops.”