While the government’s spending of billions of dollars to develop roads and the transportation infrastructure have reduced accidents in recent years, Egypt still ranks among the top nations in the world for traffic deaths. 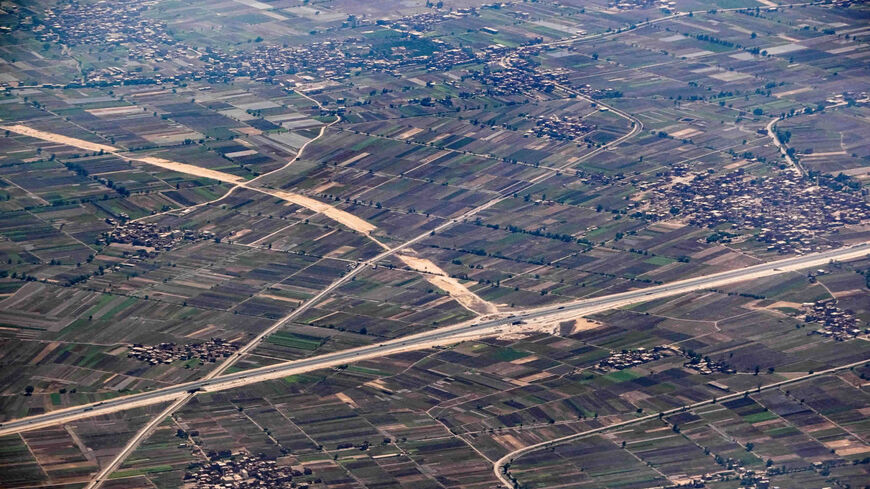 An aerial view shows a section of the new "Regional Ring Road" highway project, passing by the northern village of al-Naaminah in the fertile Nile Delta agricultural region in Sharqiyah province, Egypt, May 28, 2021. - Amir Makar/AFP via Getty Images

CAIRO — Egyptian authorities announced April 21 that one Egyptian national had died and two others were injured in a collision between a tourist bus and a private car on the Qena-Luxor agricultural road. Meanwhile, 38 Polish tourists made it out alive.

This accident came shortly after an even deadlier collision occurred in southern Egypt. On March 13, the Egyptian Ministry of Health announced that 10 people were killed and 14 others injured in a crash between a bus and car on the Abu Simbel-Aswan road.

Media reports indicated that among the 10 deaths, four people were French and one was Belgian, in addition to five Egyptians. Social media users circulated videos showing that the tourist bus caught fire on the Aswan road.

On April 19, Gamal al-Saeed, a member of the parliamentary Transport and Communications Committee, submitted a motion addressing Minister of Transport Kamel al-Wazir and Minister of Tourism and Antiquities Khaled al-Anani regarding the March 13 accident.

Saeed explained in his motion that “these tragic incidents have negative impacts on the flow of tourism in Egypt, and this is detrimental to the national economy.”

He said, “The Abu Simbel-Aswan road has seen many accidents in 2021, which resulted in the death of 20 people and the injury of 133. This shows how dangerous this road, which is a vital crossing for citizens and tourists, is.”

He added, “Around 75 million Egyptian pounds [$4 million] were spent on the development and improvement of the Abu Simbel-Aswan road.”

In March 2022, Wazir announced at a public event that “the cost of road projects around Cairo has reached 300 billion Egyptian pounds [$16 billion],” according to local media.

Observers who spoke to Al-Monitor praised road development projects in Egypt and their positive impact on reducing road accidents, but they believe that there are other reasons that lead to accidents, mainly the behavior of drivers on the roads and heavy transport vehicles. They stressed the importance of tightening traffic control to deter violators.

Hassan Mahdi, a professor of roads and bridges at the Faculty of Engineering at Cairo's Ain Shams University, told Al-Monitor, “The human factor is the main cause of road accidents. If roads were the problem, accidents would have recurred in the same spots.”

He said, “The behavior of drivers on the roads in Egypt — speeding and not adhering to traffic lanes — lead to traffic accidents.”

Mahdi believes that “new road projects in Egypt have led to a significant decrease in road accidents in Egypt, according to the Central Agency for Public Mobilization and Statistics [CAPMAS].”

He explained that “the roads in Egypt are good, and their design helps the driver to survive in the event of an accident.”

The Egyptian government has been building bridges and tunnels, raising the quality of roads and developing them since 2014, after Egyptian President Abdel Fattah al-Sisi launched the National Roads Project, which aims to build dozens of roads to connect governorates and relieve traffic congestion, along a distance of 4,400 kilometers (2,700 miles). Separate roads were built for heavy vehicles, and private ones were constructed for transport trucks and trailers. Specific times have been allocated for their movement on some bridges and roads, such as the main Ring Road in Cairo — all as part of the national project.

Egypt is also implementing three projects within the smart transportation system, namely the express train, the monorail and the electric train, in addition to implementing new subway lines and developing old lines, at a cost of 757 billion Egyptian pounds ($41 billion) until 2024, according to the state-owned Akhbar Al-Youm newspaper.

Al-Masry Al-Youm reported April 15 that member of parliament Nada Alfi Thabet “made a proposal to the government to study reorganizing the movement of transport vehicles and heavy transport on highways,” as these cause many accidents in Egypt.

Thabet said, “The roads need reorganization of the traffic of heavy transport vehicles of all kinds, in light of the recent accidents. They must be banned from moving on highways in governorates in the morning, when there is heavy traffic of other types of vehicles. Heavy vehicles would be allowed to drive during the evenings between 11 p.m. and 6 a.m.”

According to the NADA Foundation for Safer Egyptian Roads, an Egyptian nongovernmental organization, the death rate due to road accidents in Egypt is among the highest in the world, with 42 deaths per 100,000 individuals.

The foundation said that traffic accidents are the No. 1 cause of death for Egyptian youth between the ages of 15 and 35, and that an average of four children die every day during or as a result of car accidents.

The foundation states that 50,000 people are injured or disabled every year due to traffic accidents.

In regard to the impact of road accidents on the economic situation, the foundation stated that Egypt's gross domestic product loses 3% annually due to road accidents.

According to a June 2021 report published by the World Health Organization, about 1.3 million people die annually as a result of road accidents. The organization notes that “more than 90% of road traffic deaths occur in low- and middle-income countries,” despite the fact that they account for only about 45% of the vehicles in the world.