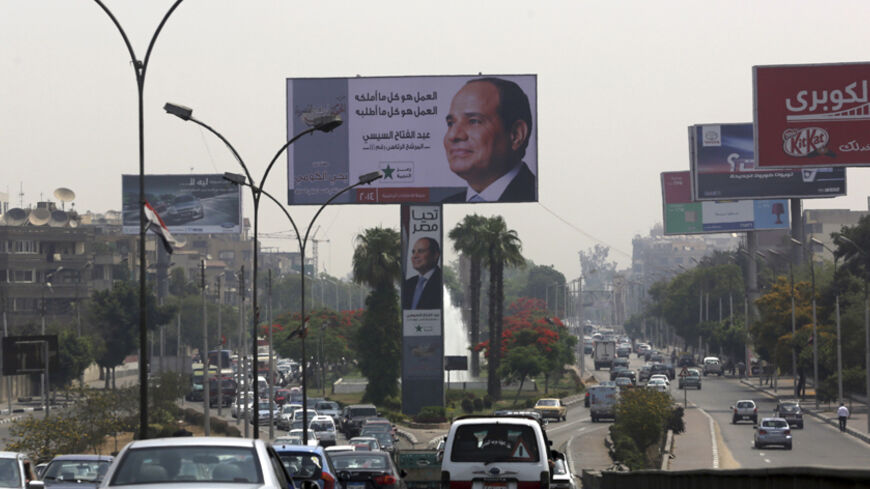 A huge electoral banner for presidential candidate and former army chief Abdel Fattah al-Sisi is seen among traffic during the third day of voting in the Egyptian presidential election in Cairo, May 28, 2014. - REUTERS/Asmaa Waguih

CAIRO — Egyptian President Abdel Fattah al-Sisi has approved tough new amendments to the traffic law that entered into force Nov. 24. The changes followed a rise in fatal road accidents, which take the lives of thousands each year. It is unclear, however, whether the amendments will be enough to address the problem.

“This seems to be a good step in the right direction, but we are waiting for the new parliament to issue new and inclusive laws,” Samy Mokhtar, head of the Egyptian Association for the Care of Road Accident Victims and Their Families, told Al-Monitor in a phone interview.

Mokhtar contends that the new amendments should have given emphasis to targeting driving without a license. According to Mokhtar, the fine for this infraction is not severe enough to serve as a deterrent.

Based on the new amendments, a driver who causes injury to another person or persons while driving in the opposite direction and under the influence of drugs or alcohol faces imprisonment of no less than one year, with a possible increase to two years, plus a fine of no less than 10,000 Egyptian pounds ($1,399). Should the accident result in the death of one or more persons or lead to a victim's total disability, the perpetrator could face up to seven years in prison and a fine of no less than 10,000 Egyptian pounds. In addition, the driver's license will be revoked and he or she cannot not be issued a new one for a period equal to the term of imprisonment.

The impetus behind the amendments was the Nov. 5 accident involving a bus carrying Egyptian schoolchildren that crashed into three other vehicles, including a tank truck, on the Cairo-Alexandria Agricultural Road in Beheira governorate, about 263 kilometers (163 miles) from Cairo. Eighteen children died, their corpses burned beyond recognition.

Following the accident, the government imposed new restrictions on trucks and trailers. Beginning on Nov. 16, trucks and trailers were banned from traveling on major highways between 6 a.m. and 11 p.m in an attempt to reduce road accidents. Drug tests will also be conducted.

Mokhtar pointed out that the traffic law was originally issued in 1973 and has been amended three times previously, once in 2008 and twice in 2014. He said that the Agricultural Road and the Cairo-Alexandria desert road experienced the most accidents due to urban sprawl; in many areas, highways are now surrounded by buildings, and people crossing the roads are run over. Mokhtar further stated, “Eighty percent of road accidents are caused by human error.”

The condition of Egypt's roads and bridges are also an issue, said Saad al-Geuoshy, head of the Roads and Bridges Authority, speaking on the sidelines of the Builders of Egypt Forum, which kicked off on Nov. 25. About 700 bridges and 75% of the country's roads are on the verge of collapse due to lack of maintenance.

Road accidents cost the Egyptian economy billions of pounds. According to Mokhtar, “Egypt is losing 20 billion EGP (nearly $2.8 billion) due to road accidents every year through compensation and losses in human resources.” He said that road traffic fatalities stood at 7,000 in 2007 and jumped to 13,000 in 2013.

A 2012 World Health Organization report also addresses Egypt's traffic deaths, saying reducing speeding and encouraging the use of seat belts could help reduce what it cited as more than 12,000 annual road fatalities. Mokhtar indicated that the number of fatalities could soar in the future, as there have been an unprecedented number of accidents occurring in Egypt, especially during the last three months.

“The new amendments are good, but the police should enforce them against everyone rigorously, not only taxi drivers,” taxi driver Salah Sedeq told Al-Monitor. Mahmoud Abdel Aziz, another taxi driver, said, “There are a slew of decisions, but they are futile and have so far not amounted to anything.” He claimed that many people are driving under the influence of drugs, and the financial penalty is not enough to deter them. He called for tougher punishments.

Meanwhile, Yousry el-Rouby, former assistant minister of interior for the traffic sector, told Al-Monitor that Egypt is suffering from a haphazard traffic system, and the solution lies in Egypt conducting scientific studies to examine the problem and come up with scientific solutions. He said most road accidents are caused by drivers' ignorance and dangerous behavior and that sustained awareness programs are needed.

The last quarter of 2014 was punctuated by more horrific road accidents. On Dec. 9, in Giza, two vehicles collided, leaving four dead and 10 injured.