Poor infrastructure is largely to blame for the more than 2,000 yearly deaths on Yemen’s roads. 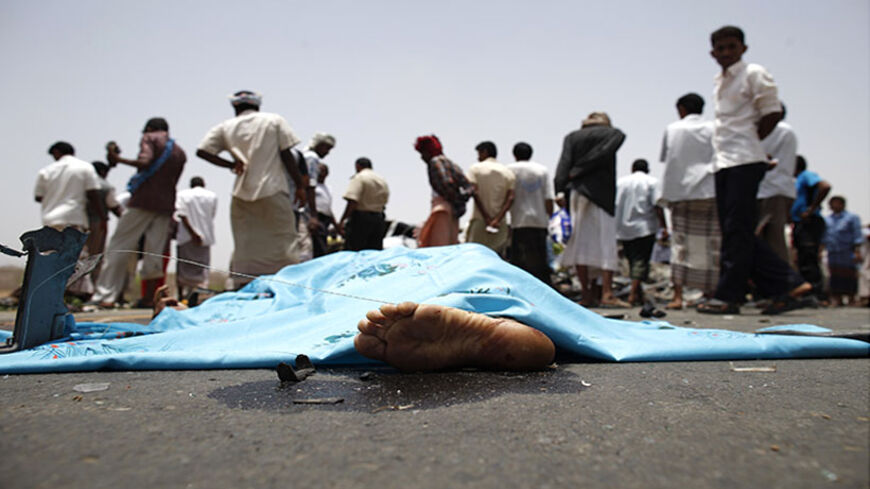 A covered body is seen as policemen and people check the scene of a collision on a highway leading to a border crossing between Yemen and Saudi Arabia, May 18, 2013. - REUTERS/Khaled Abdullah

Cars in Yemen are instruments of death as much as a means of transportation. The 1 million vehicles cruising the streets of Yemen are more dangerous than the 60 million firearms in the country — in times of peace, of course.

In Yemen, al-Qaeda cells are actively killing civilians and soldiers, bloody wars are ravaging the south and the far north, and US drones strike at any time. But the biggest danger to your life is a traffic accident on a public highway.

In April, for example, firearms killed 26 people in Yemen and injured 78. In contrast, 42 people, including nine motorcyclists, were killed and 146 others were injured in traffic accidents in the first week alone. The victims came from all age groups.

In the unofficial competition between weapons and cars in Yemen over who will be the “killer of the year,” cars always win.

Official statements and reports say that 1 million vehicles cruise the streets of Yemen and cause more than 2,300 deaths per year on average, or about one death per 400 cars.

Official Yemeni traffic accident statistics during the last five years are dreadful. According to the numbers, traffic accidents have killed 13,360 and injured 76,074. For comparison, roughly 2,000 of the revolution’s supporters, mostly youths, were killed during the armed conflicts in 2011.

From 2000 to 2010, nearly 30,000 Yemenis were killed and 200,000 injured in traffic accidents. Yemen’s Interior Ministry often blames these accidents on excessive speed and a lack of obedience by drivers and pedestrians to traffic rules. This is only part of the truth. The roads are hazardous, narrow and poorly maintained and constructed, also a major cause of car accidents.

For example, in the capital Sanaa, just meters from the presidential palace, locals have dubbed a major intersection that connects five streets the "Triangle of Death" for the number of accidents caused by the poor planning of the intersection. There had been traffic accidents there almost every day until a few years ago, when the intersection was turned into a roundabout, causing a remarkable decrease in accidents.

The "Triangle of Death" is not unique. Some areas experience regular accidents without the authorities even examining their causes, which are often obvious and need nothing more than repair. That would require a responsible authority, something not yet available.

One road with a reputation of causing frequent deaths connects north and south Yemen and runs between Sanaa and Aden. Midway on that road, the driver can enjoy a beautiful view as he crosses the famous Samara mountain. But you rarely cross this spot without seeing deaths or injuries caused by a recent traffic accident. Despite the mountain’s beauty and charm, it has a very narrow and dangerous road that lacks guardrails or traffic signals.

The World Bank announced June 2 that it would start financing a major road project in Yemen, linking the province of Amran in the north with the province of Aden in the south by a better alternative road to the current one, where many accidents happen.

When the Interior Ministry issued its June 10 report on road accidents in Yemen, it noted that one of the main causes for accidents is “rain on the road.” While that explanation seems logical, the real reasons are the poor road conditions, lack of drainage lines and poor construction, making roads very hazardous when it rains.

In the neighborhoods of Sanaa, there’s a joke about the poor quality of the asphalt: The asphalt is fixed with saliva and quickly disintegrates whenever a driver brakes hard.

There’s another Yemeni saying that goes, "Driving in Yemen is self-defense."

The fault, though, is not always linked to the vehicle, the driver or the road. Yemeni pedestrians also carry their share of the blame. Despite the existence of tunnels and bridges to facilitate crossing the streets such as at al-Sitteen Street, perhaps the only thoroughfare in Sanaa, pedestrians rarely use them. Unlike in the rest of the world, instead of driving faster in this lane in the absence of pedestrians, in Yemen you have to be constantly on guard for pedestrians trying to cross there.

Another problem is that people generally don’t buy car insurance. Perhaps only the cars of government institutions, large corporations and international organizations are insured, a small percentage of the cars in the country.

Death is creative in finding ways to reach Yemenis. Those who have survived violence and wars still have to worry whenever they are driving or walking on the streets.