In a White House address, President Joe Biden pledged to rally international support for reconstruction efforts in the Gaza Strip. 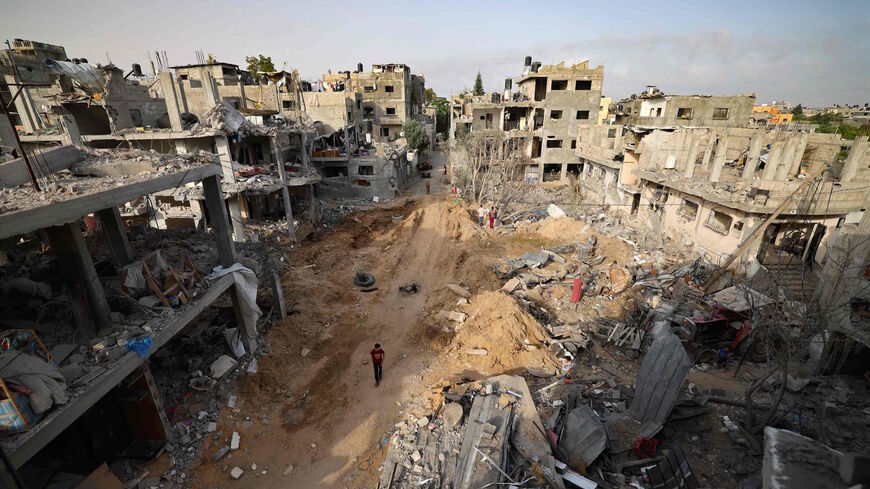 A Palestinian man walks in a neighborhood hit by Israeli bombardment in Gaza City, after a cease-fire brokered by Egypt between Israel and Hamas, on May 21, 2021. - MOHAMMED ABED/AFP via Getty Images

World leaders praised the cease-fire between Israel and Palestinian militant group Hamas, which ended 11 days of hostilities, but say now is the time for the two sides to build on the agreement for a lasting peace.

United Nations Secretary-General Antonio Guterres welcomed the cease-fire, tweeting, “Israeli and Palestinian leaders have a responsibility beyond the restoration of calm to start a serious dialogue to address the root causes of the conflict.”

Israeli Prime Minister Benjamin Netanyahu’s office on Thursday night announced that Israel would accept an Egyptian-brokered truce with Hamas that came into force at 2 a.m. Friday. Cairo said it would send two delegations to monitor the warring parties’ commitment to the cease-fire, Reuters reports.

The cease-fire halted the worst fighting the region has seen since the 2014 war. Israel said more than 4,300 rockets fired from Hamas and other militant groups in Gaza killed 12 people in Israel, including two children. Israeli airstrikes in the Palestinian enclave killed 232 people, including 65 children, health officials in Gaza said.

These hostilities have resulted in the tragic deaths of so many civilians, including children. I send my sincere condolences to all the families, Israeli and Palestinian, of those who lost loved ones and my hope for a full recovery for the wounded.

"I believe the Israelis and Palestinians equally deserve to live safely and securely and to enjoy equal measures of freedom, prosperity and democracy," President Joe Biden said during a White House address Thursday.

Biden pledged to rally international support for Gaza’s reconstruction and said there was a “genuine opportunity” to make progress toward Israeli-Palestinian peace. As part of that effort, US Secretary of State Antony Blinken will head to the region “to discuss recovery efforts and working together to build better futures for Israelis and Palestinians," the State Department said.

Other world leaders hailed the cease-fire, including UK Prime Minister Boris Johnson, who called on the region to work toward a “durable solution” to the conflict.

I welcome news of a ceasefire in Israel and Gaza. Leaders in the region must now work to find a durable solution to the Israeli-Palestinian conflict that prevents terrorism, ends the cycle of violence and delivers a sustainable and just peace.

“I urge both sides to consolidate it and stabilise the situation in the long term,” von der Leyen said. “Only a political solution will bring lasting peace and security to all.”

I welcome the cease-fire that came into force today at 2am between Israel and Hamas.

I urge both sides to consolidate it and stabilise the situation in the long term.

Only a political solution will bring lasting peace and security to all.

France, which had worked on a cease-fire proposal with Egyptian President Abdel Fattah al-Sisi and Jordanian King Abdullah II, called for the relaunch of the political process between the Israelis and Palestinians.

“The escalation of recent days underlines the need for a genuine political process to be relaunched between the parties with the appropriate international support; without this, we know the cycles of violence will recur,” Foreign Minister Jean-Yves Le Drian said.

More than 72,000 Palestinians were displaced by Israel’s air and artillery bombardment of densely populated areas in the impoverished Gaza Strip, the UN said. Hundreds of buildings and homes, as well as several hospitals, were damaged or destroyed.

I welcome the ceasefire between #Gaza & #Israel. I extend my deepest condolences to the victims of the violence & their loved ones. I commend #Egypt & #Qatar for the efforts carried out, in close contact w/ the @UN, to help restore calm. The work of building #Palestine can start.