US condemns Erdogan remarks toward Israel as anti-Semitic 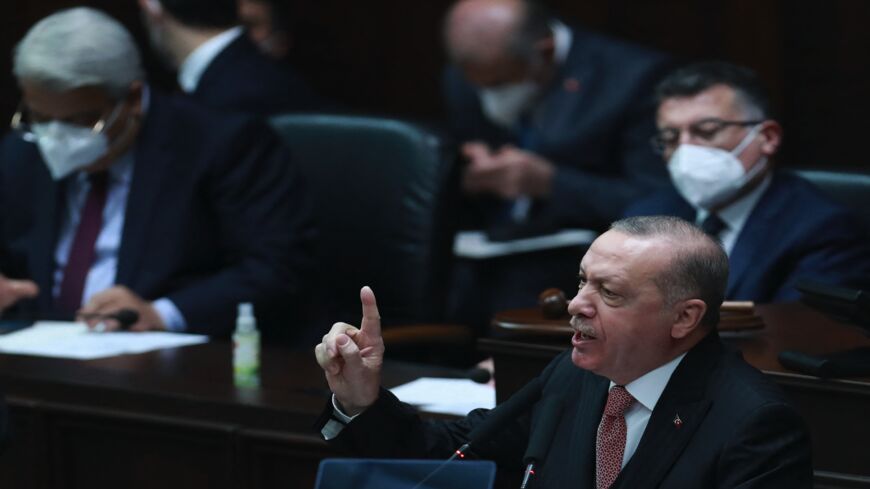 Turkish President and leader of the Justice and Development Party Recep Tayyip Erdogan speaks during his ruling party's group meeting at the Grand National Assembly of Turkey in Ankara on April 21, 2021. - ADEM ALTAN/AFP via Getty Images

ISTANBUL — As fighting between Israel and Hamas continues, Turkish President Recep Tayyip Erdogan drew backlash from Washington Tuesday for speaking out against the violence that has caused more than 200 deaths, the vast majority of them Palestinians killed in Israeli airstrikes.

During a televised speech Monday, Erdogan criticized the ongoing conflict and said he had spoken to a “Jewish prime minister” during a past visit who told him it was the “greatest pleasure” to kill Palestinians when the unnamed official served as a general in the Israel Defense Forces.

Erdogan said, “This is part of their nature" and “they are only satisfied by sucking blood."

Without specifically citing the comments, US State Department spokesperson Ned Price condemned Erdogan’s rhetoric as “anti-Semitic” and called it “reprehensible” in a statement issued Tuesday.

“We urge President Erdogan and other Turkish leaders to refrain from incendiary remarks, which could incite further violence,” Price said in the statement. “Anti-Semitic language has no place anywhere. The United States is deeply committed to combatting anti-Semitism in all of its forms.”

The message further strained already tense US-Turkish relations and was refuted by officials in Ankara, who said the targeting of Erdogan distracts from ongoing violence in Israel and the occupied territories.

“The attempt to stain our courageous and outspoken leader’s struggle with a despicable charge of anti-Semitism is appalling,” Turkish presidential communications director Fahrettin Altun said Wednesday in a series of tweets. “It is a cowardly statement to divert the international attention away from Israel’s crimes against humanity.”

Turkey’s Chief Rabbinate Foundation, which represents the nation’s Jewish community, also denounced the US statement as “unfair” in a tweet Wednesday, saying Erdogan has “always been constructive, supportive and encouraging toward us.”

Since the conflict began on May 10, at least 212 Palestinians have died under Israeli bombardment in the densely populated Gaza Strip, and about 12 Israeli citizens have lost lives due to Hamas rocket and mortar fire. In a statement Tuesday, the United Nations estimated 58,000 Palestinians have been displaced amid the ongoing fighting.

Israeli officials said Wednesday there was no timeframe for ending hostilities despite rising calls for a cease-fire from the international community, including US President Joe Biden.

Soli Ozel, a lecturer of international relations at Kadir Has University in Istanbul, said Erdogan’s comments mark a deviation from a long-held stance to prevent anti-Semitic language within his ruling Justice and Development Party and could further postpone attempts to improve fraught Turkish-Israeli relations.

“I certainly don’t think this was politically expedient, certainly not wise and absolutely unnecessary, in my judgment,” Ozel told Al-Monitor, noting Erdogan’s use of “Jewish” instead of “Israeli” when referring to the former prime minister. “He could have been very tough without speaking that way.”

Ozel also said recent developments have undermined Erdogan’s attempt to act as mediator in regional conflicts, damaging his aim to represent Muslims on the international stage.

“You speak so loud and you are the champion of Palestinians or the champion of Hamas, but you are not in the game, and it is obvious … because nobody’s really talking to you seriously,” Ozel said. “You are not the mediator, partially because you don’t have representatives in Egypt or in Tel Aviv.”

Gallia Lindenstrauss, a senior research fellow at the Institute for National Security Studies in Tel Aviv who specializes in Turkish foreign policy, noted pro-Palestinian sentiments are widely shared by the Turkish public, materializing in a number of sizeable demonstrations in recent days against Israeli bombardments.

Opposition parties have also made statements in support of Palestinians, but Lindenstrauss said the current rhetoric from Ankara has held little sway on the ground.

“Beyond rhetorical fury and unrealistic proposals, the impact of Ankara on the developments in this recent round of violence has been fairly limited,” Lindenstrauss told Al-Monitor.

She added, “Turkey has not been involved in negotiations on a cease-fire, and Israel will reject any such attempts and will prefer the assistance of other actors, most notably Egypt.”

In the same speech Monday, Erdogan also denounced the Biden administration’s decision to approve a $735 million sale of precision-guided weapons to Israel. The Turkish leader linked the news with Biden’s recent move to recognize the 1915 Armenian genocide last month, a designation rejected by Ankara.

“Mr. Biden, you sided with the Armenians on the so-called Armenian genocide,” Erdogan said Monday. “Now, unfortunately, you are writing history with your bloody hands in these events of seriously disproportionate attacks on Gaza that have caused the martyrdom of hundreds of thousands of people.”

He added, “You forced us to say this because we can’t stay silent on this anymore.”

Lindenstrauss again said such criticism from Ankara would not contribute to ending the violence but instead would further strain relations with the new US administration as well as Israel.

“In previous rounds of violence in Gaza, the criticism coming from Ankara toward Israel, and specifically from Erdogan, crosses at times the line between legitimate criticisms to blood libel anti-Semitic statements,” Lindenstrauss said. “In this respect, lashing out at Israel with such statements makes it less effective criticism than had Turkey voiced more balanced, or at least less inflammatory, rhetoric.”