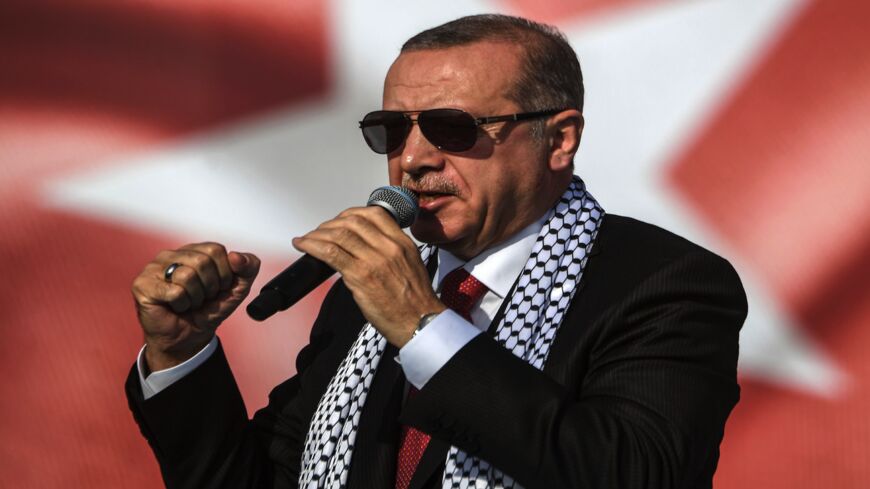 Turkish President Recep Tayyip Erdogan addresses a protest rally in Istanbul on May 18, 2018, against the recent killings of Palestinian protesters on the Gaza-Israel border and the US Embassy move to Jerusalem. - OZAN KOSE/AFP via Getty Images

Bad news for US-Turkey relations — and maybe worse news for the Turkish economy.

… to worse. And now Turkish President Recep Tayyip Erdogan has accused US President Joe Biden of "writing history with your bloody hands" because of US support for Israel, in the context of an emotional diatribe on behalf of the Palestinians. On Monday, Erdogan said in a televised speech that a “Jewish prime minister” had told him he took “greatest pleasure” to kill Palestinians when the unnamed official was a general in the Israel Defense Forces. “This is part of their (Israelis) nature" and “they are only satisfied by sucking blood." The US State Department called out Erdogan for "anti-semitic" and "incendiary" remarks. Erdogan’s communication director Fahrettin Altun shot back on Twitter that “enabling an apartheid regime in its repression of innocent people in occupied territories and then turning around and blaming others who call it out is the height of hypocrisy." Diego Cupolo has the report here. These comments could also serve to increase anxiety in Turkey’s Jewish community, as Amberin Zaman reports below.

Economy ‘most vulnerable’. Meanwhile, a Wells Fargo survey of troubled economies lists Turkey as the most vulnerable in the world, as reported by Emerging Markets. "Turkey’s embattled currency appears on course to tumble further in the coming months," Mustafa Sonmez reports, "as external headwinds threaten to aggravate the country’s entangled economic woes."

Our take. Turkey’s collapsing economy and skyrocketing debt put it in the high-risk company of Argentina and Venezuela, according to the Wells Fargo report. Tight monetary policies are the conventional course, "but that hardly suits Erdogan’s political calculations," adds Sonmez. Turkey’s faltering economy should encourage a rethink in bitter US-Turkey ties, but those relations seem to be sinking with the lira.

Although the Gaza Strip is the primary venue of Hamas’ current clash with Israel, the militants claim their rocket barrage is “defending all Palestinians living in historical Palestine,” including Jerusalem.

That’s according to Hamas’ representative in Iran, Khaled al-Qaddumi, who tells Ali Hashem in an exclusive interview that the rockets aimed at the holy city represent a strategic shift for the group. “For the first time we have an uprising in Jerusalem, among Palestinians who are living in 1948 areas (within Israel’s borders), in the West Bank, and rockets are being launched from Gaza.”

The militants have amassed thousands of rockets despite a yearslong blockade maintained by Israel. Qaddumi partially credits Tehran’s production know-how, which “has helped a lot in transferring knowledge and expertise on one side and transporting the rockets on another.”

Bennett seemingly failed to appreciate just how much the Israeli right opposed his dealmaking with the centrist Yesh Atid and Arab Ra’am parties, Mazal Mualem writes. “Bennett must have realized that images of synagogues being torched by Arab rioters were too much for his base,” Mualem writes. Now, it’s increasingly looking like Israel is headed for a fifth round of elections.

Afif Abu Much has more on the Jewish-Arab violence gripping Israel’s mixed cities, which prompted Israel to send in reinforcements from its internal security service, the Shin Bet.

A team of Gaza-based contributors for Al-Monitor is documenting the chaotic scenes unfolding in their neighborhoods. Check out their harrowing reports below:

“Turkey’s Jews are on edge,” writes Amberin Zaman, after the website of the sole newspaper serving the country’s dwindling Jewish minority was hacked by followers of a well-known anti-Semite.

As the death toll from Israel’s operation in Gaza mounts, so does anti-Israeli coverage in Turkish media where “sympathy for the Palestinians runs strong in Turkey and cuts across ideological lines.” Contempt for Israel has risen under the nearly two-decade rule of the Justice and Development Party (AKP), leaving Turkey’s 14,000 Jews caught in the middle.

Thousands of foreign fighters and mercenaries remain in Libya, despite a cease-fire agreement calling for their departure.

Mustafa Fetouri explains why their presence threatens prospects for a political transition in Libya and could derail plans for nationwide elections in December.

With no agreement on how to boot the foreign fighters, all eyes are on rival powers Turkey and Russia, whose legions of mercenaries fought on opposite sides of the civil war. The Turkish ambassador in Washington suggested in a recent Al-Monitor podcast that Ankara is in no hurry to pull its foreign fighters from Libya.

What we’re listening to: Al-Monitor podcasts break down Israel-Gaza conflict

This week, Andrew spoke with the Center for Strategic and International Studies’ Jon Alterman about the lessons that can be drawn from previous rounds of Israel-Hamas violence. Alterman argues that limited wars won’t resolve the underlying problems, nor will the recent normalization accords between Israel and Arab states.