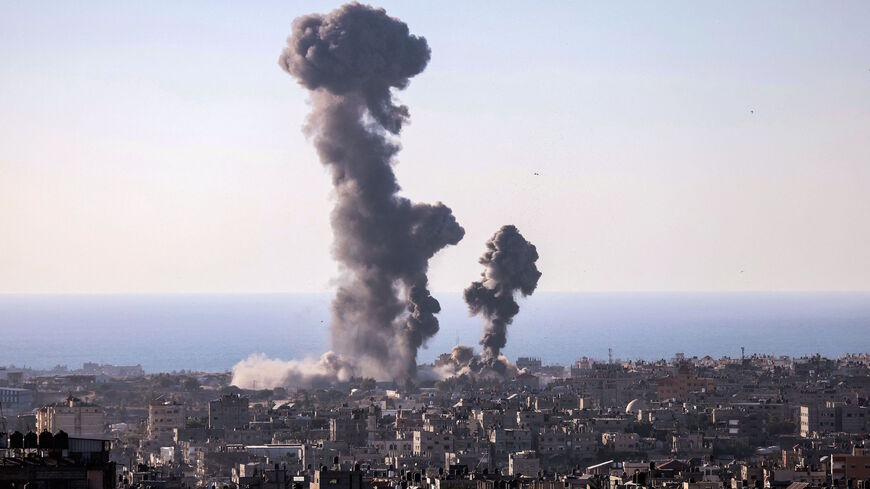 Smoke billows following an Israeli air strike in Rafah in the southern Gaza Strip on May 13, 2021. - SAID KHATIB/AFP via Getty Images

The Joe Biden administration has sent Hady Amr, the deputy assistant secretary of state for Israel and Palestinian affairs, to the region in an effort to de-escalate what’s become the deadliest fighting between Hamas and Israel since the 2014 war. Here's what you should know about Amr, the most senior State Department official tasked with managing the Israeli-Palestinian conflict.

His background. Amr brings to the table years of experience working on Israeli-Palestinian negotiations during the Barack Obama administration. From 2013 to 2017, he was deputy special envoy for the negotiations, with a focus on Gaza and economics. Before that, he served as the deputy assistant administrator in USAID’s Middle East bureau, where he worked on the US aid agency's response to the Arab Spring.

In 2006, he joined the Brookings Institution and became the founding director of the think tank's Doha Center in Qatar. Born in Lebanon and raised in the United States, Amr has also advised international organizations like the World Bank and World Economic Forum.

His significance. Biden's priorities so far have been on the US domestic front and in the Middle East, the focus has been Iran, not the Palestinian-Israeli conflict. Unlike some of his predecessors, Biden hasn't appointed a special envoy to quarterback the peace process. Biden also has yet to name a US ambassador to Israel, although White House Press Secretary Jen Psaki said Wednesday to expect an announcement “over the coming weeks.”

The State Department has pushed back on the criticism, pointing to a flurry of calls between senior US officials and regional counterparts, including separate calls by both Biden and Secretary of State Antony Blinken with Israeli Prime Minister Benjamin Netanyahu.

“We are deeply engaged across the board,” Blinken told reporters on Wednesday, adding that Amr “will bring to bear his decades of experience, and in particular, he will urge on my behalf and on behalf of President Biden a de-escalation of violence.”

His mission. Amr's trip — his first as a Biden administration official — comes as casualties mount from Israel’s punishing bombing campaign and indiscriminate rocket attacks launched by Palestinian militants in the Hamas-run Gaza Strip. The UN Middle East envoy has warned the two sides are hurtling toward a “full-scale war.”

In response, the Biden administration has said Israel has a right to self-defense but that the Palestinians “deserve to live with security and safety.” That rhetoric has failed to satisfy Republicans who want Biden to show more solidarity with Israel, in part by ending nuclear negotiations with Iran.

Biden’s approach has also frustrated progressive Democrats who want the president to come down harder on Israel for its planned evictions of Palestinians in east Jerusalem and what they see as a disproportionate Israeli military response that’s left dozens dead in Gaza, including children.

“He was undermined before he ever made his plane reservation,” said Zaha Hassan, a human rights lawyer and visiting fellow at the Carnegie Endowment for International Peace.

Hassan described Amr as a known quantity who is seen in the region as fair, but it’s unclear what he can achieve with the Palestinians given the administration’s current messaging on Israel's right to defend itself.

“The message as Deputy Assistant Secretary Hady Amr comes to the region is that the US has already chosen who it’s supporting in this and has already given the green light for the continued bombing of Gaza,” she said.

Amr arrives in the region amid mounting calls for a cease-fire between Israel and Hamas. But there’s only so much the US envoy can do to broker peace, given that Washington considers Hamas a terrorist group with which it doesn’t directly communicate.

Ilan Goldenberg, who worked on Israeli-Palestinian issues in the Obama administration, tweeted, “The key mediators in this conflict and the ones with real leverage with Hamas and a close relationship with the Israelis are the Egyptians. Ultimately this round of violence will most likely end with an agreement in Cairo.”

The Associated Press reported Thursday that a delegation of Egyptian officials had arrived in Tel Aviv for talks with the Israeli side, having first met with Hamas officials in Gaza.