Critics of Israel say the planned evictions in the East Jerusalem neighborhood discriminate against Palestinians. 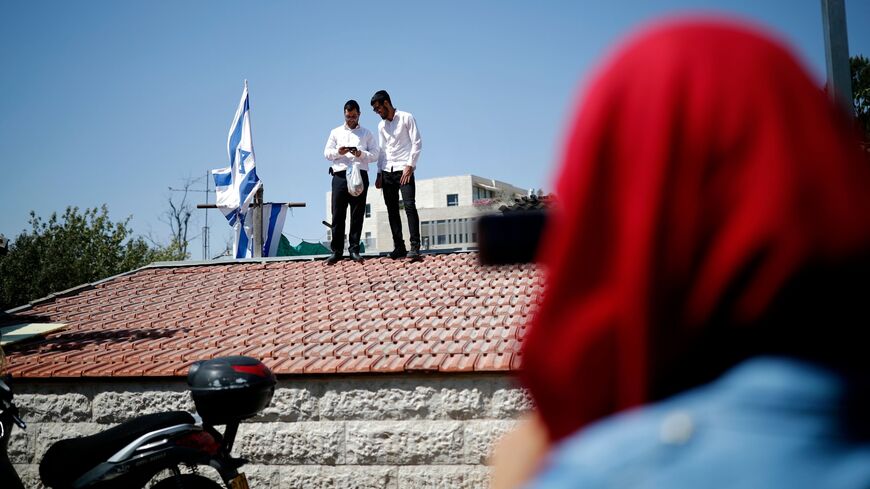 Religious Jewish men stand on the roof of a house seized by new Jewish owners in the Arab neighborhood of Sheikh Jarrah in East Jerusalem on Sept. 8, 2017. The Palestinian Shamasneh family lived in the home for over half a century until it was evicted Sept. 5, 2017. The family fought a court battle for years against Jewish claimants who said the land was their family property, which they fled when East Jerusalem was occupied by Jordanian troops in the 1948 war that led to the creation of the Jewish state. - THOMAS COEX/AFP via Getty Images

The ongoing unrest across Israel can be explained in part by the planned evictions of dozens of Palestinian families from an East Jerusalem neighborhood they’ve called home for decades. Here’s how Sheikh Jarrah became a major driver of the current Israeli-Palestinian crisis.

Who lives in Sheikh Jarrah?

Located north of Jerusalem's Old City, the predominantly Palestinian neighborhood is named after the personal physician of Saladin, the Muslim general who captured Jerusalem from the Crusaders.

Today, Sheikh Jarrah is home to generations of Palestinian families. The 1948 war that established the state of Israel displaced hundreds of thousands of Palestinians, many of whom fled to territory that was then controlled by Jordan. In 1956, 28 refugee families moved into Sheikh Jarrah with the support of Jordan and UNRWA, the UN agency for Palestinian refugees.

But in 1967, Israel captured Sheikh Jarrah, along with the rest of East Jerusalem, and then annexed what is considered occupied territory by much of the international community. The Palestinians envision Jerusalem as part of their future state.

Who does the land belong to?

Under a 1970 Israeli law, Jewish property owners and their heirs can reclaim land if they can prove they had ownership prior to 1948. The Palestinians do not have that same right.

In the decades since the property law was passed, pro-Jewish settler groups, including the US-based Nahalat Shimon organization, have launched a wave of lawsuits seeking to reclaim land in Sheikh Jarrah. The UN estimates roughly 1,000 Palestinians across East Jerusalem — nearly half of them children — are at risk of eviction. The left-leaning Israel-based rights group Ir Amim says 70 of those families are from Sheikh Jarrah.

Palestinian residents say Israeli settlers have stoked tensions in the city. In a video that made the rounds on social media, an apparent settler is heard telling a Palestinian woman, “If I don’t steal your home, someone else will steal it.”

This doesn't describe the Israeli occupier's logic only; it also describes the rudeness of those who support the Israeli colonial policies of expropriating the Palestinian occupied lands. pic.twitter.com/OSB0QejwCT

In an effort to reduce tensions, Israel’s Supreme Court delayed a Monday appeal hearing that is to determine whether four Palestinian families at imminent risk of eviction could stay in their homes. Israel’s attorney general, Avichai Mandelblit, was given an additional 30 days to review the case.

Rights groups say what’s happening in Sheikh Jarrah is emblematic of Israeli land practices that discriminate against Palestinians. The United Nations warned Israel last week that the transfer of Palestinians is “prohibited under international humanitarian law and may amount to a war crime.”

The Israeli government sees it differently. In a statement, the Foreign Ministry described the legal battle as merely “a real estate dispute between private parties” and accused the Palestinian Authority as using it “as a nationalistic cause, in order to incite violence in Jerusalem.”

US officials have expressed concern over the possible evictions, but progressive Democrats have called for the administration to issue a more forceful condemnation.

"For decades, we have paid lip service to a Palestinian state, while land seizures, settlement expansion, and forced displacement continue, making a future home for Palestinians more and more out of reach,” Democratic Reps. Ilhan Omar of Minnesota, Andre Carson of Indiana and Rashida Tlaib of Michigan said in a statement Monday.

We stand in solidarity with the Palestinian residents of Sheikh Jarrah in East Jerusalem. Israeli forces are forcing families from their homes during Ramadan and inflicting violence.

It is inhumane and the US must show leadership in safeguarding the human rights of Palestinians.

How did Sheikh Jarrah become a flashpoint?

Sheikh Jarrah is about a mile away from the Al-Aqsa Mosque, where Palestinians say Israel imposed unnecessary restrictions on their gatherings during the holy month of Ramadan. Protesters in Jerusalem’s Old City also began marching in solidarity with the Palestinians who for weeks have been staging sit-ins and demonstrations over the pending evictions in Sheikh Jarrah.

Tensions boiled over Monday when Israeli police stormed the Al-Aqsa Mosque, using stun grenades and rubber bullets against Palestinians they said were throwing stones. Hundreds were left wounded at Islam’s third holiest site, according to the Palestinian Red Crescent.

In recent days, the militant group Hamas has responded by firing a barrage of rockets into Israel from the Gaza Strip, prompting retaliatory airstrikes from Israel. As of Thursday, 103 people have died in Gaza and seven people in Israel, according to officials on both sides.