Several Democrats in the House and Senate want the Biden administration to pressure Israel over the possible eviction of Palestinian families from their homes in Jerusalem, but other Democratic and Republican lawmakers expressed support for Israel after Hamas' rocket attacks. 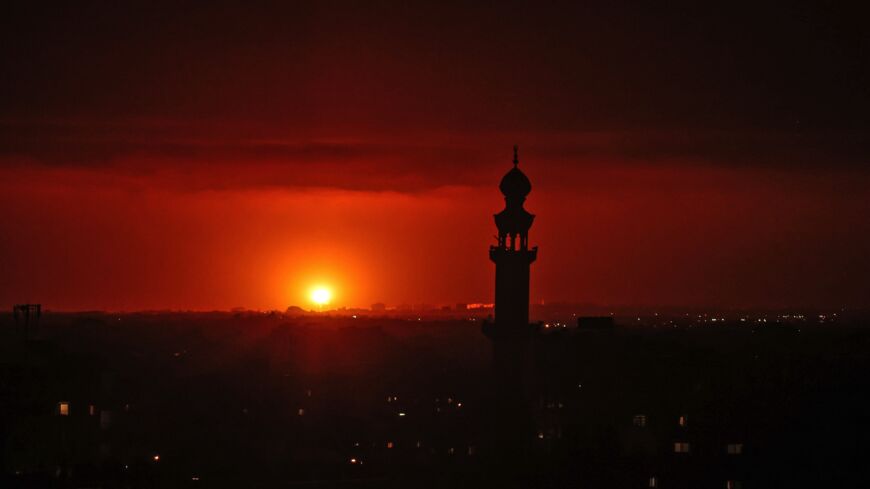 A picture shows an Israeli airstrike in the southern Gaza Strip, controlled by the Palestinian Islamist movement Hamas, on May 10, 2021. Israel launched deadly airstrikes on Gaza in response to a barrage of rockets fired by the Islamist movement Hamas amid spiraling violence sparked by unrest at Jerusalem's Al-Aqsa Mosque compound. - SAID KHATIB/AFP via Getty Images

Several Democrats in Congress have criticized Israel over the ongoing violence occurring between Israelis and Palestinians in the country. Israel has responded to some of the criticism, and other Democratic and Republican lawmakers have conversely defended Israel.

“The forced removal of long-time Palestinian residents in Sheikh Jarrah is abhorrent and unacceptable. The administration should make clear to the Israeli government that these evictions are illegal and must stop immediately,” said Warren in a tweet appealing to US President Joe Biden on Saturday.

Sen. Chris Van Hollen of Maryland said that evicting the Palestinian families would violate international law in a Saturday tweet, citing a United Nations statement on the issue. He also said the Biden administration should speak more forcefully on the matter.

“If the Biden administration puts the rule of law and human rights at the heart of its foreign policy, this is not a moment for tepid statements,” he said.

“I was 7 years old when I first prayed at Al Aqsa with my [grandmother]. It's a sacred site for Muslims. This is equivalent to attacking the Church of the Holy Sepulchre for Christians, or the Temple Mount for Jews,” she said on Twitter on Monday.

Israel’s ambassador to the United Nations, Gilad Erdan, responded to Tlaib by tweeting a picture he claimed showed stones being stored inside the holy site. Some Palestinians have thrown stones at Israeli police amid the violence.

"Congresswoman, instead of calling for peace and calm, your tweets are the stoking tensions,” he said on Monday. “Maybe you don't realize that your words encourage terror groups such as Hamas to fire rockets into civilian populations and carry out attacks against Jews.”

Other Democrats defended Israel, including the head of the House Foreign Affairs Committee. Rep. Gregory Meeks of New York condemned the Palestinian group Hamas for launching rockets into Israel on Monday.

“Hamas' attacks into Israel are terrorism, plain and simple. It must stop immediately,” he said in a statement put out by the committee.

Some Republicans also took Israel’s side. Sen. Marco Rubio of Florida put out a statement Monday on the social media site criticizing Hamas and Iran, which supports the Palestinian group.

“Palestinian terrorists in #Gaza have launched rockets targeting Israeli cities, including the capital #Jerusalem," he said. “We should remember that #Hamas is backed by #Iran who continues to provide assistance to terrorists that attack our democratic ally.”

Warren, Van Hollen and Cortez were referring to several Palestinian families fighting eviction in Sheikh Jarrah, which has coincided with violent protests involving Israeli and Palestinian residents of the city as well as Israeli police. A group of Israelis claim the properties in question, saying they were purchased by Jewish communities before the establishment of the State of Israel and that the Jewish property owners were forced to flee in 1948 during the first Arab-Israeli war. Many of the Palestinians moved to the properties in the 1950s when East Jerusalem was under Jordanian control after being displaced by the war. The involved Israelis claim the Palestinian residents were never made the legal owners by Jordanian authorities. Israel’s High Court plans to reconvene on the issue this week.

The present conflict is not only on Sheikh Jarrah. Tlaib referenced the longstanding tension between Jews and Muslims over the holy sites on the Temple Mount in Jerusalem’s Old City. Rubio and Meeks commented on the recent rocket fire from Gaza into Israel.

Hamas also fired several rockets toward Jerusalem and southern Israel, and the Israel Defense Forces launched strikes on Gaza in response. Monday night local time, the Palestinian Authority reported that 20 people died as a result of an Israeli airstrike in Gaza.

The Biden administration has called for calm and refrained from criticizing Israel outright so far, despite the pressure from Congress. US national security adviser Jake Sullivan “encouraged the Israeli government to pursue appropriate measures to ensure calm during Jerusalem Day commemorations” in a Sunday phone call with Israeli officials ahead of today’s Jerusalem Day holiday in Israel. He also denounced Hamas’ rocket fire and reiterated the administration’s “commitment to Israel’s security.”

Several pro-Palestine organizations are planning a protest outside the State Department’s headquarters in Washington on Tuesday.