Are Palestinians gaining in court of world opinion?

Independent observers have noticed a marked difference in public attitudes around the world and especially in the United States regarding the latest violent escalation in Palestine and Israel, changes connected to timing, messaging and the platforms carrying those messages. 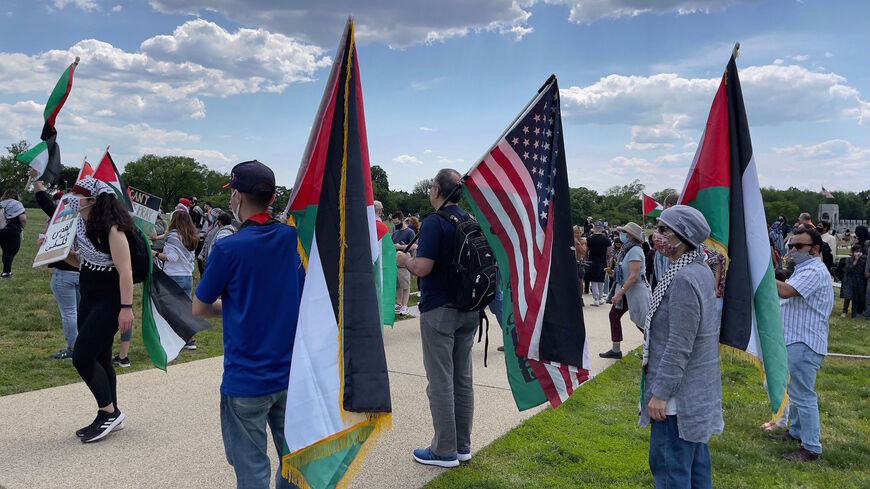 Demonstrators take part in a protest in solidarity with the Palestinians over the ongoing conflict with Israel, in Washington, May 15, 2021. - DANIEL SLIM/AFP via Getty Images

The duality of Israeli shelling and Gazan rockets against Israel are not new. But there is widespread acknowledgment that things are different this time around. Support for Palestinian national aspirations has spiked at unprecedented levels while criticism of Israel has also increased.

It seems that the timing, the message and the platforms communicating the messages have changed in a substantial way for this round of escalations.

In the United States, progressives such as Vermont Sen. Bernie Sanders, New York Rep. Alexandria Ocasio-Cortez, Palestinian American Rep. Rashida Tlaib of Michigan and others have insisted the progressives this time should not exclude support for Palestinians.

The timing also appears to have favored the Palestinians; many people around the world, tired of the stay-at-home orders due to the pandemic, used the opportunity of a call to protest to go out and reconnect with friends in public spaces.

In the Palestinian case, the timing of the escalation was important. Protests had begun almost a month before the rockets and the shelling started. People around the world saw and followed the protests against the planned eviction of Palestinians from Jerusalem's Sheikh Jarrah neighborhood and how Palestinians were defending themselves against this forced removal by the Israelis. Viewers saw how Israeli security forces in Jerusalem repeatedly protected right-wing settlers calling for death to Arabs and attempted to remove worshippers from the Al-Aqsa Mosque. People saw how a group of Jewish extremists marched provocatively in the Old City, waving Israeli flags and harassing the local Palestinian community.

The message of unarmed underdog Palestinians protesting the heavy-handed and well-armed Israelis fed into the psyche of those inclined to back the weak standing up to a bullying power.

One more possible incidental issue when it comes to timing was the April 27 release of a 213-page report by Human Rights Watch accusing Israel of committing the crime of apartheid. The report, similar to an earlier one by the Israeli human rights organization B’tselem, treats Israel as a single body responsible for discrimination against Palestinians, whether in the occupied territories or in Israel proper.

One more aspect of the messaging has been the attitude of the world and nearly half of Israelis regarding a single person: Benjamin Netanyahu. Accused of multiple cases of corruption, the Israeli prime minister has become the representation of a state leader who is doing everything he can simply to stay in power.

Anti-Netanyahu sentiment along with images of children being shelled and entire high-rise buildings coming down make it easy to understand why the world might favor Palestinians in this round.

But while the timing and the message are very important, the strongest reason for the clear shift of public opinion, including in the United States, has to be credited to digital media. During the entire month of Ramadan, hard-handed Israeli measures against Palestinians were recorded and distributed widely using various social media accounts. The extremist Israeli anti-Arab march of April reportedly took place because of a TikTok video that shows an Orthodox Jewish man being beaten up by Palestinians, even though other Palestinians extracted the man and let him go. But it was mostly the videos shot and distributed by Palestinians of Israeli attacks and heavy-handed harassment against Palestinians in Jerusalem, including worshippers in Islam’s third holiest mosque, Al-Aqsa Mosque, that appears to have moved many young people around the world.

While some of the tech giants were reported as having tried to delete many pro-Palestinian accounts, this practice appears to have stopped once a campaign began against platforms such as Facebook over the matter. This campaign and other pressure from progressives resulted in an unprecedented apology by Facebook and Facebook's Instagram that accounts had been suspended in error.

Unlike the usual news cycle where the major media outlets are the news agenda setters, this time around digital media, especially those promoted by celebrities and social media influencers, were more the driving force behind the way corporate media treated the news from Jerusalem, Gaza, Tel Aviv and other places. Celebrities, public protests that saw tens of thousands in major Western cities participate and the role of progressives forced the media — albeit belatedly — to get involved both in coverage and to take a much tougher position while intervening with Israeli officials and representatives.

The conflict for the independence of Palestine is a century-old one but the issues around Jerusalem and the holy places have a way of reigniting passion and solidarity that has not been seen before. The timing, messaging and the platforms disseminating these messages have had a strong influence on public opinion and major decision-makers around the world.