Sanders' move will force a vote in the Senate on whether or not to block the arms sale. 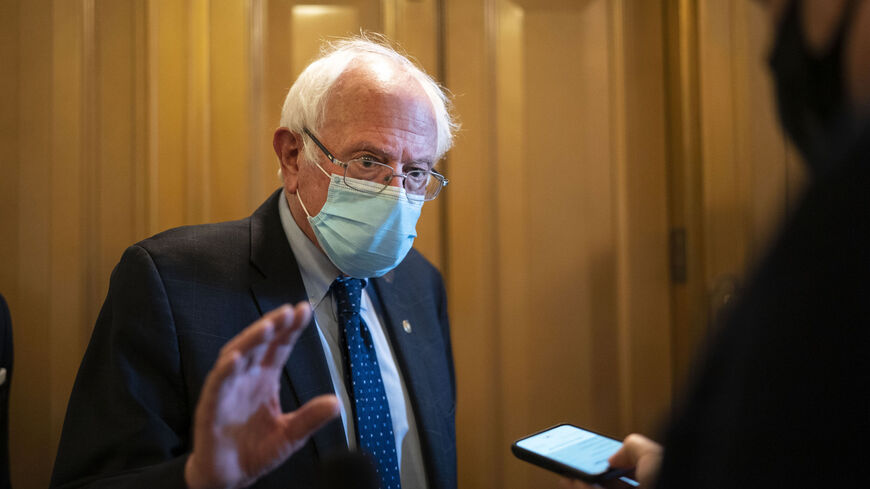 Vermont Sen. Bernie Sanders speaks to reporters following a procedural vote on the nomination of Polly Ellen Trottenberg to be deputy secretary of transportation at the US Capitol on April 12, 2021, in Washington. - Drew Angerer/Getty Images

US Sen. Bernie Sanders, I-Vt., introduced a resolution Thursday that will force the Senate to vote on whether or not to block a controversial $735 million sale of bombs and bomb guidance equipment to Israel. The move came shortly before Israel announced it had reached a cease-fire with Hamas, set to begin at 2 a.m. Friday.

The move marks an unprecedented challenge by lawmakers to US aid to Israel in recent decades, a subject that has become increasingly controversial in progressive circles in US politics.

But the resolution faces significant hurdles in the upper chamber and, if it were to pass the Senate, would likely fail to meet the required two-thirds override vote if vetoed by President Joe Biden,

Sanders’ move comes after a group of progressive Democrats in the House raised a last-minute resolution opposing the sale, first reported by Al-Monitor.

Democratic Reps. Alexandria Ocasio-Cortez of New York, Mark Pocan of Wisconsin, Rashida Tlaib of Michigan, Ilhan Omar of Minnesota and others raised the resolution after the head of the House Foreign Affairs Committee, Rep. Gregory Meeks, D-N.Y., backed away from a plan Wednesday to petition the Biden administration to delay the sale.

“The United States should be prioritizing humanitarian aid and upholding human rights, not rushing through arms sales that could fuel further violence,” the progressive lawmakers said in a statement.

The Biden administration notified Congress of the sale May 5, almost a week before Hamas and the Islamic Jihad started launching rockets into Israel, kicking off the latest conflict. But the administration did not publicly announce the deal, in line with policy on direct-licensing transfers, a US official said.

The proposal is for a license for Boeing to sell small-diameter bombs and JDAM guidance kits, which have reportedly been used in Israel’s unrelenting strikes in the Gaza Strip.

Lawmakers do not have to approve the move for it to take effect, but have 15 days to raise an objection to it. Sanders just met the deadline.

Palestinian health authorities said more than 230 people had been killed in the densely populated Gaza Strip since fighting began May 10. Militant groups have sent thousands of “dumb” rockets deep into Israeli territory with no precautions against hitting Israeli civilians; 12 Israelis have been killed.

Biden told Israeli Prime Minister Benjamin Netanyahu on Wednesday that he expected to see a de-escalation in the fighting the same day. Netanyahu reportedly replied noncommittally. On Thursday evening, Netanyahu's office released a statement saying the country's Security Cabinet had voted to approve a "mutual and unconditional" cease-fire.

Official statements suggest Biden had resisted rising calls from Democrats to pressure Netanyahu for an immediate cease-fire to the conflict, though transcript of their calls have not been made public.