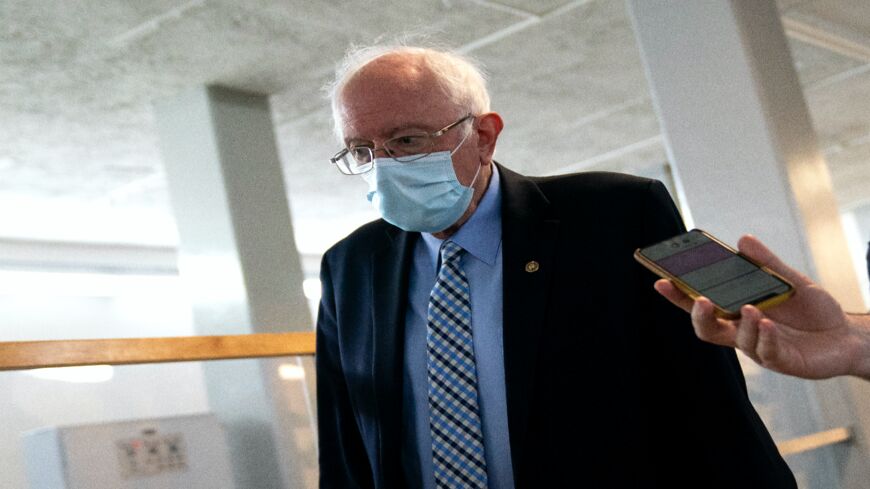 US Sen. Bernie Sanders (I-VT) speaks to members of the media in the Senate Subway on April 29, 2021, in Washington, DC. - Stefani Reynolds/Getty Images

US Senator Bernie Sanders (I-VT) has dropped an effort to block a $735 million sale of precision-guided bombs to Israel amid procedural obstacles.

Sanders’ last-minute objection to the weapons sale last week would have forced the Senate to vote on whether to block it in light of the latest lopsided conflict between Israel and Palestinian militants in the Gaza Strip.

Sanders moved to introduce a Joint Resolution of Disapproval last Thursday after a similar objection was raised by a group of progressive Democrats in the House. At the time, Israeli airstrikes were pounding civilian and militant infrastructure in Gaza, ultimately killing more than 240 Palestinians, as Hamas rockets continued to stream into Israeli skies.

Congress’ window to oppose the arms transfer was set to close just one day later, on Friday. The conflict was halted just hours later as a cease-fire negotiated by Egypt was accepted by the warring sides.

A person familiar with the matter told Al-Monitor that Sanders dropped the resolution after lack of clarity over whether it would still be valid within the timeline set by the 15-day window for Congress to raise objections to proposed arms sales. Congress has only 10 days to block sales to US allies.

Lawmakers were formally notified of the sale, which includes small-diameter bombs and JDAM guidance kits, on May 5, nearly a week before the latest Israel-Hamas conflict. It faced little enthusiasm in the Senate, where pro-Israel Democrats hold greater sway than in the House, where progressives have mounted a rising challenge to blanket US support for Israel amid mounting human rights concerns.

A vote to approve the resolution in the Senate would have required a majority, but if vetoed by President Joe Biden, would require two-thirds of the chamber for an override.

Sanders also dropped his opposition to the confirmation of State Department nominees after he spoke with Deputy Secretary of State Wendy Sherman about the Biden administration’s plans to help rebuild Gaza, The Hill reported.

Sanders had placed a freeze on all pending State Department nominees on Friday after learning that the department had approved the Boeing sale license, according to a report in Jewish Currents.