Israeli Defense Minister Benny Gantz has ruled out a cease-fire for now. 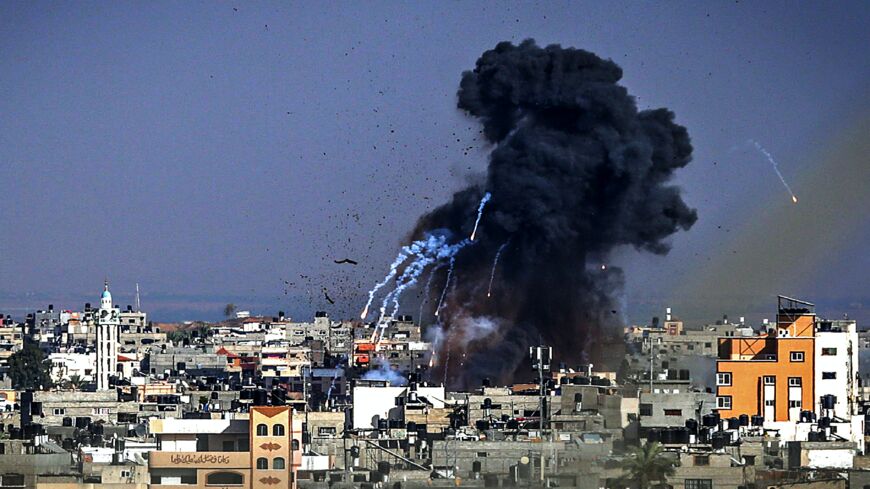 Smoke billows from Israeli airstrikes in Gaza City, controlled by the Palestinian Hamas movement, on May 11, 2021. - ANAS BABA/AFP via Getty Images

A senior Hamas political official said the group is willing to halt its attacks on Israel if Israel does the same for Gaza, Russia’s Foreign Ministry said on Wednesday.

Marzouk also conditioned Hamas’ willingness to end the hostilities on Israel’s cessation of “unlawful measures against its indigenous Arab inhabitants.” The call was requested by the Palestinian side, the statement read. The discussion was first reported by The Times of Israel.

Israel’s Defense Minister Benny Gantz said Wednesday that “Israel is not preparing for a cease-fire” and that there is no end in sight for the continued strikes on Hamas and Palestinian Islamic Jihad (PIJ) targets in Gaza.

“Only when we achieve complete quiet can we talk about calm. We will not listen to moral preaching against our duty to protect the citizens of Israel,” Gantz said.

Earlier on Wednesday Gantz received a phone call from US Defense Secretary Lloyd Austin, who pledged Washington’s “iron-clad support for Israel’s legitimate right to defend itself and its people.”

Fifty-six Palestinians, including 14 children, have been killed so far amid Israeli strikes on Gaza, which began Monday in retaliation for rocket attacks into Israel by Hamas and the PIJ. Seven Israelis, including one child, have been killed, according to local authorities.

The United States on Wednesday dispatched envoy Hady Amr to meet with and urge Palestinian and Israeli officials to de-escalate the emerging conflict. The Biden administration has reached out to Egypt for help decelerating the fighting.

Rioting erupted in a number of mixed Arab-Israeli cities in Israel on Wednesday. A mob of Israelis severely beat a person whom they apparently believed was an Arab man in Bat Yam, a Tel Aviv suburb. The Times of Israel also reported a Jewish man in Acre was injured in the head after being pelted with rocks by rioters.

Israel’s Channel 12 News reported that Prime Minister Benjamin Netanyahu has pushed for the deployment of Israel’s military inside cities experiencing unrest but that Defense Minister Benny Gantz opposes the idea.