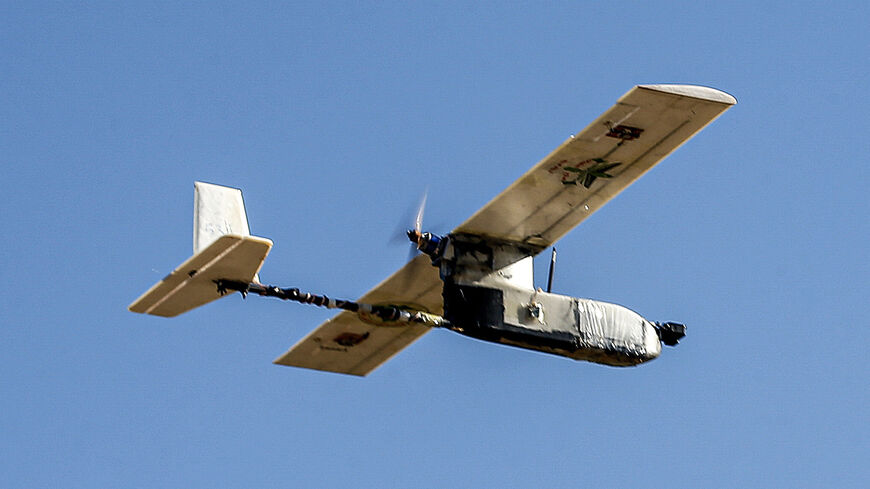 This picture taken on Dec. 29, 2020, shows a view of an unmanned aerial vehicle of the Palestinian Islamist movement Hamas flying above Gaza City during military drills by Hamas and other Palestinian armed factions. - MAHMUD HAMS/AFP via Getty Images

An Israeli fighter aircraft shot down an explosive-laden drone launched from the Gaza Strip on Thursday, Israel’s air force said.

Video released by the Israeli military shows an F-16 targeting the drone before knocking it out with a missile. The so-called “suicide drone” was carrying roughly 11 pounds (five kilograms) of explosives, the military said.

The propeller-driven craft closely resembles Iran’s Ababil-T drone, a variant of which has also turned up in the hands of Yemen’s Houthi rebels for use against Saudi Arabia.

While the origin of the Hamas drones revealed yesterday remains unclear, the Ababil has been widely exported in the region by Iran. A variant of the drone was used by Hezbollah against Israeli forces in Lebanon during the 2006 war. Hamas previously displayed an Ababil drone during a 2014 parade in Gaza, the Israel Defense Forces said at the time.

Israel’s air force retaliated yesterday for the drone launches by bombing what it called the “operational apartment” of Hamas’ head of drone operations, Samer Abu Daka, in the area of Khan Younis in the southern Gaza Strip. Abu Daka’s residence was previously targeted in 2014 during the Israel-Gaza war, dubbed Operation Protective Edge by the IDF.

At least 83 Palestinians have been killed in the conflict since rockets were launched from the Gaza Strip on Monday in response to a flashpoint raid by Israeli police on the Al-Aqsa compound in Jerusalem. At least seven Israelis have been also killed.

Hamas and Palestinian Islamic Jihad (PIJ) have launched at least 1,600 rockets targeting Israel since Monday, Israeli officials say, though roughly a quarter of those did not make it across the Gaza border.

Hamas offered a conditional truce yesterday, but it was rejected by Prime Minister Benjamin Netanyahu’s government.

The IDF said it has struck over 600 Hamas and PIJ targets in Gaza and killed several Palestinian officials since fighting broke out earlier this week, including the PIJ’s head of rocket operations. Hamas has vowed retaliation for the killings yesterday.

Israeli forces amassed near the Gaza border Thursday in preparation to invade the besieged Palestinian enclave.

“We are gathering forces on the Gaza border,” IDF spokesperson Hildai Zilberman told Israel’s Channel 12 News. “They are studying the field and we will use them when we decide to,” he said.

Egyptian intelligence officials traveled to Gaza on Thursday in an effort to de-escalate the fighting. US President Joe Biden dispatched State Department official Hady Amr to speak to both Israeli and Palestinian leaders to urge calm.