Hamas bets on locally made drones for next confrontation with Israel

Hamas’ armed wing has revealed some new information about its drone production, a move that some experts see as a show of force for Israel. 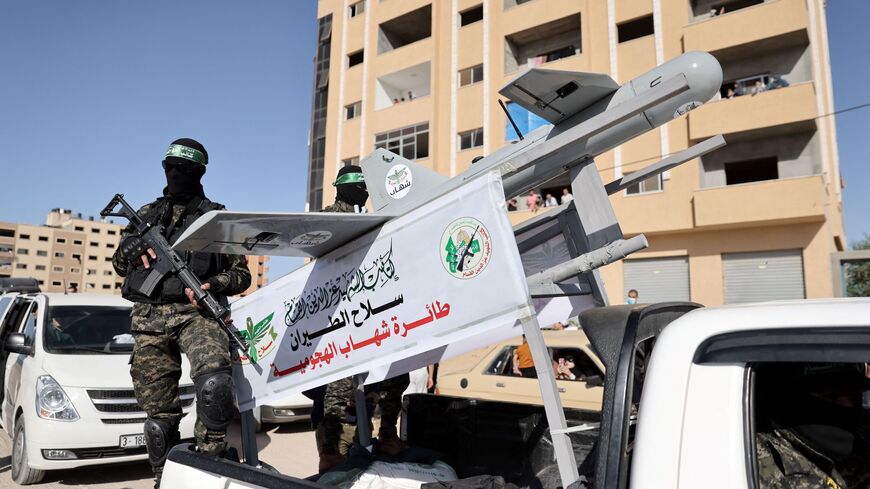 Members of the Ezz-Al Din Al-Qassam Brigades, the armed wing of the Hamas movement, parade on a truck with a drone in Khan Yunis, in the southern Gaza Strip on May 27, 2021. - THOMAS COEX/AFP via Getty Images

GAZA CITY, Gaza Strip — For the first time, in a documentary released on June 11, Hamas’ military wing, the Izz al-Din al-Qassam Brigades, revealed that it possesses a large number of drones, which were manufactured and developed in the Gaza Strip.

The documentary also sheds light on two of Hamas’ most prominent drone engineers, who were assassinated by Israel during the last military aggression on Gaza in May 2021 — Dhafer al-Shawa and Hazem al-Khatib.

In addition to rockets, drones are one the most sought-after weapons for Hamas. Both were heavily used during the last round of violence with Israel.

In a statement to the Israeli Channel 12 on June 12, an Israeli army official said in May 2021, Hamas tried to target the Tamar gas field in southern Israel with a drone before it was detected and destroyed.

On May 13, 2021, Hamas had indeed declared that it targeted the gas field off the shores of Gaza with a number of Shehab suicide drones.

The Shehab drone, built by Hamas, carries an explosive warhead weighing 30 kilograms and can fly up to 250 kilometers. It is also believed that the drone is programmed with GPS coordinates and satellite images to locate its target, and it can be visually directed to the target using a ground operator and a camera.

During the Israeli war on Gaza in 2014, with the help of Iranian and Arab experts, Hamas manufactured its first drone, Ababeel 1, which came in three versions: reconnaissance, bomb-dropping, and suicide bombers.

One of the planes reached the headquarters of the Israeli Defense Ministry in Tel Aviv undetected, escaping the Israeli army’s radars.

A Hamas military official, who declined to be named, told Al-Monitor that over the years, their engineers were able to build a complete system of drones, noting that all were self-manufactured in the Gaza Strip and are developed to be used against the Israeli army.

“The development process is moving in steady steps toward creating drones with higher accuracy in hitting targets, flying long distances, with a more developed communication and control system,” he said.

For its first drone project, Hamas gives credit to Tunisian engineer Mohamed Zouari, who was assassinated on Dec. 15, 2016, in the Tunisian city of Sfax. At the time, Hamas accused the Israeli Mossad of the murder.

The Islamic movement also praised the Iranian expertise in developing its drones and improving their performance and capabilities.

Retired Palestinian Maj. Gen. Yousef al-Sharqawi, a military expert, told Al-Monitor that Hamas is well aware that drones are nowadays weapons, and is doing whatever it takes to use them in any future military offensives.

He believes that Hamas' announcement is a show of force and a message to the Israeli army, which thought it had undercut Hamas’ drone project by assassinating several leading engineers.

Sharqawi added that the drones in the hands of Palestinian factions, notably Hamas and the Islamic Jihad, are still modest in terms of technology. “It takes time to develop the military capabilities of these jets to become more effective, which is what Iran is currently working on,” he said.

Muhammad Abu Harbid, a military and security expert who holds the rank of lieutenant colonel in the Ministry of Interior in Gaza, told Al-Monitor, “Hamas does not want to rely on tunnels or missiles alone in its war with the Israeli army. It is seeking to acquire as many weapons as it can, the latest of which are drones.”

He stressed that Hamas is continuously developing these military aircrafts, much to Israel’s dismay. The latter has been trying to interrupt this project in all means possible.

Abu Harbid added that Hamas has not put all its cards on the table and is counting on the element of surprise in any upcoming battle, “just like what happened in the 2014 war, when it surprised everyone by launching drones toward Israel.”

He explained that Hamas relies heavily on drones, and not only as a military tool. In fact, Hamas was able to spy on the Israel military’s movements by the borders of the Gaza Strip, managing, on several occasions, to down Israeli drones, whether by shooting them or hacking their control system.

In parallel, Israel is trying to limit Hamas' drones by preventing the smuggling of materials, assassinating their developers, or shooting them down with its Iron Dome system. On May 19, 2021, the Israeli army announced that it had shot down a drone in the air in southern Gaza Strip.