Hundreds of thousands of Israelis ran to shelters over the night as sirens blared warnings of rocket fire from the Gaza Strip. 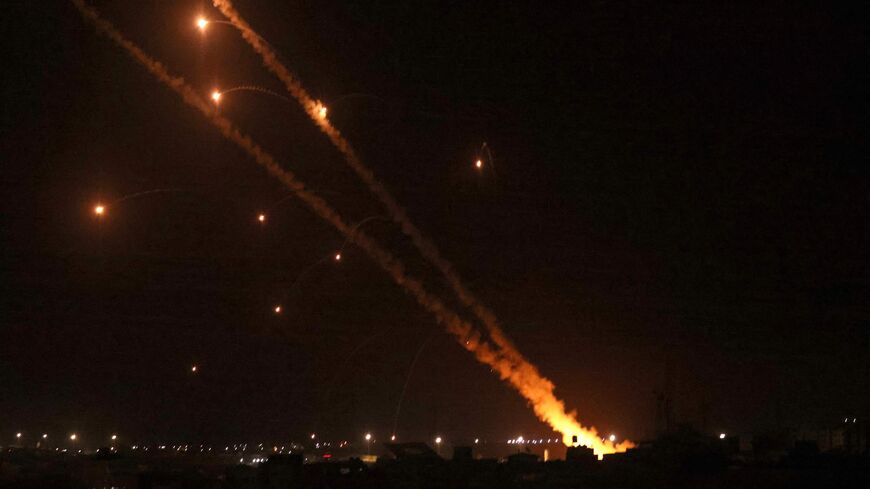 Rockets are launched toward Israel from Rafah, in the southern Gaza Strip, early on May 12, 2021. - SAID KHATIB/AFP via Getty Images

One person was killed this morning and two more injured when a Kornet anti-tank guided missile was fired at an Israeli jeep near the northern Gaza border. The IDF considers the use of the advanced weaponry a new level of escalation. Earlier the IDF had warned residents near the Gaza border to stay home for fear of snipers in the Strip.

The IDF said this morning over 1,050 rockets and mortar shells were fired from Gaza toward Israel since the outbreak of fighting on Monday evening. While 200 failed to reach Israeli territory, landing inside the Strip, some 850 entered Israeli airspace.

Hundreds of thousands of Israelis in the south of Israel, the Jerusalem region, the Tel Aviv region, the central region of the Ben Gurion airport and the Sharon region just north of Tel Aviv spent part of the night in shelters as the sirens warned of imminent rockets. The Iron Dome air defense system reportedly intercepted 85-90% of the projectiles as they headed for populated areas in Israel.

Still, several rockets hit buildings and cars. Five civilians were killed. Khalil Awad, 52, and his daughter Nadin, 16, were killed early this morning in their village of Dahamash, near the town of Lod in the center of Israel. Residents of the village said since its status was never regularized, no public shelters were built there and people simply stayed at home when the sirens sounded. The father and daughter were reportedly eating their early Ramadan breakfast when their home was hit.

Yesterday, two women were killed in the southern town of Ashkelon and another in Rishon Letziyon. Hundreds of people were injured during the night. Nine people were hospitalized in serious condition and about 200 people suffered light injuries or shock.

The IDF instructed schools across the region to close for the day. Several main roads in the south of Israel remain blocked. Israel Railways reduced much of its traffic and canceled all service on the Beersheba-Ashkelon line. In the southern and central regions, people are allowed to go to work only in buildings that have shelters. Gatherings of all sorts are to be kept small. The residents of Ashkelon have been instructed to avoid leaving their homes if possible after a petrol tank was hit there.

The Israeli air force rained strikes on the Gaza Strip throughout the night and morning, aiming at Hamas targets and operatives that are often located in civilian buildings and areas. The IDF tweeted early this morning, "In response to HUNDREDS of rockets in the last 24 hours, the IDF has struck a number of significant terror targets and terror operatives across the Gaza Strip, marking our largest strike since 2014. We are currently striking more terror targets in Gaza." Palestinian media outlets reported that at least 35 people have been killed in the strikes, including 12 children.

This morning, the IDF shot down a drone as it flew from the Gaza Strip into Israeli territory. The IDF reported that three senior Hamas officials were killed as well as two Hamas intelligence operatives and said that after hitting Hamas figures and destroying their homes, it will now target the movement's underground infrastructure.