US pushes for progress on Nile dam talks

The United States is once again trying to help the Nile dam negotiations resume, this time leaning harder on the African Union. 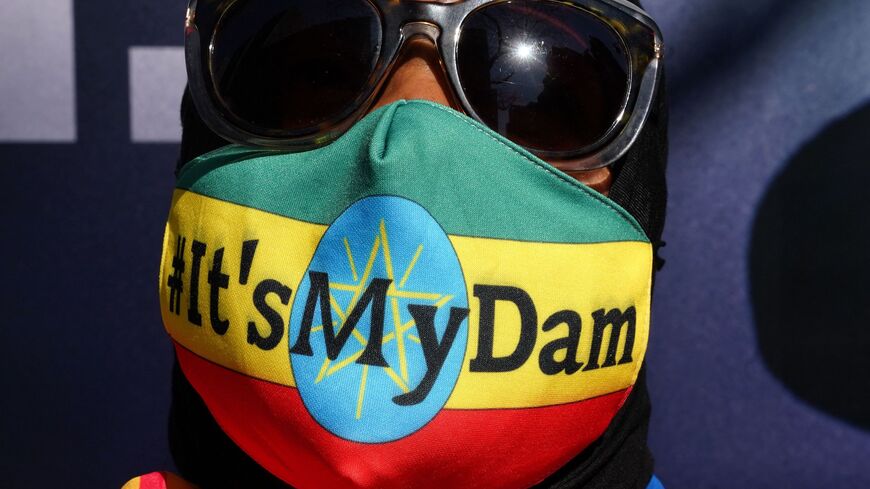 Protesters march down 42nd Street in New York during a "It's my Dam" protest on March 11, 2021, as Ethiopians unite around the Nile River megaproject. - TIMOTHY A. CLARY/AFP via Getty Images

CAIRO — US special envoy for Sudan Donald Booth embarked on a regional tour March 27 to revive the Grand Ethiopian Renaissance Dam (GERD) negotiations between Egypt, Sudan and Ethiopia that have been stalled since January. Washington's last mediation efforts failed in 2020.

Booth's efforts may bear fruit. Congolese officials said April 1 that the foreign ministers of Egypt, Sudan and Ethiopia will meet in Kinshasa on Saturday in an effort to launch a fresh round of talks on the 10-year-old dispute.

Officials added that the anticipated talks, set run into Monday, will be attended by Congolese President Felix Tshisekedi.

Loza stressed the need to “reach an agreement on filling and operating the GERD at the earliest possible opportunity and before Ethiopia begins implementing the second-phase filling, in order to ensure that Egypt and Sudan are not negatively affected by the process.”

On the next day, March 28, Booth was accompanied by EU envoy Marina Fraila in a meeting with Egyptian Minister of Irrigation Mohamed Abdel Ati, who stressed the need for “the negotiations to be effective and serious to maximize the chances of their success,” according to a statement by the ministry.

Abbas Sharaqi, a professor of geology and water resources at Cairo University, told Al-Monitor that Egypt needs the United States to quickly intervene to push forward with the GERD negotiations before the second filling scheduled for July.

“We are running out of time. We only have a few months to resolve the negotiations,” he added.

On March 29 Booth headed to Khartoum, where he and European envoy Robert Vandall met with the head of Sudan’s Sovereign Council, Lt. Gen. Abdel Fattah al-Burhan. A statement by the council read, “The two envoys noted their readiness to mediate in the GERD issue and reiterated their belief in the necessity of reaching a diplomatic solution based on an approach that satisfies the three parties, which guarantees that Ethiopia would have access to electricity, Sudan would protect its territorial integrity and secure its dams and Egypt would have its water rights.”

On March 31, Booth flew to Addis Ababa and met with Ethiopian Deputy Prime Minister Demeke Mekonnen Hassen, who said that his country is looking forward to continuing the talks led by the Africa Union.

The three countries have been locked in arduous negotiations for a decade to reach a legally binding agreement on filling and operating the dam, which Egypt considers an existential threat. The most recent round of negotiations was suspended in January, after a disagreement over the negotiation methodology.

Sharaqi said that Booth’s tour seems to be about gathering information before he discusses mechanisms for resuming negotiations at his last stop in Congo.

Abdel Ati told Sky News Arabia March 27 that the international quartet promises neutrality to all parties and will not favor one country at the expense of another. He called on the international community to intervene in the crisis before it escalates further.

In a strongly worded statement on March 30, Egyptian President Abdel Fattah al-Sisi called infringing upon Cairo's water rights a "red line” and repeated Cairo's willingness to reach a legally binding agreement. Sisi stressed, “Our battle is a battle of negotiations.”

In a March 31 press conference in Cairo, Ethiopian Ambassador to Egypt Markos Tekle declined to comment on Sisi's statements, saying only that his country “believes that any solution to the crisis happens through peaceful means.”

Addressing the US move, Tekle told Al-Monitor, “Many of our allies and friends are trying to provide support and assistance to solve our differences and we welcome such efforts.”

Tekle stressed that his country “is open to dialogue and wants an agreement that satisfies all parties.”

Mona Omar, a former adviser on Africa to the Egyptian Foreign Ministry, told Al-Monitor, “The issue lies in the Ethiopian approach and its unwillingness to budge or back down from its hard-line stance.”

She added that US diplomatic efforts will be useless as long as Ethiopia maintains its position.

Omar said that Sisi's recent statements about the dam express Egypt's impatience and directly ask the US to defuse the crisis in the region. “It all depends on the financial and political pressure that the US exerts to dissuade Ethiopia.”

The International Crisis Group's senior Ethiopia analyst William Davison told Al-Monitor that the new US administration is concerned about a range of issues related to Ethiopia, including the Tigrayan conflict, border tensions with Sudan and the GERD crisis.

“The US, along with the EU, are currently supporting the AU-facilitated process, so I think we can expect to see an attempt by the DRC to resume the trilateral negotiations soon,” Davison noted.

Davison argued, “Instead of trying to lead the process, as it unsuccessfully did last year, the US is likely to give weight to the AU process while strengthening the role of mediators and observers so that they can, for example, make proposals.” He noted, “However, it is very unlikely that the filling of the GERD reservoir will be postponed for another year.”

He continued, “Perhaps the best thing we can hope for in light of the bad negotiation atmosphere and lack of time is a limited deal in which all parties can at least agree on Ethiopia's plans and arrangements on how to manage and share the filling and verify the data.”

“But a comprehensive agreement before the second filling seems unlikely,” Davison concluded.