While more than five months have passed since the last round of negotiations on the Grand Ethiopian Renaissance Dam was held in Kinshasa, Congo seems to be preparing to host Egypt, Sudan and Ethiopia for a new round of talks in the hope of resolving the decadelong crisis. 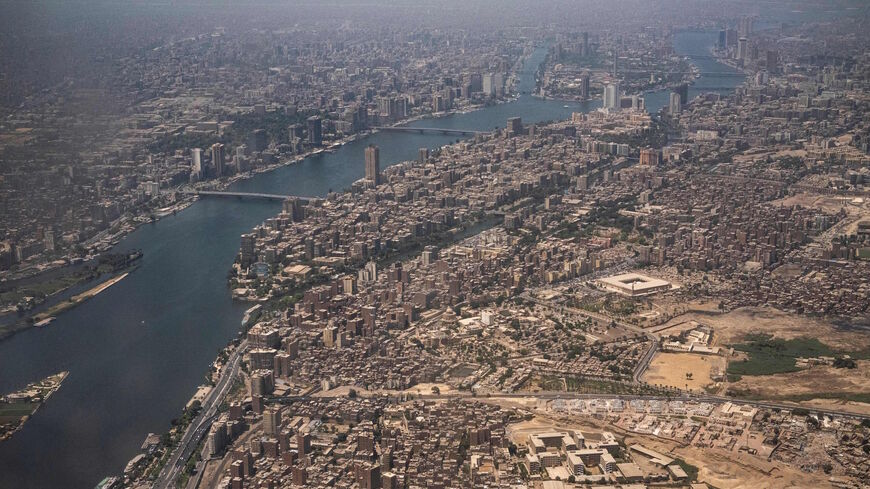 This picture taken on May 14, 2021, shows an aerial view of Egypt's capital, Cairo, showing the historic Old Cairo district (C) and the Nile River islands of (C to top) Manial al-Roda and Zamalek. - AMIR MAKAR/AFP via Getty Images

CAIRO — After more than five months since the last round of negotiations on the Grand Ethiopian Renaissance Dam (GERD) failed in Kinshasa in April, the Democratic Republic of the Congo (DRC) is seeking to revive talks between Egypt, Sudan and Ethiopia in a bid to solve the decadelong dispute over the controversial dam.

On Sept. 15, Deputy Prime Minister and Minister of Foreign Affairs of the DRC Christophe Lutundula Apala arrived in Cairo as part of his tour to the three disputing parties as part of efforts to revive the tripartite negotiations on the GERD.

Abbas Sharaki, a professor of geology and water resources at Cairo University, believes there is a renewed Congolese will to resolve the issue. He told Al-Monitor Apala’s visit comes after months of calm surrounding the GERD dossier after the issue was last raised at the UN Security Council on July 8.

The visit, he added, also coincided with the UN Security Council’s statement on Sept. 15 that called on the concerned parties to resume negotiations “within a reasonable time frame.”

Apala started his tour in Addis Ababa where he met with his Ethiopian counterpart, Demeke Mekonnen, to discuss the resumption of negotiations between the three countries. Then he flew to Khartoum to meet his Sudanese counterpart, Mariam al-Sadiq al-Mahdi, and concluded his tour by holding talks with his Egyptian counterpart, Sameh Shoukry, in Cairo.

On Sept. 16, Apala said in a joint press conference with Shoukry the Congolese president asked him to visit the three countries, meet their officials, carry a message of hope and confidence, and discuss the procedures to resume the GERD negotiations.

He said the Security Council’s statement provided important and needed support for the African Union (AU) to carry out its mission as head of the mediation process in the negotiations.

On Sept. 15, the Security Council called on the three countries to resume negotiations so as to reach a mutually acceptable agreement on the filling and operation of the GERD within a reasonable time frame. Egypt and Sudan welcomed the statement, while Ethiopia said it would not recognize any demands based on the statement.

Despite the Ethiopian position, Apala said at the Sept. 16 press conference, “It is time to give our work a boost that would allow us in the coming days to bring the three parties together quickly and bring harmony to the settlement of the dispute.”

During his regional tour, Apala gave the three countries a document prepared by a group made up of experts from the Congolese presidency and the AU Commission. The document includes a summary of the points agreed upon by the three countries in previous negotiation rounds and the points that continue to be a matter of dispute, in order for them to study it and give their opinion accordingly.

After that, the expert group will study the responses of the three countries and work to bring closer the views, leading to an agreement that is acceptable by all parties, according to Apala.

In the press conference, Shoukry stressed that “the document will be thoroughly examined. We will communicate our comment on this important document with the Congolese presidency, which will certainly contribute to the resumption of the negotiating process.”

Egypt and Sudan have been negotiating with Ethiopia over the GERD for a decade in order to reach an agreement on the operation and filling of the dam, which Egypt views as an existential threat. The last round of negotiations held in Kinshasa in April failed after Ethiopia rejected a proposal submitted by Sudan and supported by Egypt to form an international quartet led by the AU to mediate between the three countries.

Sharaki linked the success of the DRC’s moves this time to two decisive factors: changing the negotiation methodology by giving a greater role to observers in bringing views closer, and setting a time frame for the negotiations before Ethiopia carries out the third filling of the dam’s reservoir next year.

Although Egypt and Sudan have not taken a final position on the Congolese plan, Shoukry stressed during the press conference “the importance of setting a time frame for the negotiations and of reaching a binding legal agreement to counter any additional unilateral measures that obstruct and complicate the matter,” in reference to Ethiopia's unilateral decisions.

In July, Ethiopia completed the second filling of the dam’s reservoir, which Egypt and Sudan rejected.

Shoukry revealed the DRC drew up an action plan to resume the negotiations, but no date has been set yet.

Meanwhile, following her meeting with Apala in Khartoum, Mahdi said Sudan reiterates its call to accept the mediation process led by the AU to reach a satisfactory agreement.

Apala confirmed after the meeting that Congolese President Felix Tshisekedi is leading the negotiation process and has obtained the green light from the three parties to allow any organization or country, whether the United Nations and member states, to provide assistance in resolving this dispute.

William Davison, senior analyst on Ethiopia at the International Crisis Group, said the process led by the AU and the Congolese government is the best option to keep negotiating and to keep trying to reach a consensus and overcome remaining disagreements.

“There is still disagreement on the legal status of any agreement and on the resolution mechanisms, with Sudan and Egypt favoring international arbitration as the final stage of any process and Ethiopia generally being resistant to that,” Davison told Al-Monitor.

“Those, to my understanding, are still the main points of disagreement that the parties will be trying to address when they reconvene under this AU-led process,” he said.

Davison said, “Sadly, there is no real reason currently to think that the parties are ready to make new and necessary concessions, but that will hopefully change if a recently stalled process regains momentum.”

Sharaki agrees with Davison, saying “the meeting could lead to an agreement acceptable by all parties. But none of the parties will get what they want.”

Mohammed Soliman, a nonresident scholar at the Middle East Institute in Washington, told Al-Monitor, “There is little evidence that demonstrates that GERD dynamics have shifted to allow for a finalized agreement between the three countries.”

“The UN Security Council’s statement is an important signal to the three parties and reflects growing international concern regarding the GERD and the potential ramifications in the event of a no-agreement scenario,” he added.

However, he continued, the Congolese foreign minister said “this process requires a lot of effort, but nothing is impossible.”