Sisi warns that "all options open" if diplomacy not resumed; Israel: "Knives drawn" as Bibi gets first shot at forming government; Hotel shuttle diplomacy at Iran talks in Vienna; Mummies on parade in Egypt; more! 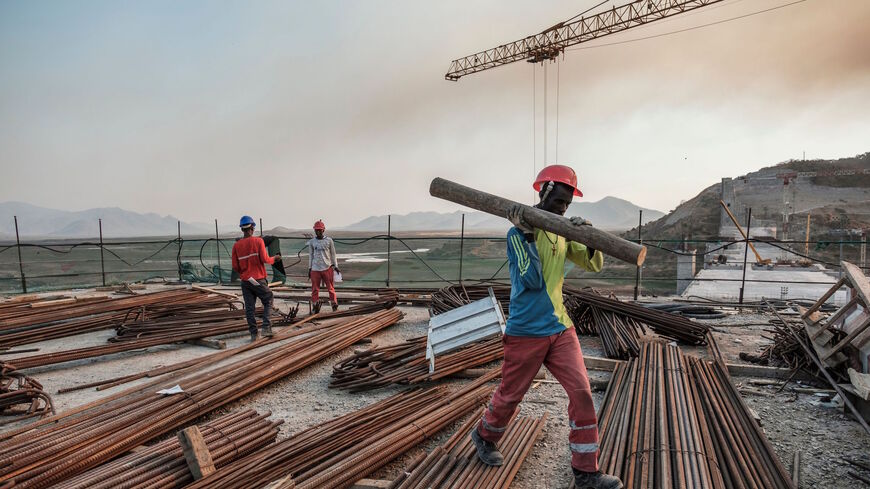 A worker walks with a piece of wood on his shoulder at the Grand Ethiopian Renaissance Dam (GERD), near Guba in Ethiopia, on Dec. 26, 2019. - EDUARDO SOTERAS/AFP via Getty Images

At his Senate confirmation hearing in January, US Secretary of State Antony Blinken warned that the crisis in Egypt, Ethiopia and Sudan over the Grand Ethiopian Renaissance Dam (GERD) could "boil over" in the absence of a diplomatic resolution. It didn’t take long.

‘Last chance’ for diplomacy flops in Kinshasa. Egyptian Foreign Minister Sameh Shoukry said that talks this week in Kinshasa with Ethiopia and Sudan were the "last chance" for a diplomatic solution to the GERD crisis. The talks, mediated by Democratic Republic of Congo President Felix Tshisekedi, who became chairman of the African Union in February, broke up in acrimony on April 6 with Egypt and Sudan on one side and Ethiopia on the other, blaming each other for the failure to reach an agreement on how water in the Nile should be allocated, as Ayah Aman reports. In a statement, Ethiopia declared it will go ahead with the second filling of the GERD, which would diminish the waters that flow to Egypt.

Sisi: Don’t touch our water. Egyptian President Abdel Fattah Al-Sisi said today that "an Egyptian water drop shall not be messed with, because all options open." Egypt's population of 100 million depends on the Nile for 95% of its water needs. Any interruption in the flow of Nile water because of the dam could have economic and social consequences. Egypt wants an internationally brokered plan for water management of the Nile, including the new dam. For Ethiopia, though, the Nile also is a sensitive nationalist issue. Talks mediated by the United States, the World Bank and the African Union, including the latest round in Kinshasa, have so far yielded little progress.

US has leverage. Egypt and Sudan say they will take their case to the Security Council. Blinken has promised "fully engaged" diplomacy in the region. State Department spokesperson Ned Price said on April 6 the United States will "encourage a productive dialogue" to resolve the crisis. The Biden administration has good relations and leverage with all three parties. Blinken spoke this week with Sudanese Prime Minister Abdalla Hamdok about the GERD talks and US support for Sudan’s transition, as we explain here. Washington has long-standing ties, including substantial aid and assistance, to both Ethiopia and Egypt. But are they enough? The Trump administration and the World Bank worked out a framework for management in February 2020, but Ethiopia at the last minute failed to show up and sign the paper. Plus, there are other issues in the background: The Biden administration is also "gravely concerned by reported human rights violations, abuses and atrocities in the Tigray region of Ethiopia."

Complicated, maybe impossible. Israeli Prime Minister Benjamin Netanyahu got the first shot at assembling a new government following yet another round of inconclusive elections. He has the support of 52 lawmakers out of a needed minimum of 61, but Netanyahu knows gaining the required endorsement of nine more “is going to be complicated, perhaps impossible,” Mazal Mualem writes. The embattled premier is standing trial on corruption charges, and as Ben Caspit puts it, a long list of political foes are “now waiting with knives drawn for him to tumble."

Arab parties hold back endorsements. Israel’s longest-serving prime minister sought to win over Arab voters during the campaign, but Afif Abu Much breaks down why the Arab-led parties — the Joint List and Raam — declined to recommend Netanyahu (or any other candidate) to form the next government.

Bennett, Abbas hold the keys. Netanyahu will devote his time and energy on two key figures: right-wing Yamina party Leader Naftali Bennett and Raam leader Mansour Abbas. Bennett told supporters that he will back a "right-wing" government and turned down a partnership with center-left Yesh Atid party leader Yair Lapid. Bibi’s broad pitch to Abbas and Arab voters was that "I see myself as the prime minister of everyone." Rina Bassist has the latest.

The United States, Iran and the remaining parties to the nuclear deal are meeting in Vienna this week for talks aimed at reviving the landmark accord. The US delegation will be in a separate hotel. Iran’s messaging is so far positive. President Hassan Rouhani, still hoping to strike a deal with Washington before he leaves office in June, referred to the Vienna talks as a ‘new chapter.’ But the window of opportunity may be closing with elections in June. Supreme Leader Ayatollah Ali Khamenei seems unyielding in his demand that the United States must first lift all sanctions, but there may still be some room for a path forward. Ali Hashem has the scoop on rumblings of some backchannel mediation and choreography heading into the talks.

As Syria’s economic woes deepen, rival forces are battling for control of critical trade routes. Russia’s recent bombing of Turkish-controlled areas in northern Syria were likely intended as a not-so-subtle message to Ankara, which backs the opposition and is under pressure from Moscow to reopen the strategic M4 highway.

Secretary of State Antony Blinken, meanwhile, is pressing Russia and China to allow the UN Security Council to facilitate greater humanitarian access to opposition-controlled parts of Syria. It’s painfully needed: The UN says 13.4 million people across Syria require aid to survive. But from Moscow’s perspective, the flow of humanitarian aid to the Kurdish-held northeast and rebel-controlled northwest would only reinforce the status quo, Fehim Tastekin writes.

Private sector firms in Saudi Arabia will pour $1.3 trillion worth of investments into the Saudi economy over the next decade, according to Saudi Crown Prince Mohammed bin Salman, as part of a plan to reduce the economy’s dependence on oil. But foreign investors have been wary of billion-dollar investments in Vision 2030 flagship megaprojects, including the futuristic city NEOM. As Sebastian Castelier explains, “The narrative of Saudi investments leading the way may be intended to compensate, or overshadow, for the kingdom's inability to meet foreign direct investment targets.”

Female genital mutilation (FGM) remains a problem in Egypt, despite a 2008 law criminalizing the practice. Lawmakers have given preliminary approval to legislation that would impose jail sentences on violators, but there’s skepticism over whether the tougher penalties would actually discourage FGM in parts of the North African country where the ritual practice is common.

The parliament’s move coincided with the death of feminist author Nawal El Saadawi, whose own experience with the procedure “awakened Saadawi's sense of the injustice and violence suffered by women in Egypt's patriarchal society, particularly in rural communities like the one she grew up in,” writes Shahira Amin.

Twenty-two ancient mummies — 18 kings and four queens — processed through the streets of Egypt’s capital on Saturday, making their way from Tahrir Square to the National Museum of Egyptian Civilization in the El Fustat area of Old Cairo.

Shahira Amin writes that superstitious observers feared disturbing the dead could unleash yet another disaster in a country still reeling from the world’s worst most memeable traffic jam. The multimillion-dollar parade avoided the dreaded "curse of the pharaohs,” but it remains to be seen whether the spectacle will succeed in luring much-needed tourists back to Egypt.

Amberin Zaman has the wild story of how a pair of small-town Ukrainian businessmen were taken hostage by the Kurdistan Workers Party after the militants were swindled out of $1 million. The three-and-a-half-year saga, complete with code names, illicit weapons and an Iraqi mountain cave-turned-jail cell, has all the makings of a Cold War spy thriller. Plus, an appearance by Trump ally Erik Prince.