Likud’s enthusiasm over the speech of Arab legislator Mansour Abbas might be opportunist and not candid, but it is changing Israeli politics and society irreversibly. 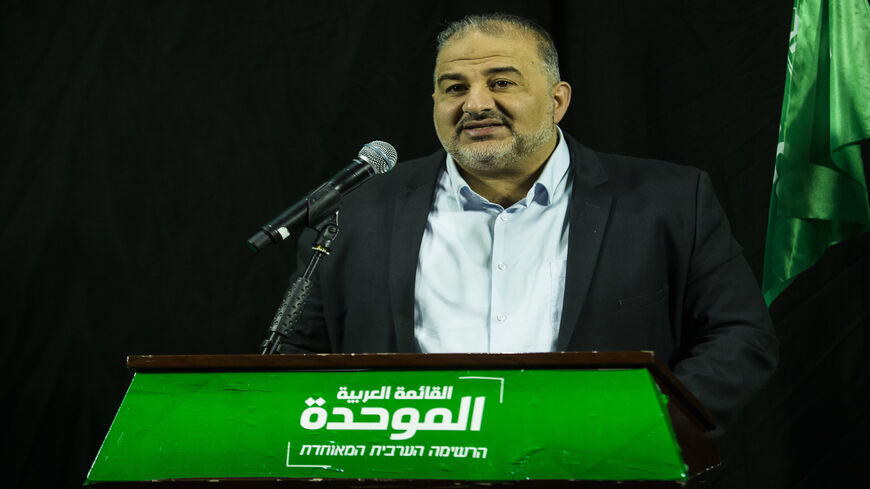 Head of the Ra’am party Mansour Abbas addressed Israelis, in a "state-of-the-nation" like speech, on April 1.

It was not a dramatic declaration of war nor a historic announcement of peace. Nonetheless, it was probably one of the greatest political TV moments in modern Israeli history. The person facing the cameras in a live broadcast aired in primetime on all major TV channels was not a prime minister, a defense minister or military chief — he was a politician, rather anonymous until recent months, who heads Israel’s Arab Islamist party.

Speaking in Hebrew, Abbas addressed first and foremost the Jewish electorate, which up to that moment regarded him as a cross between a Hamas terrorist and a clone of reviled Turkish President Recep Tayyip Erdogan. His party Ra’am had sent shockwaves through Israeli politics by garnering sufficient votes in the March 23 elections to command four Knesset seats. With his April 1 speech, Abbas again made history.

Since announcing several months ago that he would not rule out membership in a coalition led by Prime Minister Benjamin Netanyahu, Abbas has stirred up a hornet nest. Ahead of the elections, Abbas split from the Arab Joint List with which Ra’am had run previously and which continues to view Netanyahu as the devil incarnate. He mobilizes sufficient votes to cross the 3.25% Knesset electoral threshold, crushing the Joint List in the process and sending it plunging from 15 seats to six.

The hype and promo for his address to the nation this week was fit for a Hollywood star. The political right, which would normally have called to boycott Abbas and mounted furious protests, awaited his speech with bated breath. Netanyahu’s followers were glued to the performance of the man who heads Israel’s equivalent of the Muslim Brotherhood. They seemed to be in love.

Addressing the nation at 8 p.m., the start of the primetime evening news shows, has in recent years become the sole prerogative of the one and only Benjamin Netanyahu. This was the first time ever that an Arab politician occupied that timeslot. Abbas did so with skill and charm. Within minutes he had morphed from an archvillain into everyone’s favorite Arab. The Muslim Brotherhood’s ideology, the adherence to Muslim religious law, Sharia, the branding of Israel as a bone stuck in the throat of the Middle East — all were swept under the rug. Even the Jewish ultra-Orthodox parties cheered in a display of brotherhood among religious minorities.

Not so long ago, during a TV interview with Ynet March 16, Netanyahu was asked whether he would form a government supported by Ra’am and Abbas. He said No. “I unequivocally pledge that there will be no such thing, I will not lean on them [for outside-the-government support] and I will not include them [in the government], neither in abstention [in a Knesset confidence vote of the new government], nor anything, because they are an anti-Zionist party.”

Israelis are used to Netanyahu’s meaningless declarations and false promises. What is different this time is the one simple fact that without Abbas, Netanyahu does not have sufficient Knesset votes to form a government. Period. His political life and probably his personal freedom depend on the protege of Turkey’s Islamist president, on the ally of the Muslim Brotherhood from Luxor, on the man Netanyahu’s son Yair Netanyahu called “the Israeli branch of Hamas” just two years ago.

Abbas did not mention the occupation of Palestinian territory in his speech, nor the Israeli Nationality Law on the country’s Jewish character, or other explosive issues at the heart of the deep ideological divide between his voters and Israel’s Jewish mainstream. He talked of brotherhood, of a shining future, of coexistence and the desire to integrate into Israeli society. For Netanyahu’s fans, it was enough. They rushed to certify his speech as kosher — anything to save their leader. Whether this will suffice to win over the other partners Netanyahu needs for his coalition, such as the Religious Zionist Party, is highly doubtful.

Even discounting the fact that none of this could have happened were it not for Netanyahu’s desperate straits, the effect of this development between Israeli Arabs, in general, and the Islamic Movement, in particular, and Netanyahu’s right wing, is an astounding event by any standards. The political left has been talking of cooperation with the Israeli Arab parties for ages.

Only last year, the Blue and White party led by Defense Minister Benny Gantz was on the verge of accepting Arab support in order to form a government to replace Netanyahu. At the time, Netanyahu scuttled the move, painting the idea as betrayal and tarring Blue and White leaders Gantz, Gabi Ashkenazi, Moshe Yaalon and Yair Lapid — the first three former heads of the Israeli army — as traitors. “This is a direct threat to the citizens of Israel,” Netanyahu had raged at the microphones and cameras. “These are people who reject the existence of a Jewish state in Israel.”

Obviously, things have changed. Netanyahu has not come out publicly in support of a partnership with Abbas, but his fingerprints are clearly all over the developments of recent days. Some reports even claim that the speech had actually originated with Netanyahu’s people.

Netanyahu’s current cheerleading, albeit behind the scenes, of the very people still ideologically opposed to a Jewish state, is an indelible event. With that, he has become the official keeper of the seal, for the inclusion of Arab citizens in Israeli society. In many ways, his willingness to join forces with Ra’am is as meaningful as the speech he delivered in 2009 at Bar-Ilan University recognizing the two-state solution. And even if his gambit fails and he ends up, as he usually does, abandoning those who reach out to him, his actions, this recognition of Israeli Arabs as part of Israel’s society, cannot be undone.

The acceptance and even enthusiasm of Netanyahu’s supporters, embracing cooperation between Zionist parties and an Arab one seems astonishing. Had Gantz been the putative prime minister, Netanyahu’s mouthpieces would have been blasting the airwaves with heartbreaking wails, demanding that Abbas declare, at once, that Israel is the nation-state of the Jewish people and calling him a “terrorist lover.” After all, Abbas supports freeing all Palestinian prisoners jailed in Israel and visits the families of those who carried out terror attacks against Israelis. And now? Now he is one of “ours.”

There is no telling how events will unfold. Will Netanyahu convince the Religious Zionist Party of ultra right-winger Bezalel Smotrich and Kahanist Itamar Ben-Gvir, and the Yamina party of Naftali Bennett, to take part in a coalition that owes its existence to the Islamic Movement in Israel? The prospects of that happening are slim.

The move has encountered stubborn resistance on the right, so far. Even Yisrael Hayom, Netanyahu’s home team newspaper, opined April 2 that the prime minister was undergoing a “moral collapse.”

That being said, even if the move fails, the political right will have a hard time attacking rivals in the future for considering similar tactics. In his struggle to evade a guilty ruling in his corruption trial, Netanyahu has provided a stamp of approval to those who just minutes ago were perceived as the bitterest enemies of Zionism and Israel. At this stage, with all due respect to the amazing coronavirus vaccine rollout and the Abraham Accord he engineered with Arab states, this is Netanyahu’s true legacy.