Prime Minister Benjamin Netanyahu outwardly incites against the Arab population while privately asking Arab Knesset members for help when he needs it. 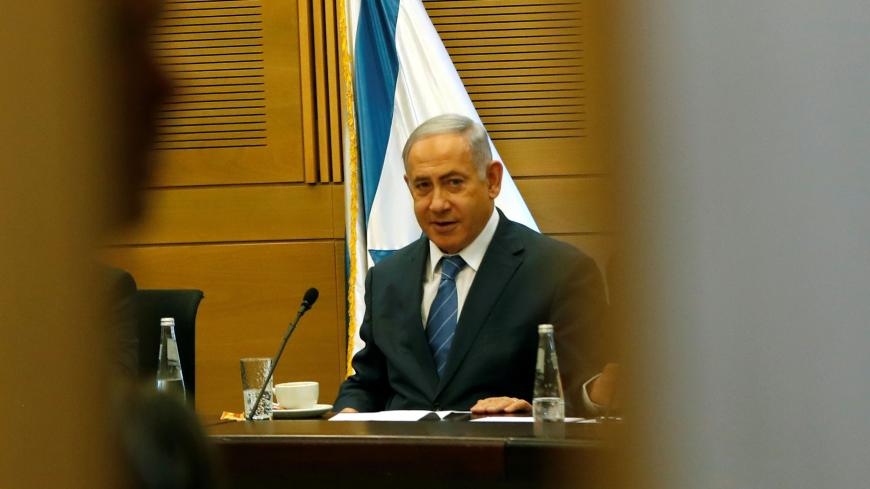 Israeli Prime Minister Benjamin Netanyahu delivers a statement to the media at the start of his Likud faction's meeting at the Knesset, Israel's parliament, in Jerusalem, Sept. 23, 2019. - REUTERS/Ronen Zvulun

A day after the Sept. 17 election, once most of the votes were counted and Prime Minister Benjamin Netanyahu realized he did not have the 61-seat Knesset majority to form a government, he arrived at Likud headquarters in Tel Aviv and declared that “Israel needs a strong, stable, Zionist government” rather than one dependent on “anti-Zionist” parties. Netanyahu was saying that there was no room for the Joint List in Israel’s government — a message to his rival, Blue and White leader Benny Gantz, lest he dare consider forming the country’s next government with Arab party backing.

Netanyahu ignored the fact that one of the partners in the right-wing religious bloc — the ultra-Orthodox Agudat Yisrael faction of Yahadut HaTorah — is far from Zionist. In fact, Agudat Yisrael was formed in the early 20th century to counter the emerging Zionist movement.

While Knesset member Aida Touma-Suleiman of the Joint List declared on Sept. 21 that she and her colleagues would not join a ruling coalition, the Likud warns at every opportunity that a coalition led by Gantz would be “dependent on the Arab parties” and thus a “dangerous government.” In other words, the ruling party of the “only democracy in the Middle East,” as Israel prides itself on being, seeks to prevent almost 21% of its citizens from being represented in a future government.

How, then, do such racist pronouncements by the prime minister and his Likud line up with a recent statement by Arab Knesset member Abbas Mansour exposing past contacts between the Likud and Arab parties? The chairman of the Islamist Ra’am Party confirmed in a Sept. 24 interview with Channel 13 that associates of Netanyahu had spoken at the beginning of May with Arab parties in a bid to mobilize their support for disbanding the Knesset. "Meetings were held with a few Knesset members and one minister who asked us to abstain in the vote on disbanding the Knesset” in order to give Netanyahu the majority he needed to dissolve the Knesset and call new elections, he said. The contents of these talks are documented in a series of WhatsApp messages, he added.

Earlier the same day, former Ra’am Knesset member Abdel Hakim Hajj Yahya inadvertently revealed in an interview on Kol Hai Radio that on the eve of the dispersal of the 21st Knesset, Netanyahu’s close associate and confidant Natan Eshel and Likud Knesset member Mickey Zohar discussed with Arab lawmakers the possibility of mobilizing their support for a Netanyahu-led government to avert new elections.

A reminder: In light of the staunch refusal by hawkish former Defense Minister Avigdor Liberman to join the government Netanyahu sought to form after the April Knesset elections, Netanyahu required at least one vote from the opposition benches. Without this extra vote, he could not obtain a 61-seat majority that would allow him to form a new government. According to the descriptions of the two Arab lawmakers, the Likud tried to convince them to abstain so that Netanyahu would win a vote of confidence for a new government.

Mansour clarified the events in a conversation with Al-Monitor this week, saying, “The talks were conducted in May after the 21st Knesset was sworn in and before it was dissolved. Netanyahu had failed to form a majority government and then he considered going for a government backed by 60 Knesset members. That was how we were approached by a Likud lawmaker, a government minister and officials in the prime minister’s office with the question: What would you demand in return for abstaining from the vote on a new government?’”

Mansour believes there were similar appeals to other opposition lawmakers. Asked how he thought Arab voters would react to cooperation with Netanyahu, Mansour replied, “We operate based on policy, not on specific names. We saw an opportunity to disarm Netanyahu of some of his racist, inciting ammunition against the Arab public and we presented a list of economic, social, political and other demands. We do not support any candidate for prime minister for free, but if Netanyahu had acceded to our demands, what more do I need as an elected official?”

Another important reminder: The Arab parties did not run for the 21st Knesset as one bloc, but rather as two separate lists, one comprised of the Ra’am-Balad parties (which won four Knesset seats) and the other of the Hadash-Ta’al parties (six seats). Mansour stressed that in the talks with Netanyahu’s people he was representing his Ra’am party and not the Joint Arab alliance of four parties. It was only ahead of the September elections that the four factions reunited in the Joint List.

These developments are illuminating for two reasons. One, Netanyahu’s persistent campaign against the Arab parties, as expressed mostly in social media invective, is for show. For the sake of his political survival, Netanyahu does not in fact rule out political cooperation with Arab parties. The second lesson, just as important, is that there are new voices within the Arab parties openly calling for cooperation with the government to benefit Arab society. Taken together, Mansour’s comments, the declaration by Joint List Chair Knesset member Ayman Odeh about the bloc’s willingness to join a center-left Israeli government and the historic endorsement by 10 of the 13 Joint List lawmakers of Gantz for prime minister all point to a shift in the thinking of some Arab Knesset members.

These lawmakers are saying that they were elected to play the political game to improve the lives of their voters and will no longer be content with just filling the Knesset benches. This shift reflects the growing interest of the Arab public in participating in politics and even joining a government coalition. That is why the Joint List endorsed Gantz as candidate for prime minister for the first time since the Arab parties endorsed Yitzhak Rabin for prime minister in 1992.

Netanyahu and his Likud are playing a double game. Publicly, they blast any cooperation with Arab parties and exclude an entire segment of the population from power, but in back rooms they conduct talks with the same people they attack in the media. Mansour and his fellow Knesset member Hajj Yahya exposed the true face of Netanyahu and the Likud when they revealed to the world that all the calls to exclude the Arab community and boycott the Arab parties were hypocritical lies. In the end, it’s all about politics.

If we go back to the resignation of Prime Minister Ehud Olmert in September 2008, we will find that Netanyahu joined up with the Arab parties to prevent centrist Tzipi Livni from forming a government. And if we go back further to 1995, that same Netanyahu led the Likud to support motions of no confidence in the government submitted by Hadash and the Arab Democratic Party to protest the appropriation of Palestinian lands in East Jerusalem to build homes for Jews. There is nothing more two-faced than that.