In the southern West Bank near the separation wall lies the village of Khirbet al-Radhim, where seven Palestinian families live without roads, electricity or water and report constant harassent by the Israeli authorities and settlers. 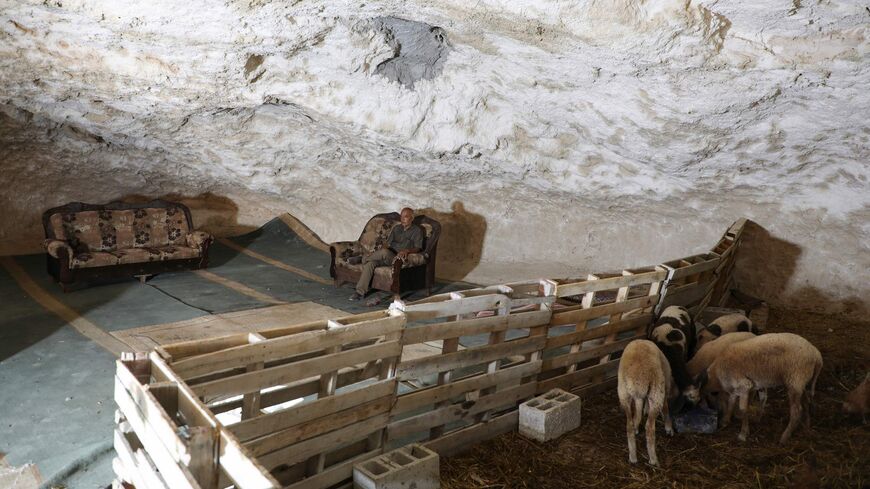 Sheep feed in an enclosure inside the cave home of Ahmed Amarneh, in the village of Farasin, west of Jenin, in the northern occupied West Bank on Aug. 4, 2020. - JAAFAR ASHTIYEH/AFP via Getty Images

RAMALLAH, West Bank — “All this land is mine. I inherited it from my grandfather and father, and it is registered from the Ottoman days with document proof,” said Issa Abu Kebash, pointing to land extending over the Khirbet al-Radhim mountaintop. Abu Kebash, 74, said his land is at risk of confiscation by the Israeli authorities because it is located near the Green Line, the separating border between the occupied Palestinian territories in 1967 and those occupied in 1948.

Abu Kebash’s land, south of the town of Samou in the southern West Bank, is within Area C, which is under Israeli security and administrative control. It is surrounded by settlements on three sides, and the fourth is the separation wall. He said it's become a prison for his family and six other families still living there. His family lives in a cave known locally as Tur. One of the other families has its own cave as well.

Abu Kebash told Al-Monitor that the areathe area was once full of inhabitants who farmed the land they lived on. When Israel took control of the area in 1967, most of the residents left for the nearby town.

Mohammad Nidal, a civil engineer working for the Samou municipality, helped Al-Monitor reach the site. He said that the land, which is considered part of the Samou municipality, is one of eight khirbets (small communities) threatened with settlement and annexation around Samou. Its location in Area C makes it difficult for the municipality to provide services, like extending electricity lines or building roads, as it needs the approval of the Israeli authorities.

Nidal said that before 1948, Khirbet al-Radhim was inhabited by farmers. But after 1948, Israeli harassment led to most inhabitants abandoning the area for Samou and only a dozen families stood their ground.

With the beginning of Israeli settlement in the area in 1984 and the construction of the separation wall, more families fled attacks by the settlers and the Israeli army, Nidal said. There is no data available on how many families once lived there but now only seven remain: Abu Kebash, Zaareer, Al-Mahariq and four Awada family groups.

According to Nidal, these families' presence is the area's only defense as the settlers build outposts that expand and are then legalized, like in the Asael settlement west of Khirbet al-Radhim.

A group of lawyers recently formed the Legal Support Committee for Area C and provides legal assistance to residents in Israeli courts.

A day in Khirbet al-Radhim with Issa Abu Kebash’s family exposes the harsh life of these Palestinian families. Abu Kebash told Al-Monitor, “Our life is very difficult, but our presence on this land is the only thing that protects it. Settlements will devour the land abandoned by its people."

Abu Kebash’s land extends over 150 dunums where he grows wheat, vegetables and grapes and raises bees, chickens and other livestock. The butter, honey and ghee he produces are his only source of livelihood in this isolated area.

The father has tried to expand his cave home by building a brick and cement structure and a tin roof, but demolition is a constant threat. “They demolished five of my houses and they tried to demolish the cave, but they were not able to,” he said.

Abu Kebash applied three times to the Israeli Civil Administration for a construction permit to build a structure for his family to live in, but each request was rejected on security grounds.

Inside the cave, the rock walls are blackened from the family's heating and cooking fire and there are stacks of mattresses, blankets and kitchen utensils. Rania, the eldest daughter, has painted colorful murals onto the walls.

There is a single light bulb that draws electricity from solar cells, which the family obtained with help from Denmark.

During the winter, rainwater puddles at the foot of the mountain, completely blocking the road. Families are trapped in their caves until the water recedes.

Abu Kebash must also provide drinking and irrigation water in an area that turns dry and barren in the summer. He has to buy water at exorbitant prices to meet the needs of his house and land.

Abu Kebash has eight daughters aged 2-20. Their mother is in the field most of the daytime so Rania takes full responsibility for the house, milking the cows, preparing butter and ghee, baking bread and taking care of the animals.

Rania was able to complete her high school education, but the roughness of the road and the family's distance from the town center have kept her from university studies. She told Al-Monitor that she and her sisters only leave the house for the field to help their parents. Her father drives his tractor, their only means of transportation, to town every 10 days or so. He sells what the land and livestock produce and buys what he can with the revenue.

Rania recalls the hardships of going to school so far from home. She said that the back-and-forth trip took all day. Her father would drive her on the tractor to the main street, where she would catch the school bus. Her younger sister now faces the same challenges.

Two years ago, life became more difficult for Rania and her sisters when a settler seized a nearbby plot of land, and began blocking their way, chasing them when they went to the fields and releasing dogs to attack them.

Today, Rania says all she wants is to be able to go into town to study art, which she considers her only outlet.