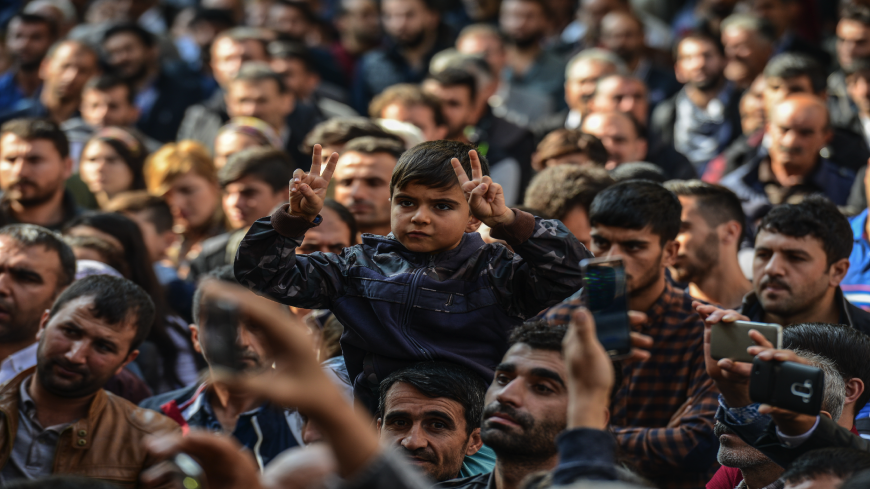 A young participant flashes the victory sign in front of the municipality headquarters in Diyarbakir, southeastern Turkey, on Oct. 30, 2016, during a pro-Kurdish demonstration. A Turkish court has barred Figen Yuksekdag, a leader of the main pro-Kurdish party, from leaving the country, accusing her of "belonging to an armed terrorist organization," the state-run Anadolu news agency reported on Oct. 29, 2016. The HDP denounced the decision as "totally arbitrary" and said it would appeal. President Erdogan accuses the HDP of links to the outlawed Kurdistan Workers Party (PKK). - ILYAS AKENGIN/AFP via Getty Images

Turkey’s moves to shutter the pro-Kurdish Peoples’ Democratic Party (HDP), the country’s second-largest opposition grouping in the parliament, drew sharp criticism from the Joe Biden administration late Wednesday. The State Department said the decision to dissolve the HDP as demanded in a Turkish prosecutor’s lawsuit filed March 17 “would unduly subvert the will of Turkish voters, further undermine democracy in Turkey and deny millions of Turkish citizens their chosen representation.”

The statement called the stripping of HDP deputy Omer Faruk Gergerlioglu’s parliamentary immunity also on March 17 “troubling” and said the United States was “closely monitoring events in Turkey.” Gergerlioglu, an ethnic Turk, has earned respect across Turkey’s deeply polarized landscape for his selflessly brave advocacy of victims of torture and government abuse. The parliament revoked his status after a court ruled in February to uphold a two and a half year prison sentence for the deputy for sharing a news article on his Twitter feed calling for the resumption of peace talks between the government and outlawed Kurdistan Workers Party militants.

The tough language will have come as something of a cold shower for Hasan Murat Mercan, a senior member of the ruling Justice and Development Party (AKP) who assumed his duties this week as Turkey’s new ambassador to Washington.

Mercan has carved a mission for himself of improving rocky relations between the NATO allies. But Ankara’s unremitting assault on rights and freedoms is poised to undercut him at every step. Turkey has repeatedly declared that it will not bow to US pressure and permanently mothball newly acquired Russian-made S-400 missiles, which are at the center of the meltdown. Turkey’s defiance triggered sanctions on Turkey’s state defense procurement agency under the Countering America’s Adversaries Act.

The Biden administration is signaling that its dealings with Turkey will not be solely dictated by realpolitik and that its appalling human rights record will come under far greater scrutiny after four years of mollycoddling by former President Donald Trump. It's criticized Turkey over the continued detention of Turkish philanthropist Osman Kavala over flimsy terror charges and aired displeasure over senior Turkish officials’ claims that the United States supported the failed 2016 coup to bloodily unseat the AKP. Biden has yet to call Turkish President Recep Tayyip Erdogan. Turkish pride was further bruised when White House Press Secretary Jen Psaki said in a March 3 briefing that Biden would do so “at some point.”

HDP officials laud Washington’s new tone. “The statement was definitely a welcome change to the silence on the HDP and repression of the Kurds in Turkey,” said Giran Ozcan, the HDP’s Washington representative, in emailed comments to Al-Monitor. “Although there was no mention of the Kurds in the statement, this is definitely an indication that the current administration is serious about critically engaging with human rights abuses around the world, even if the country in question is an ally.” Ozcan continued, “Hopefully this will mean that the State Department will be more open to new ideas on how to engage with and counter the regressive and destabilizing policies of the Turkish government.”

Washington’s stance contrasts with that of the EU. The bloc, largely at German Chancellor Angela Merkel’s behest, has sought to strike a cautious middle ground between rebuking Turkey, a candidate for full EU membership (now a pipe dream), over blanket repression and continuing to engage with it in ways that benefit both. In a March 16 letter addressed to Josep Borrell, the EU High Representative for Foreign Affairs, Human Rights Watch and Amnesty International castigated the EU for its wimpish stand. “We are concerned that over the past year, the human rights situation in Turkey appeared to be largely absent from both European Council discussions on EU-Turkey relations and high-level EU meetings with the Turkish authorities. Instead, these discussions focused primarily on the situation in the eastern Mediterranean and cooperation with the Turkish authorities in the field of migration,” the human rights watchdogs noted.

“EU leaders have suggested that human rights concerns are considered secondary or separate from the EU’s wider efforts to engage with the authorities,” they added.

European leaders were widely expected to weigh and likely plump against sanctions on Turkey at their forthcoming summit on March 25-26. While oceans and seas separate Turkey from the United States, Europe and Turkey are physically and economically intertwined. So punishing Turkey doesn’t come without a cost.

Turkey has since 2016 acted as a holding pen for millions of migrants who want to go to Europe, and in turn, it has received financial support from the EU. As such, it’s unlikely that the AKP’s efforts to squash the Kurdish opposition group will alter EU thinking.

Supreme Court Chief Public Prosecutor Bekir Sahin, an Erdogan appointee, accused the HDP of “aiming to destroy and abolish the indivisible integrity of the State with its country and nation.”

He additionally wants to cut off Treasury funding for the party and ban more than 600 HDP officials permanently from political life, including some of its most charismatic figures such as Selahattin Demirtas, the HDP’s former co-chair, and Gultan Kisanak, the forcibly ousted co-mayor of the Kurds’ unofficial Diyarbakir. Both are in jail on thinly supported terror charges along with scores of other HDP officials.

The moves make a mockery of Erdogan’s so-called human rights action plan that was unveiled amid much fanfare on March 2.

The HDP has been a major headache for Erdogan ever since the party robbed the AKP of its parliamentary majority in parliamentary elections in 2015. The HDP’s support for a bloc of opposition candidates helped them snatch Istanbul and Ankara in municipal elections held in 2019.

The government says the HDP is acting as the PKK’s political arm. The militants have been waging an armed insurgency initially for Kurdish independence and now to form political autonomy for Turkey’s 16 million Kurds.

The PKK is classified as a terrorist organization by the United States and the European Union. The group is pushing hard to leverage the Pentagon’s alliance with its Syrian wing, the People’s Protection Units, to get delisted. US officials insist that engagement with or delisting the PKK is not the agenda. However, Turkey’s continued repression of the Kurdish movement both at home and beyond its borders is likely to generate support for delisting among some members of Congress, where the mood against Ankara is already distinctly hostile.