How Turkey’s AKP undid its legacy on 'Kurdish question'

President Recep Tayyip Erdogan has ended up reverting back to the "Old Turkey" concepts that he had criticized for years. 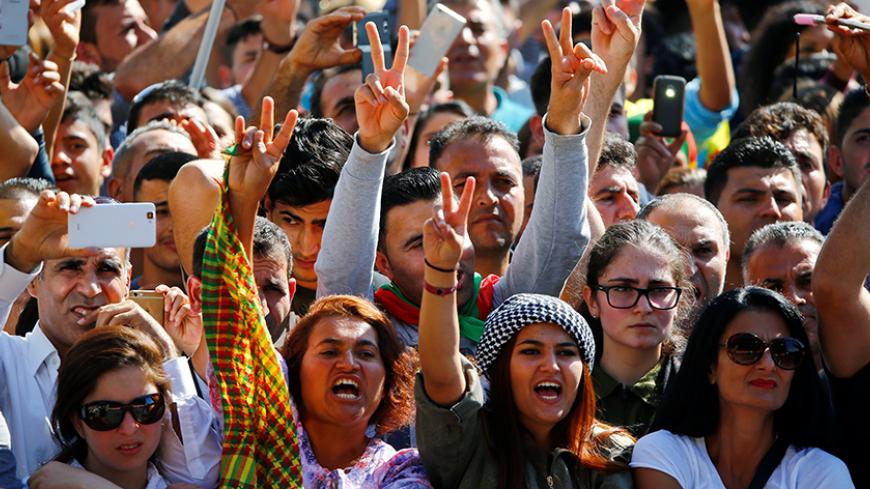 With the arrest of the co-mayors of Diyarbakir, Turkey’s pivotal Kurdish city, on Oct. 25, the ruling Justice and Development Party (AKP) took another step in its latter-day strategy on the “Kurdish question”: to kill all terrorists and arrest all their political supporters. A strategy, in other words, that almost all Turkish governments have pursued, more or less, since the establishment of the Turkish Republic in 1923 — leaving behind thousands of casualties, with no end in sight.

Yet there is a major irony in this AKP strategy, because it was none other than the AKP and the intelligentsia who told us, for years, that this “security-focused solution” to the Kurdish question was a dead end. It was also they who tried a fundamentally different approach: reforms for all Kurds and negotiations with the Kurdish militants. It is interesting how they ended up reverting back to the concepts of the “Old Turkey” that they had criticized for years.

The origin of the AKP’s relatively liberal and dovish stance on the Kurdish question goes back to the 1990s, when the party’s predecessor, the Welfare Party, departed from the traditional nationalism of the Turkish right. The party’s Islamist intellectuals argued that the Kurds were unhappy with the Republic of Turkey exactly for the same reason as the religious conservatives: They were oppressed, humiliated and marginalized, and their reactions were only handled with brute force.

When he became prime minister in 2005, Recep Tayyip Erdogan voiced this line. In 2005, in an important public speech in Diyarbakir, he used the term “Kurdish question,” which was then a taboo for Turkish politicians. He promised to win Kurdish votes, as his party initiated a series of significant reforms. In 2003, Kurdish “language courses” had become legal. Then, the state TV broadcaster TRT started a Kurdish-language TV channel in 2008, breaking another taboo. In 2012, Kurdish-language classes became optional in Turkish government schools.

Aside from such reforms on Kurdish-language rights — all which were absolutely necessary — the AKP also tried something that no previous Turkish government had tried seriously: a political negotiation with the Kurdistan Workers Party (PKK), whose war against the Turkish government has resulted in some 45,000 violent deaths since 1984. With Erdogan’s blessings, in 2009, Turkish intelligence began bargaining with the PKK’s jailed leader, Abdullah Ocalan, and the PKK’s executives in Europe. In October 2009, some PKK fighters in Iraq walked to the Turkish border — without arms — and were given amnesty, to the joy of supportive Kurds and the astonishment of skeptical Turks.

In October 2011, a PKK attack on a Turkish garrison killed the good mood, and reignited the conflict, which continued until early 2013. But Erdogan pushed for peace again. In March 2013, Ocalan called for a permanent farewell to arms, giving the nation a sense of optimism. However, this second “peace process” would fail too, in July 2015, the Islamic State began bombing Kurdish targets inside Turkey, and Turkish security forces also took their revenge on the PKK.

Why did that second phase of the “peace process” fail? In August 2015, I addressed this question in an Al-Monitor article, and found the answer in “the PKK’s militancy, the poisoning impact of the Syrian civil war and grand ambitions in Ankara.” That is still valid, but something needs to be added now: The failure of the peace process led to a right-wing drift in Turkey, especially within the ruling AKP. It is a bit like the right-wing drift in Israel after the collapse of the Oslo peace process in 2000. “We tried peace with these terrorists,” the common logic in both cases read, “and saw that they only understand through force.”

This right-wing drift took place not only in the AKP’s policies but also the whole AKP universe — the media and a plenitude of AKP-affiliated organizations. The people who were just recently telling us about the great historic Turco-Kurdish peace — who were calling everybody to emphasize with “the guerrilla” — are now speaking about nothing but “wiping out the terrorists.” Similarly, the AKP pundits who sympathized with Leyla Zana, who was arrested in 1991 for being a “pro-PKK politician,” are now cheering for the arrest of Gultan Kisanak, the co-mayor of Diyarbakir, for again being a “pro-PKK politician.”

Meanwhile, those who call for renewed peace talks with the PKK are condemned by the same AKP crowd for being “traitors” — as they themselves were branded by the opposition parties during the peace process. People can even lose their jobs and find themselves prosecuted with a single pro-peace tweet, as Omer Faruk Gergerlioglu, a human rights activist, recently discovered.

One problem here is that the latter-day AKP is really not a political party in the traditional sense of the word. It is simply an obedient army lined up behind President Erdogan. When Erdogan calls for peace, peace is venerated. When Erdogan vows to wipe out terrorism by all means necessary, hawkishness is venerated. Nobody looks back and wonders whether there is any consistency in the party’s principles, values and goals. No one asks, God forbid, whether Erdogan could be wrong.

The deeper problem is that by gradually taking over all institutions of the state, the AKP has turned into what it has targeted: a paranoid Leviathan that never finds any fault in itself, and that sees all problems around itself as heinous plots that need to be crushed.

All of this is not to say that the PKK is not a real terrorist threat to Turkey — it definitely is. And the Turkish government surely has the right to defend itself against the PKK or other terrorist groups. But in its first decade in power, anti-terrorism was not the only thing the AKP had in mind. It was also aware that the PKK has millions of sympathizers, that the state had to win their hearts and minds and that a political solution was the only way out. As faint as it was, this was the best hope Turkey ever had to solve the centurylong “Kurdish question.” Sadly, it is trashed today by none other than the very party that created it.