Prime Minister Recep Tayyip Erdogan’s ambition to be “peacemaker” on the Kurdish issue has to be linked to Turkish policies in Iraq and Syria, writes Cengiz Candar. 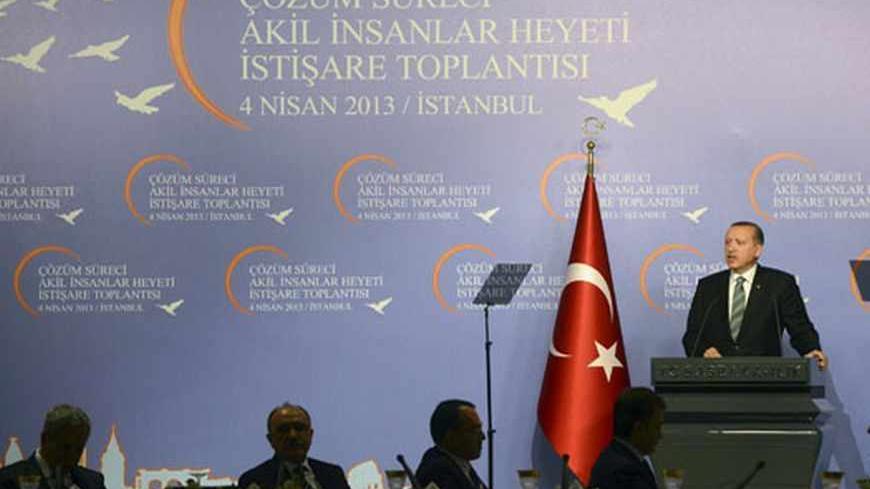 One of the most striking successes of the Justice and Development Party (AKP) government in Turkey has to be its masterful management of the most exciting agenda item of the country which the public refers to as the “peace process” instead of  the “solution process.”

As with many other issues, here too, the great communicator is Prime Minister Recep Tayyip Erdogan himself. In an appeal to the news media — that sounded more like an instruction — Erdogan wanted the steps he is taking to be seen as a “solution process.” Now he is working on being perceived as the leader who is taking his country step-by-step toward much desired peace. As perception becomes a reality, it will undoubtedly be added to Erdogan's accomplishments.

At the moment, Erdogan on stage and Abdullah Ocalan off stage from his prison island are taking Turkey toward peace with seemingly choreographed moves. Questioning this captivating dream is not allowed, even if prompted by intellectual curiosity, because it might spoil the dream of peace. Erdogan, the ultimate arbiter, announced 63 names of people who will make up the “Commission of Wise People,” which will take on the initiative to enlighten the public on the peace process through meetings, symposiums, panels, etc., in seven different Turkish regions. The group includes some well-known journalists, prominent leaders of nongovernmental organizations, celebrities such as movie stars and popular singers, and several academic experts.

On April 4, Erdogan gathered the entire commission for dinner at the Dolmabahce Palace where he has a prime ministry office. He praised them extensively, described the “peace process” once again and gave them a mandate of two months that would be concluded with the submission of reports from each of the seven "wise people" sub-committees. This was a major public relations move by Erdogan. He managed to mobilize a broad spectrum of intellectuals around his efforts thanks to the “magic” of promising “peace” between Turkey and the Kurds.

During this meeting behind closed doors, Erdogan revealed the results of a poll he had requested and trusts. He related the percentage of support for the “peace process” in the different regions of the country. In Turkey’s heavily Kurdish populated regions of  the southeast and east, the support for the process appears to be 87% and 71%, respectively. In the strong conservative and nationalist Central Anatolia region support is said to be 57%. From figures of Central Anatolia it is understood that the ruling party has captured some Nationalist Movement Party (MHP) strongholds and dented its popular base. Those who approve and do not approve are equal at 43% in the Black Sea region, while 47% is in favor and 41% is against the process in the Mediterranean region.

Because of the inclusion of Istanbul, the Marmara region supports the "peace process’’ with 59%. In the country’s least conservative Aegean region in the west, where anti-Kurdish sentiments and opposition to Erdogan’s rule is the strongest, 49% of the people appear to be against the ‘’peace process.’’ In the Aegean region, support for the process is a little more than 40%.

The “wise people” activity is a public relations move for the prime minister to change the ratios to become more in favor of the ‘’peace process.’’ But it was this skillful public relations move that made ”peace” and “process” synonymous. Let alone objecting to it, even posing a question as a tactical move risks the danger of being labeled as anti-peace, as noted earlier.

That may explain why the Syrian and Iraqi dimensions of the "process,” which was first named the “Imrali process,” subsequently under Erdogan’s influence became the “solution process" and is now increasingly referred to as the "peace process,” have moved to the back burner and little is said and written about them.

But the influence of developments in Syria on the timing of the "process” is beyond doubt. Starting in July 2012, from the town of Afrin right next to the Turkish border of Hatay, nearly all the Kurdish towns along the border, including the largest Kurdish population center of Qamishli, came under control of the Democratic Union Party (PYD), which is branded as the Syrian extension of the Kurdistan Workers Party (PKK).

Turkey was hoping to control the developments in the Kurdish regions of Syria through the influence of President Massoud Barzani of the Iraqi Kurdish regional government with whom good relations were developed. Erdogan and Barzani were acting jointly against Iraqi Prime Minister Nouri al-Maliki’s exclusively Shiite stances and his Iranian-influenced pro-Assad regime.

July 2012, however, demonstrated to all, including Ankara, the limits of Barzani’s influence on Syrian Kurds.

Similarly, the need to cripple the regional Iran-Syria axis required the removal of the PKK element from that equation. Turkey had no real leverage to dissuade the PKK leaders at their Kandil Mountain headquarters adjacent to Iran. Only Ocalan had the power, influence and vision to exercise such a role. He was brought back from oblivion and let to play a role from Imrali Island that can only be compared to Nelson Mandela’s role, prior to his release from Robben Island in 1990.

The PKK’s escalation of armed struggle had coincided with the declaration of a cease-fire between Iran and the Party of Free Life of Kurdistan (PJAK), the Iranian Kurdish wing of the PKK, in August 2011. PJAK fighters are now waiting in their trenches in the Kandil Mountains. Both the PJAK of Iran and the PYD of Syria are under the PKK's rule with its supreme leader Abdullah Ocalan.

Therefore, the question to be asked is whether what is perceived as “peace” in Turkey is actually an armistice between Turkey and the PKK that will have the PJAK initiate action against Tehran and the PYD against Damascus, or whether Erdogan will not be satisfied until the full decommissioning of the PKK which would substantially signify the “ultimate peace.”

Currently, these are thorny questions being discussed in Turkey. “Peace without substance” is the order of the day.

Yet, the regional dimension of the Turco-Kurdish “peace” needs to be discussed — and it will be done so in my next piece.