The murders of three PKK activists in Paris highlight the centrality of the Kurdish issues in Turkey, Iraq and Syria, writes Cengiz Candar. 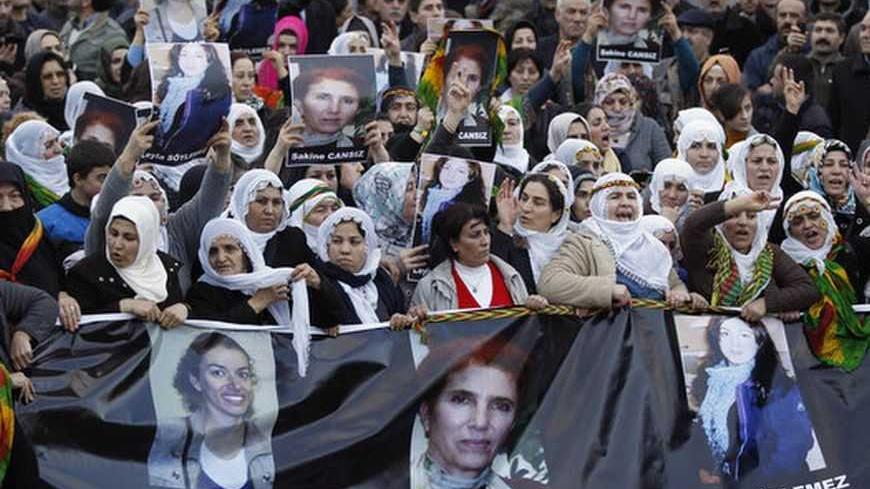 Pro-Kurdish demonstrators march holding a banner with pictures of the three slain Kurdish activists during a protest at the Ataturk International Airport in Istanbul Jan. 16, 2013. - REUTERS/Osman Orsal

One of the greatest effects of Syrian developments on Turkish public opinion has been to show that the Kurdish problem, which is the number-one item on the country’s agenda, has dimensions beyond being an internal problem of Turkey. Especially when some Kurdish settlements in Syria along the Turkish border were quickly abandoned in summer 2012 to the Kurdish Democratic Union Party (PYD) by the Assad regime, the government and Turkish public realized the probability of the emergence of a second Kurdish entity south of Turkey's borders, in addition to the one in Iraq.

The example for Syrian Kurds to emulate was that in Iraq following the collapse of the central Arab nationalist regime. They would go the way of Iraqi Kurds and demand a federal Syria. Since the location and topography of “Syrian Kurdistan” and the number and density of Kurds was different from Iraqi Kurdistan, they would ask for a self-rule in the shape of “autonomy,” if not a federation. But they couldn’t return to their former life.

Two "Kurdistans” below its southern border would inevitably get Turkey into hot water in two ways:

Whatever the case, Turkey would need to make certain changes to its Kurdish policy. Turkey is a country based on very strong centuries-old centralist traditions and not much prone to the decentralized flexibility demanded by new regional dynamics.

The need to move forward and the inhibitions that prevent the necessary changes could not continue to coexist.

The negotiations with Abdullah Ocalan, who has been serving a life sentence now for 14 years on Imrali Island, is the “magic formula” to resolve this dilemma. The process which shall accelerate by the withdrawal of Kurdistan Workers Party (PKK) militants as of this summer, and whose final aim is for the PKK to disarm and stop its armed struggle, has a very vital internal dimension as well as a very important external dimension.

The internal dimension involves the characteristics which will calm down Turkey, start an election campaign at the second half of 2013 and open the way for Prime Minister Tayyip Erdogan to the presidency in 2014. It is dreamed that the circumstances in which the Kurdish problem could finally be solved will be established after the 2015 parliamentary elections.

The external dimension concerns the PKK, which has put itself squarely into the equation of the Iran-Syria axis with the support of Russia following 2011, in parallel to the developments in Syria. The PKK and its Syrian branch, the PYD, have sensed a new chance in Syria and placed themselves between the regime and the opposition, if somewhat nearer to the regime. They have entered a period when they willl be most reluctant to disarm, becoming regional players, far beyond a mere security nuisance for Turkey.

Just as Iran and Syria have become an “ace card” for the PKK, the PKK has become more valuable for Iran and Syria than ever before. Perhaps for Russia, too. At least in the opinion of Turkish decision makers, this what the PKK is: The official discourse discredits the organization, but admits that the PKK is slipping through the fingers of Turkey.

Since it is accepted that it is impossible to dissolve the PKK militarily, and as the experience of isolating Ocalan in prison has sufficiently demonstrated, Turkey played the only card left to control PKK by starting dialogue with its leader.

There might be no one more effective on the PKK than Abdullah Ocalan, thanks to his influence over the Kurdish people and his idolization by the PKK.

Although all hopes are pinned on him, the rulers of Turkey now worry about the probability that Ocalan may not influence his armed organization, which is emboldened by various regional players. Therefore, while offensive language about Ocalan is now avoided by authorities of Turkey, the PKK and even the Peace and Democracy Party (BDP) are branded as extensions of the Kandil command and targets of fierce criticism. Some claim that this is allowing the PKK leaderss on Kandil mountain to march in step with Ocalan.

The external dimension of the negotiations with Ocalan is so important that “external powers” are believed to be intent on sabotaging the dialogue process. It is claimed that a stable Turkey which has succeeded in making a compromise and peace with Kurds through Ocalan shall extend its influence to all Kurds of the region. There are some regional powers that don’t want this.

For that very reason, the killing of three PKK women in Paris last week was immediately assessed as “sabotage to the dialogue process” by all authorities, first by the prime minister in Senegal. In bringing the bodies to Turkey, Diyarbakir risks hosting a great show of force. Erdogan values the Ocalan dialogue so highly as to announce that he would not permit process to be sabotaged.

Another interesting aspect of the matter, the claims about the identity of Paris criminals circulating on the grapevine was expressly stated on TV by Galip Ensarioglu, respected Diyarbakir member of parliament of the ruling party. By showing reasoning parallel to that conveyed above, Ensarioglu said that Iran or even Russia would benefit from the “rupture of dialogue of Turkey with Ocalan,” and could be behind the Paris assassinations.

Indeed, Iran was the most-mentioned name in Turkish rumor mill as the culprit behind the assassinations. Some Justice and Development Party (AKP) members — even the prime minister himself — have suggested that the murders might be a result of an “internal feud in the PKK” while listing various probabilities, but if you look deeply you discover that "internal feud" refers to “the wing of PKK under the control of Iran that wants to continue the armed struggle and to torpedo the indirect dialogue between Erdogan and Ocalan."

It may only be an allegation that Iran is behind the Paris assassination, but the regional tug-of-war between Turkey and Iran may be said to reflect on the PKK. At least, such is the widespread perception among the Turkish public.

Therefore, dialogue with Abdullah Ocalan makes 2013 a “race against the clock.” Either the dialogue will end with a compromise and achieve peaceful results or, if Iran or another external power center are actually closely involved, the Paris assassination is no more than the malicious messenger of a series of bloody events to come.