Omer Faruk Gergerlioglu, a pro-Kurdish Peoples' Democratic Party deputy known to focus on human rights abuses, was stripped of his parliament seat and a lawsuit was filed to close the party March 17. 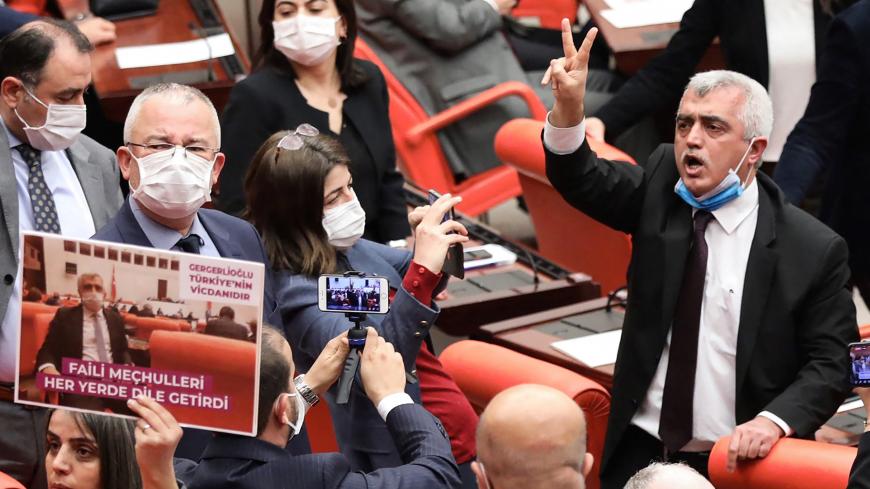 ISTANBUL — Amid a growing crackdown on Turkey’s pro-Kurdish Peoples’ Democratic Party (HDP), a lawmaker was stripped of his parliamentary seat March 17 following a conviction for spreading terrorist propaganda in a 2016 social media post.

Later in the day, a Turkish prosecutor filed a lawsuit with Turkey’s Constitutional Court seeking to officially shutter the HDP entirely.

The Turkish parliament revoked Omer Faruk Gergerlioglu's status as an HDP deputy after a court ruled in February to uphold a 2½ year prison sentence for the lawmaker, a relentless critic of Turkey’s human rights record.

After the decision was read out in the parliament’s assembly hall, Gergerlioglu staged a sit-in with HDP deputies that he livestreamed on Periscope, saying that the move went against the will of people who voted for him and that he would not leave the building on his own accord.

“I am not going anywhere,” Gergerlioglu said in the broadcast. “I have come … with the votes of 90,000 people. I take refuge in the will of the people. We will not bow down to anti-democratic acts."

At the time of reporting, the sit-in was ongoing and Gergerlioglu had yet to be removed from the parliament building.

The developments are the latest signs of growing pressure on the HDP, whose members face a slew of charges over alleged ties to the outlawed Kurdistan Workers Party (PKK). Various HDP leaders have been imprisoned since 2016. While HDP officials deny the charges, nationalist allies of Turkish President Recep Tayyip Erdogan have increasingly called for the party’s closure due to the suspected terror links. "If Turkey is a state of law, the closure of the HDP is an emergency, it is vital, it is a must," Devlet Bahceli, chair of the Nationalist Movement Party, said in a speech earlier this month.

The revocation of Gergerlioglu’s status as a member of parliament comes after two HDP deputies were stripped of their parliamentary seats due to terror-linked charges in June 2020. The March 17 action reduced the HDP’s seats to 55 in the 600-member assembly, where it remains Turkey’s third-largest political party.

In response, human rights advocates as well as lawmakers with Turkey’s main opposition Republican People’s Party (CHP) condemned the move. CHP Istanbul provincial leader Canan Kaftancioglu tweeed that the removal of yet one more HDP legislator was “in violation of the constitution.”

Meanwhile, Milena Buyum, a Turkey campaigner for Amnesty International, said the decision contradicts the goals laid out by Erdogan two weeks earlier when he unveiled a sweeping human rights action plan designed to bolster the rule of law and safeguard freedom of expression for Turkish citizens.

“The decision … sadly indicates that the plan is no more than a window-dressing exercise,” Buyum told Al-Monitor.

She added, “Gergerlioglu is a very outspoken human rights defender who has used his platform to highlight some of the most serious human rights violations — suspected enforced disappearances, prison conditions, torture and other ill treatment allegations. He should never have been tried, let alone convicted. A travesty of justice.”

Nacho Sanchez Amor, the Turkey rapporteur for the European Parliament, and Sergey Lagodinsky,  delegation chair for the EU-Turkey Joint Parliamentary Committee, issued a joint statement condemning the move against Gergerlioglu on March 17, writing, “His conviction, expulsion and expected incarceration” constitute “a severe violation of his human rights” and act to further “undermine the trust in Turkey‘s parliamentary democracy.”

A longtime rights advocate, Gergerlioglu has worked to shed light on human rights infringements in Turkey since he was elected to parliament in 2018. In recent months, he raised awareness over the frequent use of strip searches by security forces and took part in protests against the controversial appointment of a politically connected academic to be rector of Istanbul’s Bogazici University.

Such actions prompted many on social media to call Gergerlioglu “Turkey’s conscience.” Prior to joining parliament, Gergerlioglu posted a tweet in August 2016 encouraging the Turkish state to pursue a peaceful resolution to ongoing clashes with the PKK. In February 2018, Gergelioglu was convicted of spreading terrorist propaganda with the tweet and sentenced to 2½ years in jail, which he appealed.

The ruling was then upheld by Turkey’s Court of Cassation last month, opening the way for Gergerlioglu to be stripped of his seat and parliamentary immunities to serve out the sentence, though he filed a Constitutional Court challenge that has yet to be finalized. In an sssessment of the court proceedings, Human Rights Watch condemned the latest decision, calling it a violation of free speech rights.

“Gergerlioğlu’s 2016 tweet falls squarely within the boundaries of protected speech and there are no grounds on which to argue that it could be either necessary or proportionate to prosecute him for words which state an opinion and do not incite violence,” Human Rights Watch said in a statement March 17.