Pro-Kurdish lawmaker Omer Faruk Gergerlioglu was finally released from prison Tuesday, five days after Turkey’s Constitutional Court ruled his rights had been violated in his detention. 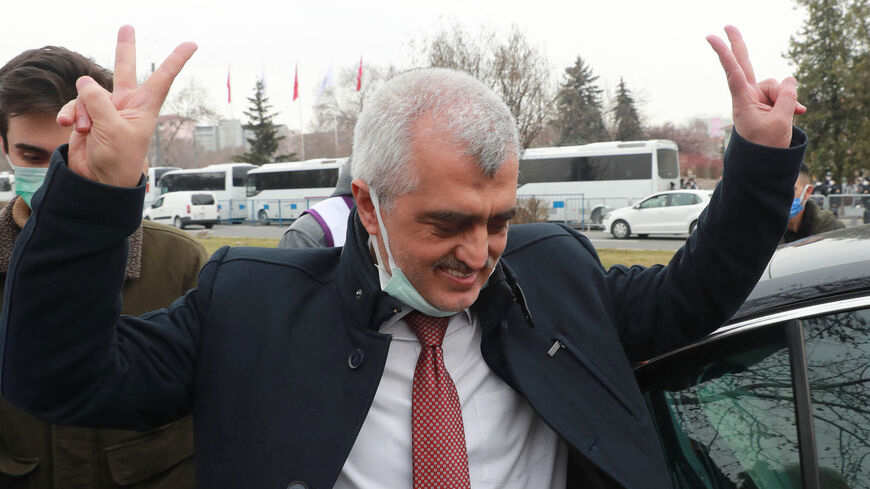 Peoples' Democratic Party lawmaker Omer Faruk Gergerlioglu flashes the victory sign as he is prevented by police from attending Nowruz celebrations in Ankara, on March 21, 2021. - ADEM ALTAN/AFP via Getty Images

ISTANBUL — Pro-Kurdish lawmaker Omer Faruk Gergerlioglu was released from prison Tuesday. Turkey’s Constitutional Court ruled on July 1 that his rights were violated in his detention on terrorism charges this spring. The decision cleared the way for his immediate release and the restoration of his parliamentary seat, but Gergerlioglu remained behind bars an additional five days following the ruling.

Gergerlioglu, an outspoken critic of human rights violations in Turkey and a member of the Peoples' Democratic Party (HDP), was stripped of his parliamentary status in March and jailed weeks later following a court decision to uphold a 2.5-year prison sentence for spreading terrorist propaganda in a 2016 social media post.

The former deputy, who has denied the charges, told Al-Monitor in statements shared through his lawyers that his detention was not an “evil act” against him personally, but an affront on the democratic process and the votes of constituents who elected him to represent Kocaeli province in Turkey’s northwestern region.

“The Constitutional Court finally became a court that renders decisions in line with the law and the constitution,” Gergerlioglu said, welcoming the court’s decision in responses sent to Al-Monitor Monday.

He remarked on his delayed release, “In the digital age, does it make sense to say ‘the decision has not reached us’ for five days?”

On Monday, the HDP began what it called a "justice watch" in front of Ankara’s Sincan Prison, where Gergerlioglu was being held, in effort to pressure officials into releasing him. Four journalists at the event were detained along with Gergerlioglu’s son, Salih, who was released early Tuesday but said in a tweet he was battered by security personnel.

The developments come two weeks after the nation’s top court accepted an indictment seeking to shutter the HDP and ban more than 450 members from holding political office on terror-related charges. Since entering parliament in 2015, the party has come under mounting pressure in recent years that has seen its former co-chairs jailed and dozens of elected mayors replaced by state-appointed trustees.

"What rights? What violation are you talking about? Since when has a traitor had a right?" Bahceli asked, adding the parliament should vote on proceedings seeking to revoke legal immunities from additional HDP lawmakers as soon as possible.

Before being elected to parliament in 2018, Gergerlioglu worked as a doctor until he was dismissed by decree for sharing social media posts critical of a state of emergency imposed following the failed 2016 coup. During his time in office, Gergerlioglu gained notoriety for raising awareness on human rights violations in the country, including a campaign in which he criticized the frequent use of strip searches by security officials.

Throughout his political tenure, he faced court proceedings for allegedly supporting the outlawed Kurdistan Workers Party in a 2016 social media post. Following an appeals process, Turkey’s Court of Cassation upheld his conviction of making terrorist propaganda, paving the way for him to serve a 2.5-year prison sentence. On March 17, Gergerlioglu was stripped of his parliamentary status, and on April 2 he was detained and sent to serve his sentence shortly afterward.

Milena Buyum, a Turkey campaigner for Amnesty International, said Gergerlioglu should not have been prosecuted in the first place as his social media posts fell under protected speech. She told Al-Monitor his case “represents a summary of the criminal justice system being used to crack down on prominent dissenting voices to silence them.”

Buyum said his delayed release following the court ruling was “a salient example of the lawlessness rights defenders like Gergerlioglu are facing.”

Days prior to Thursday’s Constitutional Court decision, Gergerlioglu said in written responses shared through his lawyers with Al-Monitor that he has strived to remain productive during his time in Sincan prison. He said he spent his time thinking about remedies for Turkey’s judicial system and the Kurdish question, which he claimed is now shaped by the HDP closure case.

“What should be known, apart from the HDP, is that most Kurds in this country are unhappy and this ethnic denial, assimilation effort and pressure cannot continue any longer,” Gergerlioglu told Al-Monitor, adding, “For problems to be solved, political channels must be opened.”

He said during his three months in prison he read 32 books, tried to walk 10,000 steps a day in his cell and passed free time listening to birds near his prison courtyard. He described his surroundings as “only concrete and steel” devoid of natural objects like trees or soil, adding Turkey’s so-called "F-type" prisons are designed to isolate people, but that he retained a strong sense of freedom through his daily correspondences and readings.

“In a government that has further distanced itself from justice, honest people will be imprisoned,” Gergerlioglu told Al-Monitor, adding he spent his time in jail “in the best way possible” and “made progress as a person.”