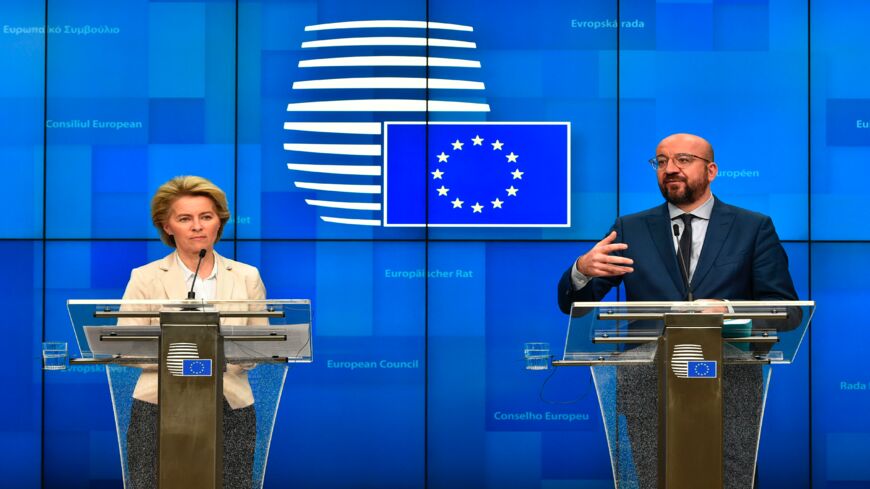 President of the EU Council Charles Michel (R) and European Commission president Ursula von der Leyen (L) give a joint press after a meeting with Turkish President Recep Tayyip Erdogan at the EU headquarters in Brussels on March 9, 2020. - JOHN THYS/AFP via Getty Images)

ISTANBUL — In a rare visit to Ankara on April 6, top European officials sought to improve troubled EU-Turkey relations through a positive but conditional agenda in a meeting with Turkish President Recep Tayyip Erdogan.

Speaking to reporters after the meeting, European Commission president Ursula von der Leyen and European Council chief Charles Michel outlined a dual framework, which, if sustained, offers incentives that would increase trade and cooperation on migration between the EU and Turkey, though both officials highlighted concerns regarding domestic human rights developments.

The framework expands on a positive agenda set last month during a European Council summit based primarily on de-escalation in the Eastern Mediterranean. Michel called Tuesday for continued efforts to resolve maritime boundary disputes between Turkey, Greece and Cyprus over natural gas rights in the region, which have largely subsided since Ankara pulled back energy prospecting vessels from contested waters late last year.

“Our engagement is progressive, proportional and reversible, and we hope Turkey will seize this window of opportunity,” Michel told reporters Tuesday.

Among the top incentives offered by the European officials was a modernization of the EU-Turkey Customs Union, which regulates trade between the two. Leyen said the approach would seek to boost public and private cooperation with a focus on Turkey’s digital transition and green technologies.

The inclusion of such industries was not previously mentioned in EU-Turkey Customs Union talks, said Ilke Toygur, an analyst of European Affairs at the Elcano Royal Institute and a fellow at the German Institute for International and Security Affairs.

“The EU is for sure working on an innovative strategy when it comes to relations with Turkey,” Toygur told Al-Monitor, in reference to Leyen’s comments.

Michel said the prospects for Customs Union talks and other incentives would be assessed following a review of EU-Turkey relations in June.

On migration, the EU officials praised Turkey’s management of more than 3.6 million Syrian refugees living in the country, while adding a 2016 migration pact overseeing irregular migration remains “valid.” It was unclear whether the 2016 agreement would be formally extended, but Michel said the EU commission would soon present a proposal for the continued financing of basic services, education and health care for Syrian refugees in Turkey, Jordan and Lebanon.

Overall, Tuesday’s statements offered few new policies on the EU’s part, though Toygur said the high-level meeting showed both sides were engaging in a constructive agenda.

“More than the content, the visual message is more important: Turkey and the European Union are working on their differences, and they are committed to their relations,” Toygur told Al-Monitor.

The meeting comes amid ongoing democratic backsliding and a worsening human rights record in Turkey. In recent weeks, Turkish lawmakers voted to revoke the parliamentary seat of Omer Faruk Gergerlioglu, a deputy with the pro-Kurdish Peoples' Democratic Party (HDP), and he was subsequently jailed over the weekend on charges of spreading terrorist propaganda in a 2016 social media post.

The development was the latest escalation amid rising pressure on the HDP, which state officials accused of fostering links to the outlawed Kurdistan Workers Party (PKK), a charge HDP officials have denied. On March 17, a top Turkish prosecutor filed an indictment to shutter the HDP, which was rejected by the nation’s Constitutional Court on April 1, though the case may be resubmitted in the near future.

Meanwhile, the Turkish judiciary has yet to adhere to rulings by the European Court of Human Rights calling for the immediate release of former HDP co-chair Selahattin Demirtas and Turkish philanthropist Osman Kavala, who have been imprisoned on terror-linked charges since 2016 and 2017, respectively.

Leyen condemned the decision Tuesday, saying she discussed the matter with Erdogan and human rights issues would continue to have priority in EU-Turkey cooperation moving forward, though she said recent events were “hampering the process.”

“I am deeply worried about the fact that Turkey withdrew from the Istanbul Convention,” Leyen told reporters in Ankara. “This is about protecting women and protecting children against violence, and this is clearly the wrong signal right now.”

In addition, the EU high-level visit came on the same day journalist Melis Alphan stood trial in Istanbul on terror-related charges over a photo she shared from 2015 Newroz celebrations in Diyarbakir that included PKK flags. Alphan faces up to 7.5 years in prison and is one of at least 10 journalists who will stand trial in the coming weeks.

In a statement on April 2, Reporters Without Borders (RSF) said Turkey’s anti-terror laws are being used to “intimidate and silence reporters and media that don’t toe the official line on the Kurdish issue.” RSF ranked Turkey 154 out of 180 countries in its 2020 World Press Freedom Index.

Toygur noted the European Council will likely continue to prioritize a positive agenda conditioned on a continuous de-escalation in Turkey’s region but noted the European Parliament may take up issues concerning Ankara’s human rights record and democratic backsliding in future discussions.

“While the European Council is settling for de-escalation in the Eastern Mediterranean as the main driver of the relations, the European Parliament is not ready to forego Turkey’s obligations as a candidate state for accession,” Toygur told Al-Monitor. “These differences may become very important if we advance with Customs Union modernization, for example, where the European Parliament has a say.”