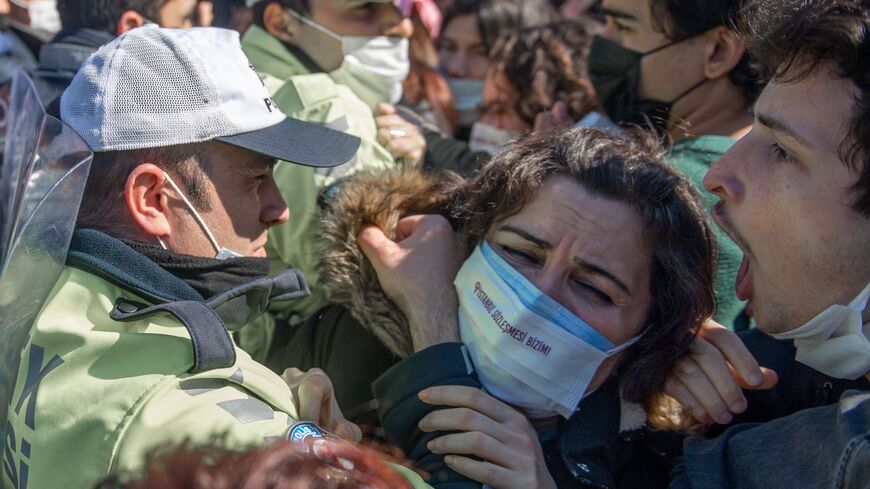 Turkish police block women demonstrating against Turkey's decision to withdraw from the Istanbul Convention at Kadikoy in Istanbul, on March 27, 2021. - BULENT KILIC/AFP via Getty Images

ISTANBUL — In the latest sign of fraught relations between European nations and Ankara, the European Parliament called Wednesday for the suspension of Turkey’s European Union accession talks unless current negative trends are “urgently and consistently reversed.”

In its highly critical 2019-2020 Report on Turkey, the EP cited an ongoing deterioration of democratic and institutional norms in Turkey as well as “aggressive foreign policy moves, including illegal action against EU member states,” as grounds for recommending the formal suspension of accession talks that began in 2005 and have since stalled amid political turbulence.

“The government of Turkey has unfortunately increasingly and rapidly distanced itself from the EU’s values and its normative framework, contrary to what would be expected of a candidate country,” stated the report, which was adopted Wednesday with 480 votes in favor, 64 against and 150 abstentions.

Turkey’s Foreign Ministry rejected the conclusions in a statement Wednesday, condemning the report as a “biased text” that includes “false allegations.”

“The standstill in Turkey's accession negotiations is not due to Turkey’s lack of will for reforms … but, rather, to the fact that certain circles have exploited the membership process as an opportunity for political gains against Turkey since the beginning of this process,” the Foreign Ministry said in its statement.

The EP report paints a dark picture of recent developments in Turkey, highlighting democratic backsliding in the form of state pressure on opposition groups and independent media outlets, as well as the consolidation of governing powers under the executive presidency established in 2018. Its tone contrasts with the positive agenda based on deeper trade ties and reduced tensions in the eastern Mediterranean reaffirmed by the European Council in a March summit and urges a reassessment of bilateral relations to better align with EU principles.

Among the topics highlighted in the report is the ongoing detention of Turkish philanthropist Osman Kavala, whose next trail begins Friday despite multiple European Court of Human Rights rulings calling for his immediate release. Also noted is the continued crackdown on Turkey’s second largest opposition party, the pro-Kurdish Peoples’ Democratic Party, and the April arrest of party deputy Omer Faruk Gergerlioglu after he was stripped of his parliamentary seat over terror-linked charges.

Members of the European Parliament also condemned Turkey’s recent withdrawal from the Istanbul Convention, a European treaty to prevent violence against women, and the conversion last July of Istanbul’s Hagia Sophia back into a mosque.

EP rapporteur for Turkey Nacho Sanchez Amor said Wednesday the report was the most critical in recent years and “reflects what has been the worst period” in contemporary EU-Turkey relations. In a video posted on Twitter, Amor urged Ankara officials to back statements seeking warmer bilateral relations with concrete actions.

“These last statements on Turkey’s rapprochement with the EU, that Turkey is heading towards the neighborhood of the EU, must be reinforced by deeds, not just by programs or by words or statements,” Amor said Wednesday, adding Turkish citizens are “being massacred by public policies that go against any kind of criticism. The EP will always be with Turkish society.”

"We see ourselves in Europe, not anywhere else; we look to build our future with Europe," Erdogan said during a speech in November.

Ilke Toygur, an analyst of European affairs at the Elcano Royal Institute and a fellow at the German Institute for International and Security Affairs, said the last year has been “exceptionally difficult” for EU-Turkey relations. She noted the report held clauses from not only the usual Ankara opponents such as Greece, the Republic of Cyprus and France, but also Austria and Sweden, underlining a tougher stance by EU member states toward Turkey.

“The report and its presentation are another demonstration of increasing divergences of opinion between EU institutions,” Toygur told Al-Monitor. “While the European Parliament asks for treating Turkey as a candidate country and ask for democratic conditionality for any positive development, the European Council already offered a positive agenda with improvements in the eastern Mediterranean.”

Toygur noted the recommendation was not binding, adding former EP Turkey rapporteur Kati Piri made the same petition in her 2019 report.

“I see this as a continuation of the trend,” Toygur told Al-Monitor. “This time, however, the tone has been hardened.”

Apart from seeking improvements in rule of law, basic rights and freedoms in Turkey, the report also included a clause calling on the member states to examine the possibility of adding “the racist right-wing extremist Ulkucu movement, known as ‘Grey Wolves,’ to the EU terrorist list. The ultranationalist group, which is linked to Erdogan’s ruling coalition partner, the Nationalist Movement Party, was seen as spreading in Turkey and EU states, prompting the report’s contributors to suggest a ban on their organizations within the bloc and increased monitoring of the groups’ activities, defined in the report as “especially threatening for people with a Kurdish, Armenian or Greek background and anyone they consider an opponent.”

Turkey’s Foreign Ministry issued a separate statement Wednesday to specifically address the Grey Wolves clause, condemning the measures against what it claims is a “legal movement” as “a case of lapsus mental.”

“Racism and fascism are concepts that belong to Western political jargon, and this political line should not be confused with the perception of nationalism in Turkey,” the ministry said in its statement.